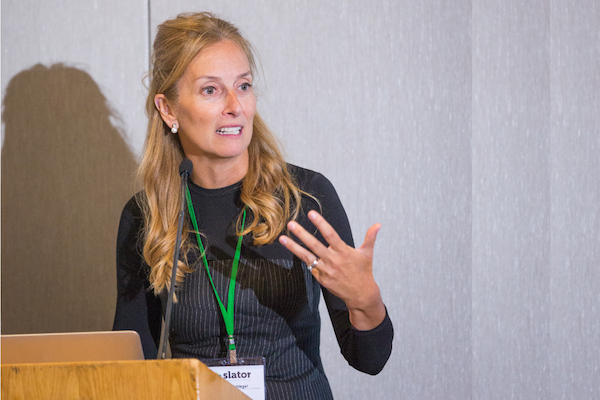 When Schlegel joined NetApp over ten years ago, she “couldn’t see much localized content.” Schlegel was the first person hired onto the localization team and is now leading nearly 200 people across the Globalization, Information Engineering and Product Portfolio teams. It’s a “story of many many twists and turns, but also I am a big believer that luck meets the well prepared” Schlegel said.

One of Schlegel’s first acts was to draw up a business case for the CEO. With a one-slider, Schlegel showed how, in countries that were either English speaking or where large portions of potential enterprise customers understood English (e.g. US, UK, Australia, Nigeria, Germany India and Sweden), NetApp’s products were number one or two on the market at the time. However, NetApp’s products were less visible in countries where potential users would struggle to understand the language that the products and supporting material were available in.

There was a clear business case, Schlegel felt, for globalizing NetApp’s products into additional languages to reach more potential users and to make sure that the company was not “leaving money on the table.” She asked for a team and a budget.

Schlegel started with the basics: installing TMS, selecting vendors and reviewers, recruiting department champions, and making a few key hires. The priority was to start working with the Marketing team along with the related departments of Sales and Channels. All aspects were addressed: SEO keywords, marketing materials, demand gen, launches and campaigns. Schlegel admits that the team “got really great at launches but were initially scared to tackle products that have over a million lines of code.”

“It’s a story of many many twists and turns, but also I am a big believer that luck meets the well prepared”

These products were initially daunting for Schlegel’s team precisely because of the long and complex nature of the code. But Schlegel told the SlatorCon audience how her team took the bold move of effectively piloting one product for the Japanese market: they “bifurcated the code and localized into Japanese to do a proof of concept. A sort of A/B test learned in marketing.” Within the first week of launching the Japanese product, Schlegel said, the company had “opened up sixty million dollars of untapped revenue” and “since that day, our Japanese customers have not downloaded the English versions any longer”.

Schlegel soon inherited a team of information engineers, technical writers, and content architects who lead the product information plans for all NetApp offerings. She saw a lot of similarities across the Globalization and Information Engineering teams: both were focused on customer experience and had a passion for content, standards, proper systems and architectures.

The merging of the two teams brought globalization closer the authors of the technical product plans, and the product managers themselves, which was an essential step in understanding the products and the role that content plays across the company, Schlegel said. Together, they had the expertise to embark on developing an enterprise content strategy that is today a key player and leader in a company Forum.

“Now we have the whole company globalized”

Schlegel continued to highlight the importance of getting the right people onside: whether it’s seeking out executives across the company in order to map the buyer’s journey from beginning to end, which allowed the team to decide “that’s what we are going to write and that’s what we are going to globalize,” or making use of champions across the organization to make sure that Globalization became ingrained into the fabric of the company, from IT to legal passing by HR.

At first, Schlegel said, NetApp was “localized in a few areas. Now we have the whole company globalized.” Schlegel’s team also now runs a “Globalization Forum where we have the Heads of all Departments telling us what the important countries, products, practices and goals are.” This all feeds into a content strategy for the company, with globalization at the heart. In fact, the team is “so connected to the general managers of the business units that yesterday they announced we are number one in in Japan and today we announced a NetApp-Lenovo JV [joint venture],” Schlegel reported proudly.