At F8: Facebook Says It Now Has a ‘Powerful Tool to Think About Language Problems in a Language Agnostic Way’ 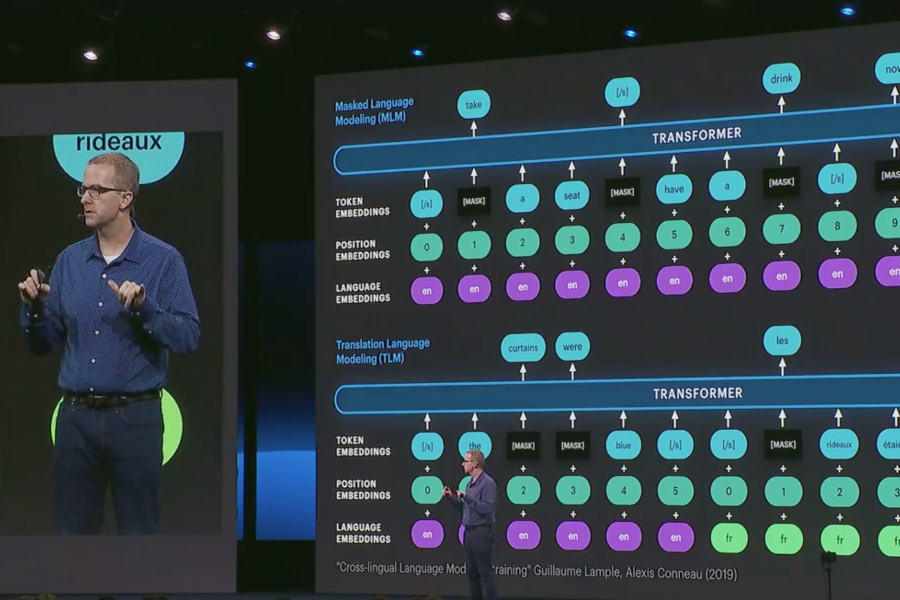 How does a social media platform with over 1.56 billion daily active users on average cope with spam, fake accounts, hate speech, and other undesirable forms of content? Facebook thinks the answer is artificial intelligence (AI). At the tech giant’s F8 2019 developer conference from April 30–May 1, 2019, Facebook explained how it intends to combat harmful content.

CTO Schroepfer said that AI can help fight harmful content — from simple things like spam to more serious threats such as bullying and terrorist propaganda.

Spam and fake accounts are such a huge ongoing problem that, in the third quarter of 2018 alone, Facebook identified and removed over 1.2 billion pieces of spam and over 700 million fake accounts. On top of that, Facebook had to contend with text, audio, photo, and video content in multiple languages; which is where NLP comes into the picture.

A priority of the Facebook AI team is to leverage developments in NLP to more effectively filter out harmful content. Schroepfer said that while their current NLP technology has improved by leaps and bounds from just four years ago and can detect most types of harmful content at over 90% accuracy, it still struggles with hate speech and harassment.

The company says its current NLP technology successfully manages to act on hate speech and harassment only 51.6% and 14.9% of the time; the rest of the time, Facebook users manually reported harmful content.

Schroepfer noted how developments in machine learning are helping them improve their AI technologies, including their in-deployment NLP and NMT, which are the front line of defense against harmful speech. NLP can classify a piece of text content as harmful, while NMT ensures that NLP can classify text in multiple languages.

He explained a key development, called self-supervised machine learning, which is increasing Facebook’s AI capabilities across the board, from text to image to video.

From Supervised to Self-Supervised

According to Schroepfer, supervised learning is “the basic technology that has powered most of what we’ve progressed in the last five years.”

However, supervised learning is fairly specialized in that instances not found in the training data will also remain unidentified in production. Furthermore, the process from training to deployment is manual and slow because of the human labeling process.

Schroepfer then introduced self-supervised learning, which he explained with the help of a textual example from Google’s BERT or Bidirectional Encoder Representations from Transformers.

“Instead of building these manually labelled training sets, what you do is you take a big pile of data — say 80 million documents — you take the sentences in those data, and then you automatically adjust them in some way. In this case (using text documents), you mask out certain words, and then you train an algorithm to try to predict what those missing words are,” Schroepfer said.

First, since the training data was adjusted (in Schroepfer’s example, some text was masked) then the answers are already known. There is no need for human supervision through the labelling process. This likely reduces the amount of work sent to companies like Appen, which has had a phenomenal ride curating data for machine learning applications over the past few years.

Second, since the training data and answers are generated at the same time, it is fully automated; which means massive amounts of data can be used again without the manual, time-consuming human supervision process.

Self-supervised back translation — where synthetic training data is derived from monolingual corpora — is currently in production at Facebook, Schroepfer said. As an example, he cited its use against misinformation and coordinated interference in the ongoing elections in India.

Speaking at the same forum, Manohar Paluri, Director of Artificial Intelligence at Facebook, said, “AI is our best bet to keep people safe on our platforms.”

Facebook’s goal for AI, Paluri said, was to “understand content with less supervision.” In other words, remove as much human supervision as possible without affecting the function of understanding content on the Facebook platform.

Referring back to the self-supervised machine learning models Schroepfer introduced, Paluri revealed that when they applied this approach to speech recognition, they needed 150 times less of the labelled data to achieve the same results.

“This gives us a powerful tool to think about language problems in a language agnostic way.” — Manohar Paluri, Director of Artificial Intelligence, Facebook

Paluri also spoke on Facebook’s latest progress in unsupervised NMT: “Previously, we needed to build a model for each language. We found a way around this. We trained a model where multiple languages live in the shared representation space; and if two sentences mean the same thing, they are mapped closer to each other in this learned representation space. This gives us a powerful tool to think about language problems in a language agnostic way.”

Paluri said Facebook trains this shared representation model in 93 languages, 30 language families, and 22 different scripts. He added that this unsupervised NMT model allows Facebook to better tackle potentially harmful content in low-resource languages where they do not have enough training data.

Wit.AI is essentially a free NLP service where users can develop multilingual chatbots and integrate them into their Facebook business pages. Wit.AI is built into Facebook Messenger for easy deployment and is available in 23 languages. The technology itself does not translate languages — when a customer interacts with a Wit.AI chatbot in a language other than its default, it can automatically reroute the interaction to the Wit.AI chatbot in the right language, if one is available. Otherwise, it will just attempt to answer in its default language.

As for FBT, Facebook Software Engineer John Watson explained that Facebook’s internationalization markup language and framework helps developers on Facebook internationalize their work into over 100 languages and dialects.

“Our translators produce over two million translated words every week, an amount equivalent to double the Harry Potter book series,” Watson said, adding that over 57% of Facebook users are non-English. FBT helps developers by “lowering the burden it takes to coordinate translations in their apps” via a self-documenting, code-base searchable inline markup language.

The FBT framework provides everything outside translations and storage, according to Watson, which includes text extraction and translation dictionary generators. FBT also incorporates built-in constructs for handling common multiplexing pitfalls, such as pluralization and gender.