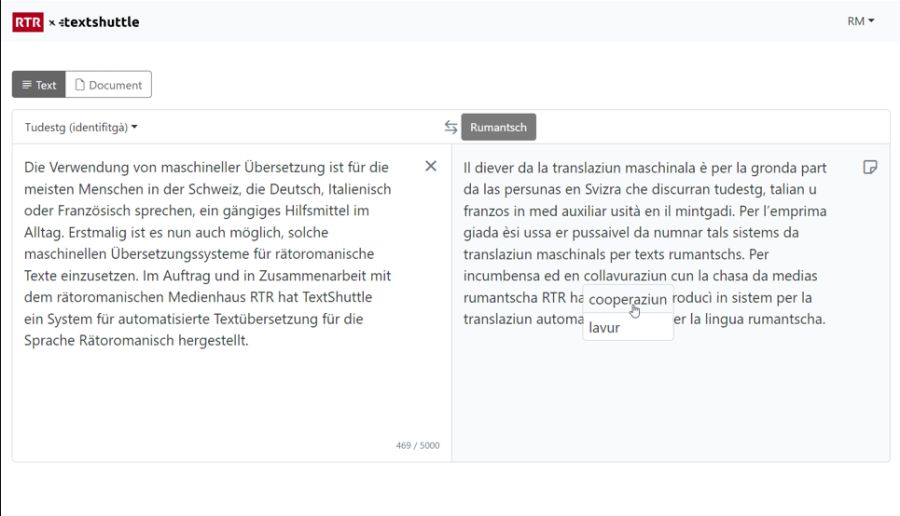 Text translation with the help of artificial intelligence is widely spread in Switzerland for the national languages German, Italian and French. But now, for the first time, automated translation from and into Romansh is finally available. This is made possible by a collaboration between the Swiss companies Radiotelevisiun Svizra Rumantscha (RTR) and TextShuttle.

Machine translation is a common tool in everyday life for most people in Switzerland who speak German, Italian or French. Now, for the first time, it is possible to use a machine translation system for Romansh texts. On behalf of and in collaboration with the Rhaeto-Romanic media company RTR, TextShuttle has developed a system for automated text translation for the Romansh language.

The company based in Zurich and RTR use state-of-the-art technologies and existing language resources to develop the translation solution and thus actively contribute to the preservation of this Swiss national language. During an initial test phase in the spring of 2021, the two companies worked intensely on the translation from Romansh to German. In the scope of this project, they managed to have all Romansh idioms recognised as the source language. After this first successful collaboration, TextShuttle and RTR started working on the opposite direction from German to Romansh in the summer of 2021. This project phase was completed in spring of 2022. If Romansh is selected as the target language, the text is translated into Rumantsch Grischun (official language). However, it is conceivable that individual idioms may also be taken into account in future projects.

The translation is created using neural networks (artificial intelligence). During a training session that lasts several weeks, the language model learns the translation mechanisms based on existing data by repeatedly showing the model existing translations. The development is driven by iterative processes, which are continuously adapted and improved by the latest technologies. Native speakers support this process by evaluating the translations at a specific point and providing feedback for improvement.

The challenge with Romansh is that there are very few existing language resources compared to more widely used languages. In the development process, existing data are processed, aligned and cleaned before they can be used for training. A total of 200,000 parallel segments have been used so far, which originate from existing, freely available data such as legal and press texts of the canton of Graubünden. Furthermore, existing data from RTR are incorporated into the training sessions and prioritised – this makes the system specialised in the texts of RTR and particularly suitable for their text types.

The initial results are promising and have been perceived as helpful in everyday practice by language experts. Automated translation can be conveniently used for single words, full texts or Word documents in the web interface, the so-called Translation UI, and works similar to freely available translation services. In the future, RTR will use machine translation to facilitate editorial work; by having texts pre-translated using automated translation, the texts then only need to be reviewed and slightly edited.

In the future, it is well possible that the Romansh translator will be offered as an online service in order to provide the whole Swiss population with access to the Romansh language.

For those who want to get to know the Romansh language better after this great news, our test platform try.rumants.ch can be used free of charge until 31 July 2022.

TextShuttle is an independent provider of machine translation solutions focusing on data security and corporate wording. Founded as a spin-off of the University of Zurich, the company has close ties with leading research institutions and currently employs 17 experts in machine learning and translation technology. TextShuttle’s AI-based translation software is used by thousands of employees and dozens of professional translation teams in Swiss and multinational corporations such as SwissLife, Migros Bank and the OBI Group.

Radiotelevisiun Svizra Rumantscha (RTR) is a subsidiary of the Swiss media company SRG SSR. RTR, headquartered in Chur, is the only company to fulfil the audiovisual public service mandate for the ‘Svizra rumantscha,’ Rhaeto-Romanic Switzerland. Beyond the actual Romansh language area, the company sees itself as ‘acting as a bridge in the linguistically diverse Canton of Graubünden, for the Romansh-speaking people in the diaspora throughout Switzerland and beyond the national border.’ More information is available at rtr.ch.