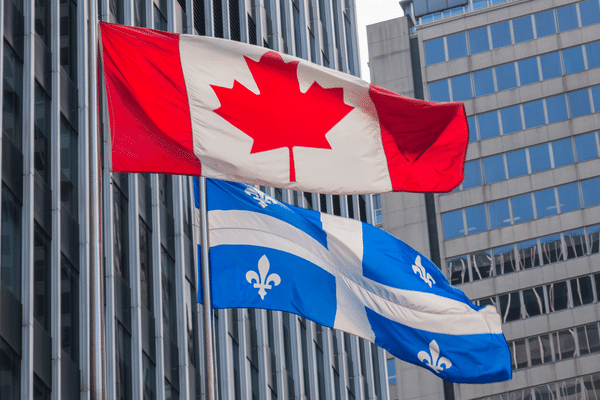 In a coup for Canadian Francophiles, Québec’s National Assembly adopted Bill 96, “An Act respecting French, the official and common language of Québec,” on May 24, 2022. Bill 96 officially became law June 1, 2022.

Simon Jolin-Barrette, Québec’s Minister of Justice and the French Language, introduced the bill in 2021, with the goal of promoting French as Québec’s only official language.

As reported by The Guardian, the leftwing Québec Solidaire lent support to the governing Coalition Avenir Québec to pass the bill, 78 to 29. Québec Premier François Legault celebrated the bill’s passage. Still, as expected, Bill 96 had its opponents, including provincial Liberals, separatist Parti Québecois, certain Anglophone organizations, and indigenous groups.

So, what exactly does Bill 96 require? While some changes have already taken effect, others will come into play at a later date.

The bill limits the use of English in the legal system and caps enrollment at the province’s English-language schools. Within six months of arriving in Québec, new immigrants and refugees must be able to communicate with provincial officials exclusively in French, or risk a loss of services (though the Québec government has stated that healthcare will be exempt from this requirement).

Québec-based businesses (or those with operations in Québec) face more stringent regulations regarding the use — and primacy — of French in contracts, inscriptions on products, as well as communications with clients and employees.

Signs and publicity campaigns came under scrutiny back in 2016, when then-Minister of Culture and Communications Hélène David proposed a requirement that outdoor signage include French.

While the basic rule has not changed — French must be “markedly predominant” on public signs and posters — non-French trademarks must be registered under the federal Trademarks Act in order to be exempted, beginning June 1, 2025.

Private parties entering into certain kinds of contracts must have the opportunity to review a contract in French before opting to proceed in English only.

Businesses operating in Québec that fail to serve clients in French now face possible fines, as well as lawsuits from customers, whose previous recourse was filing a complaint with a government agency.

While the impact of the new regulations — ultimately a modification of existing Bill 101 — are not yet quantifiable, local language service providers (LSPs) may anticipate at least a short-term uptick in business.

Mary Kazamias, CEO of Montréal-based TRSB, told Slator that several clients have already begun to assess how best to comply with the new law.

“For the time being, most of the content that seems to be impacted are employment-related materials, policies and procedures, and some legal materials,” Kazamias said. She added that, so far, it looks like customers in most industries, from environmental management to banking, from retail to communications, will be affected in some way.

According to Kazamias, however, businesses interested in expanding into Québec should not be deterred by the new regulations: “Our province continues to be a thriving market for businesses in all sectors, including translation!”