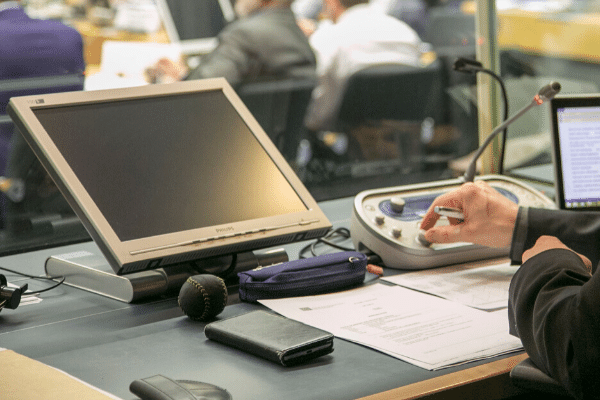 From the time Covid-19 was first confirmed to have reached two European Union institutions (i.e., the Defense Agency and the Council) in early March 2020, the EU stepped up teleworking. By month’s end, nearly 100% of those working at EU institutions were doing so remotely.

While such containment measures were unavoidable, so too was the fallout. Among those most badly hit were the more than 3,200 contract interpreters working for EU institutions, about 40% of whom have regular contracts, according to the Association of Conference Interpreters (AIIC), an international trade union.

In an emailed press statement, the trade union said that freelance interpreters are responsible for over 50% of the simultaneous interpretation at meetings and conferences organized by the EU; the rest being covered by staff interpreters.

“Conference interpreters are facing financial losses that, in some cases, represent up to 100% of their income. Because of the nature of their contractual relation with the Institutions, most freelance interpreters will not be eligible for national aid measures, even if their Member State of residence were to adopt support measures for this category of workers,” the AIIC said.

A source close to the matter said the AIIC has been in Covid-mitigating talks with EU institutions since early April, negotiating on behalf of the freelance interpreters, commonly referred to as auxiliary conference interpreters or ACIs.

Central to these talks is what the AIIC described as “deferred contracts — essentially a loan — to [the EU’s] freelance interpreters to compensate for loss of income during the pandemic.”

Canceling Contracts on a Rolling Basis

In another press statement, dated May 27, 2020, the group said that EU institutions had been canceling contracts “on a rolling basis” since the last week of May and that two of three interpreting service providers within the EU, namely the DG SCIC (Commission) and DG LINC (Parliament), had proposed the mitigating measure.

“ACIs will receive a one-off payment for [the deferred] contracts shortly after accepting the package, and will have to work off the days” before December 31, 2020, the same statement said. The AIIC added, “The Institutions should go further than a loan of 1300 euros to cover 3–6 months without work and offer proper help during such an unprecedented crisis.”

Contacted by Slator, Claire Joawn, Press Officer at the European Commission, said that what they offered was not “a one-time repayable loan” but “a contract-based mitigating measure with advance payment to bridge [June and July], the months of lower demand.”

“All contracts with assignment dates in the period between mid-March and end May 2020 so freelance interpreters have been paid in full up until the end of May” — Claire Joawn, Press Officer, European Commission

Joawn explained that they “had to cancel contracts in June and July, on a weekly basis” to account for the drastic decrease in interpretation demand, but that “notice was given for this, fully in line with the contractual basis for freelance interpreters.”

She added that the Commission decided to honor “all contracts with assignment dates in the period between mid-March and end May 2020 so freelance interpreters have been paid in full up until the end of May. This action had a considerable financial cost (EUR 3.9 million for the Commission), which was borne by the institution despite a lack of actual assignments for freelance interpreters.”

The solution they came up with, according to Joawn, means that the ACIs would be “paid up front for services delivered later in the year,” which she described as “both legally and financially sound for the institutions.”

According to Tom Van den Kerkhof, an ACI working for all three main EU institutions (i.e., the Commission, Parliament, and Court of Justice), “the use of ACIs is a cost-saving measure for the [EU] under normal conditions, as our recruitment patterns strictly follow the demand for interpretation.”

Spending anywhere from 120–150 days in the booth “on a typical good year” makes Van den Kerkhof one of the ACIs who rely on the EU as their main source of income. He told Slator, “You could say that, on an average week, I spend 3–4 days in the booth. And I love every day of it. We are often in a very privileged position to witness firsthand how European politics evolve.”

“It is not a workable solution for the people who have been working only for the institutions” — Esa Hartonen, EU conference interpreter since 1996

Although he had started working as a self-employed translator in Belgium in 2004, four years after first working for the EU, he had “always kept these activities below a certain level because, in my heart, I am a conference interpreter.” He said the EU’s solution, “a loan of EUR 1,300 for possibly six months of inactivity” was “unworthy of a public entity.”

Esa Hartonen, an ACI at EU institutions since 1996, said he has been augmenting his income by working for the private sector in Germany. Hartonen said, “My initial reaction [to the EU’s solution] was: it’s better than nothing. But it is not a workable solution for the people who have been working only for the institutions, because they can’t live only on that loan of around EUR 1,300. Anyway, I would probably accept the offer and consider it as a work offer. I heard that you had to have worked at least 40 days a year. I just checked and I worked 41 days last year for the institutions.”

For Barry Doran, work as an ACI at all three main institutions “has made up 99% of my earnings over the past 10 years.” He has been left without any sort of income since work stopped, Doran told Slator, adding, “Given that I pay my taxes directly to the EU, and not into any national system, I am ineligible for financial support in my country of residence (France). However, I am fortunate enough that my spouse has a steady job and we have a source of income in our household, even though my earnings have completely dried up. While far from being sufficient in the long run, our household’s income should see us through for a few months at least.”

Doran said that a number of staff interpreters, his colleagues from the Commission and Parliament, came together to set up an emergency fund for ACIs most in need. He said seeing staff interpreters contributing into the fund out of their own pockets was “a real morale boost […] at a time when the institutions themselves have yet to offer us any support worthy of the name.”

“It really testifies to a striking lack of respect for all us ACIs who have worked with pride for the EU institutions over many years” — Barry Doran, EU conference interpreter since 2010

His first reaction to the EU’s solution was one of disbelief, Doran said. “The wording of the offer seemed ambiguous to me, and I had initially thought that the offer was to be made per month over the course of several months. It was inconceivable to me that the EU institutions’ idea of support was a one-off payment of some EUR 1,300 in return for days to be worked later, to cover loss of earnings from March until September, or perhaps even longer. But when I finally realized that the offer consisted merely of a small loan, I felt hurt and let down. It really testifies to a striking lack of respect for all us ACIs who have worked with pride for the EU institutions over many years.”

Michelle Hof said she is “immensely grateful to our staff colleagues for this touching show of solidarity” in setting up an emergency fund for their ACI colleagues and hopes that EU institutions “will be able to show the same solidarity by negotiating a relief package through constructive social dialog.” Hof has been an ACI for 20 years at the Commission, Council, Parliament, and Court of Justice, and said her work for the EU makes up about 70% of all her earnings. She does not qualify for national relief measures in her country of residence (Spain).

“We are immensely grateful to our staff colleagues for this touching show of solidarity” — Michelle Hof, EU conference interpreter since 2000

On first learning about the EU package from an interpreter intranet, she said, “My main reaction was, and continues to be, one of puzzlement […] I don’t know how the Institutions arrived at the figure of EUR 1,300 for this one-time advance payment or loan against future work. I can’t see how anyone could imagine that this amount could in any way constitute true relief, given the fact that the crisis has been going on since March and it is clear that it will continue for some months yet.”

According to Press Officer Claire Joawn, the interpretation services of the European Commission have “put a lot of effort [into] the right technical conditions to bring multilingual communication back to EU meetings — and thus increase contract opportunities for freelance interpreters.”

She said they had already installed “so-called interpreting platforms in the meeting rooms” of two institutions so interpreters can “work in an ISO-conformed environment in the booth, while respecting social distancing.”

The flagship use of the new setup was the Coronavirus Global Response Pledging Conference on May 4, 2020, Joawn said, adding that “Interactio technology has been installed in more meeting rooms and the technical conditions are constantly improved; more meetings will be served in June / July.”

Meanwhile, trade union AIIC said, “ACIs are asking for what has already been adopted for the millions of European self-employed workers in need: an ad-hoc instrument to provide emergency support until the disruption caused by the COVID-19 pandemic is behind us.” A source close to the matter said the AIIC has several options on how to proceed, but is awaiting a reply from the institutions.

For Van den Kerkhof, and most likely his ACI colleagues as well, the next step is to “find an alternative source of income — like expanding translation work — and keep hoping a decent and equitable solution will be found.”