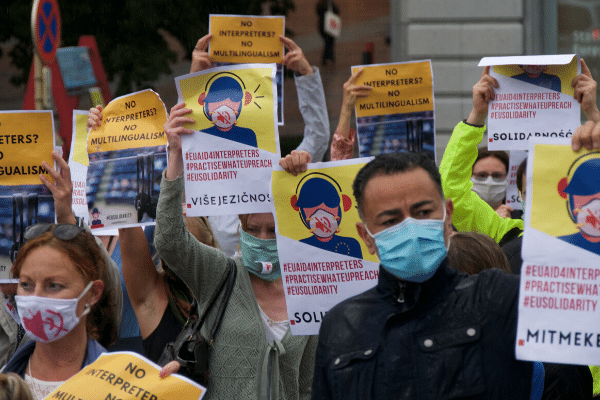 It was half past two on the cloudy afternoon of June 17, 2020 when some 70 contract interpreters working for EU institutions congregated in front of the European Parliament at Place du Luxembourg in Brussels in what participants described as a socially-distanced flash mob.

The reason, to draw attention to their dissatisfaction over the EU’s offer of a “mitigating measure” as bookings vanished in light of Covid-19, as well as the continued lack of proper social dialog with the EU institutions, said sources close to the matter.

Contract interpreters (commonly referred to as auxiliary conference interpreters or ACIs) are responsible for over 50% of the simultaneous interpretation at meetings organized by the EU; the rest being handled by staff interpreters.

As previously covered by Slator, ACIs were “puzzled” and “hurt” by the EU’s mitigation offer after Covid-19 containment measures caused the cancellation of their interpreting contracts.

While an official spokesperson of the EU called the offer “a contract-based mitigating measure with advance payment to bridge the months of lower demand,” ACIs regarded it as “a loan of EUR 1,300 for possibly six months of inactivity,” which was “unworthy of a public entity.”

Meanwhile, although interpretation work is slowly picking up, “there is still not enough to earn a genuine income,” according to Tom Van den Kerkhof, an ACI working for all three main EU institutions (Commission, Parliament, Court of Justice).

Van den Kerkhof told Slator, “We see a very limited number of contracts being offered to ACIs who have their domicile in Brussels. But for non-local ACIs — interpreters who live in their home country and travel to and from Brussels and Strasbourg and are, therefore, more expensive to recruit — contract offers are still very much a thing of the future.”

He added, “If the European Institutions don’t offer a genuine support measure to their ACIs soon, there is a real risk that ACIs will have no other alternative than to look for another job. After all, they need a livelihood to provide for their families.”

Van den Kerkhof and other ACIs actively seeking redress said their action was, ultimately, not only about the lack of support for the EU’s contract interpreters but also about multilingualism as a founding principle of the European Union. Van den Kerkhof concluded, “The potential brain drain may eventually threaten multilingualism since not enough interpreters will still be around when activities pick up.”