As the world’s fourth largest economy, Germany is home to dozens of powerful multinational corporations like Volkswagen, Allianz, and Siemens and hundreds of so-called hidden champions, who dominate a particular niche in the global supply chain.

Germany relies heavily on exports, which is expected to result in the world’s largest trade surplus in 2018 of nearly USD 300 billion. Total exports amounted to over USD 1.4 trillion in 2017, which is fertile ground for language service providers (LSP) helping companies market their goods and services on the global market.

Compared to many other large economies, however, Germany’s language industry remains exceptionally fragmented. While the leading LSPs in the United States or the United Kingdom generate revenues of several hundred million US-Dollars, Germany’s largest LSP, Kern, reported sales of USD 54.6m for 2017.

M&A activity in Germany has picked up somewhat in 2018 with private equity backed conglomerate T-Works being formed, Wieners+Wieners acquisition of LÓPEZ-EBRI, and Straker buying Eule before its IPO. This level of deal-making barely moves the needle in a market where, as Slator has now found, nearly 500 language service providers compete for business.

Combing through data from Germany’s Federal Gazette as well as numerous local Commercial Registries (aggregated by a paid service and curated by Slator), Slator prepared a list of 468 language service providers, which are listed as active in commercial registries and categorized under the industry code 74.30 for Translation and Interpretation. The overwhelming majority of companies listed are incorporated as GmbH.

Slator organized the information into the following categories:

Please note that categories marked * are not available for each company. Balance sheet information, for example, is available for 203 companies on the list. 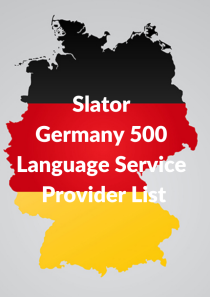 Disclaimer: Slator compiled this information from publicly available sources and disclaims any responsibility for its accuracy.