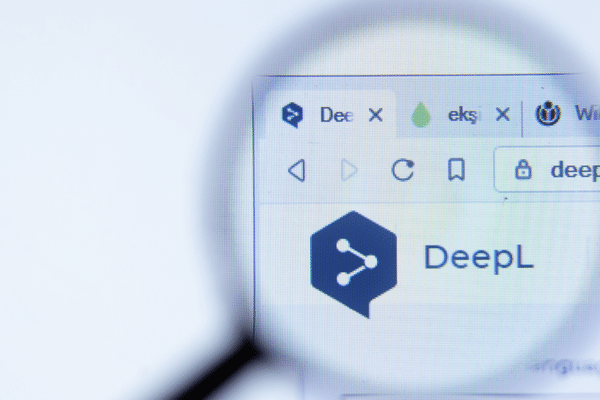 Would you like to work for the world’s fastest-growing machine translation (MT) company? Spoiler alert: This is not a job ad. It’s an analysis of the profiles and roles behind DeepL, arguably one of Germany’s most successful technology startups of recent years.

As previously mentioned, Germany-based DeepL is moving aggressively into the enterprise. To do so, DeepL has bulked up on its client-facing personnel, including customer-service support, account executives, and account managers; all mandated to service and grow the company’s enterprise customer base.

We trawled more than 300 LinkedIn profiles that list DeepL as their current company and categorized them into seven different functions in order to analyze them.

As of mid-September 2022, more than a third of LinkedIn profiles connected to DeepL have job titles relating to product and software. This function is, by far, the biggest at DeepL and includes roles such as Senior Product Manager, Engineering Manager, and Web Developer.

Around 15% of profiles with DeepL listed as their current company hold corporate job titles (e.g., legal, financial, marketing, general management), while around 13% are in language-related roles. (Of these, a fairly big portion are freelance translators who list DeepL as their current workplace, typically among others.)

We also noted that 12% of profiles have job titles related to account management and customer support. A slightly lower percentage of profiles (11%) occupy research and data-related roles such as Research Scientist or Data Engineer.

Profiles that list job titles relating to recruitment and talent management, business development and sales, and project management are fewer in number. Around 8%, 5%, and 3% of DeepL profiles, respectively, list these types of roles.

We also analyzed the LinkedIn profiles currently associated with DeepL based on the year they state as having joined the company. A further eight profiles did not specify the year of joining so were discounted from our analysis. Also discounted, two profiles for which the job title was unspecified.

The data on current profiles linked to DeepL provides a somewhat limited view, particularly of previous years, as it speaks mainly to the length of service rather than the number of people who actually joined DeepL in a given year.

For example, a number of people may well have joined the company in 2019, but may have left between then and now. However, one can assume a relatively high retention rate across DeepL, and it is still possible to provide a picture of how the composition of the organization has evolved over time.

Of all the LinkedIn profiles with DeepL as the current company, the vast majority (more than 80%) said they joined DeepL in the past couple of years.

All of the LinkedIn profiles with DeepL as their current company that are in account management and customer-support roles joined in 2020, 2021, or 2022, reflecting DeepL’s strategy of targeting the enterprise. The same is true of business development and sales roles.

Many of the LinkedIn profiles with project management job titles as well as recruitment and talent management roles list their joining year as 2021 or 2022 — which is what one would expect from a company going on a hiring spree and building a more custom enterprise offering. Meanwhile, most of the profiles with product and software or research and data roles list their joining years as 2019 and later.

According to LinkedIn data, DeepL has made a number of senior hires over the past few years. DeepL’s Head of Finance, Peter Hartmann, joined in 2019, as did Christian Schneider, who is now Head of Web Development.

In 2020, DeepL brought in a Head of Revenue, Céline Daley. Daley’s LinkedIn profile states she is the “first commercial leadership hire entrusted to build out and lead all commercial functions from inception to 70+ team members, including Sales, Marketing, Customer Support, Revenue Operations, Language, and Localization.” She also “opened [the] London office in 2021 and [serves] as Managing Director of DeepL UK Ltd.”

DeepL also appointed a Vice President of Product, Christopher Osborne, in 2020. Osborne joined DeepL from Booking.com, where he held the position of Director of Product Management for six years. The company’s now Head of Product Design, Elena Borisova, joined the same year (initially listing her job role as “product design and strategy”) and is based in the Netherlands.

DeepL CFO, Markus Harder, joined in 2021 having previously served as CFO and MD at Contentful, the Germany-based content management platform.

In 2022, Yimeng Ding was appointed Head of Customer and User Research at DeepL. Ding joined the company after a year-and-a-half stint at Zalando; and, prior to that, worked at Booking.com from 2014–2021. She also worked as a UX researcher at Amazon for two years.

Japan Country Lead, Shigeharu Fujiwara, joined DeepL in 2022 after having spent four and a half years in sales roles at Slack. DeepL added Japanese MT in March 2020 and has seen rapid success in Japan. It took less than 17 months from release to becoming the 30th most popular website in the country.

Although DeepL clearly remains a product-focused company at heart, its addition of corporate and customer-facing roles in recent years means the world’s fastest-growing machine translation company is now well positioned to compete head on with tech-enabled language service providers (LSPs).