The European Union Court of Justice runs a mammoth legal translation service, staffed by over 600 so-called lawyer-linguists, which is responsible for translating legal documents for the Court. The service is managed by the EU’s Directorate-General for Translation (DG Translation).

Yet even such a well staffed unit requires external capacity to manage the language industry’s notorious peaks and troughs in volume. So the Court outsources around one-third of its translation work to freelance linguists.

On December 16, 2016, the Court issued an invitation to bid for a new framework contract worth EUR 6m. Crucially, the Court is looking for proposals for what it calls “natural persons,” that is, freelance translators. Language services providers (LSPs) need not apply.

A spokesperson for the Court told us the contract, which is divided into 11 lots (per language), is a new contract, not a renewal. This would imply the Court to date has not used an overarching framework governing its use of freelance translators.

The same spokesperson cited the tender notice, saying the list will determine the initial order — based on output capacity and possible field of specialization – in which freelancers will be offered work.

According to the Invitation to Tender contractors are classified based on the quality of their translation work as assessed during tests, as well as the competitiveness of their asking rate. So how much can freelancers expect the Court of Justice to pay?

The tender notice shows 2015 price averages based on “total price per standard page of 1,500 characters, not including spaces, in the source language.” Interestingly, the highest rate paid was for Polish into English at EUR 49.26 and the lowest for Lithuanian into English at EUR 20.18.

What Freelancers Can Expect

According to documents from the DG Translation, freelance translators will be under framework contracts that do not constitute orders. In short, winning the tender simply puts the freelancer on the list, but does not guarantee work. The framework contracts will last one year and shall be tacitly renewed for a possible three more years.

The Court of Justice should be able to contact the freelance translator within, at most, eight hours (unless a case is more urgent) for the freelancer to accept or decline work.

The freelancer will be expected to work with texts that have been processed using translation productivity tools. More specifically, freelance translators must be able to handle and submit “files containing both the source text and any translation correspondence obtained from the internal translation memories of the Court,” such as in XLIFF format or equivalent. 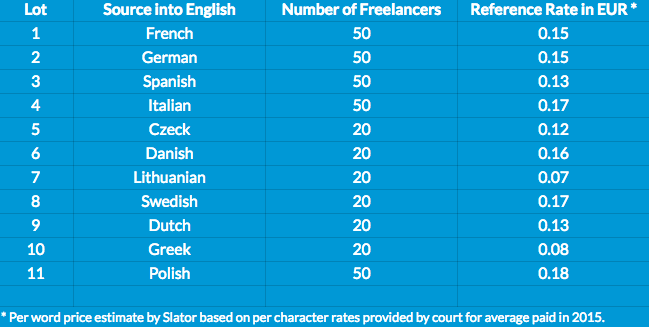 The Court’s payment terms would not get a private sector procurement manager in trouble. With a maximum of 60 days, freelancers will have to be patient to get their money.

There is also the risk that “Where that further assessment confirms that the quality is inadequate, the Court reserves the right to refuse payment in full or in part for that specific work assignment.”