In the United States, federal procurement―by extension, translation procurement―is relatively transparent. The US Government’s General Services Administration went as far as publishing the proposals and pricing tables of all federal contractors online. Europe is fairly open too with its TED portal, and, in Singapore, for example, translation jobs worth a mere few hundred dollars go to open tender.

Not so in Switzerland: Until recently, no information was available on what the federal government procures from third-party suppliers. In 2011, after a number of scandals involving hundreds of millions of dollars wasted on failed IT projects, a Swiss newspaper demanded the federal government release a detailed list of and total spend with external vendors.

The government fought the release but, after three years of legal battles, lost the case with the Swiss Supreme Court. The data was then published on Github; presumably to facilitate number crunching. It turns out the federal government spends around CHF 5bn (USD 5.13bn) annually on procuring external services. That is barely 10% of the federal government’s total budget and less than 1% of the country’s GDP.

As should have been expected for a country with four official languages, “Translation and Language Services” was among the 28 spend categories broken out. Switzerland’s federal government likely spends north of CHF 40m on internal translators and linguists, as Slator covered previously. The data posted on Github now reveals an additional CHF 17m going to outside vendors in 2014, the most recent year for which data was made available. 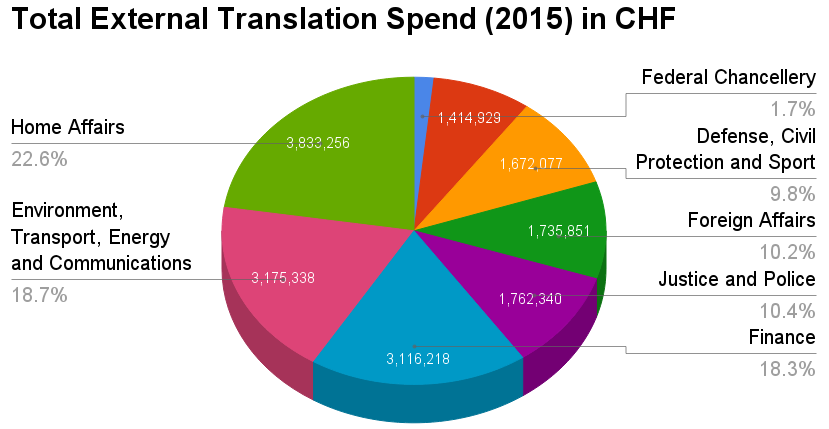 That number has risen strongly. In 2011, total spend was CHF 9.9m, increasing to CHF 14m in 2012 and CHF 15.8m in 2013. A significant portion of this is going to individual freelancers, whose word rates are among the highest in the world. CHF 0.40–0.50 are the norm. Sources within the federal government told Slator that individual freelancers tend to be preferred over language service providers (LSPs).

A strong indication that no single LSP receives a significant amount of work is the fact that LSPs are missing from the list of the largest contractors per the Github data. The exception is RR Donnelley-owned TMS platform MultiCorpora, the only company with a link to language services among all the 542 contractors. MultiCorpora is listed as a vendor of the Federal Chancellery.

According to sources, translation management is not centralized and the different ministries and departments use TMS systems like SDL as well.

Transparency should be the first step in streamlining the way the Swiss federal procures translation services. Centralizing translation procurement and management would yield substantial savings. With the data out and the public aware, now is as good a time as any for LSPs to talk to the powers that be at the Swiss federal government about rolling out a more modern approach to translation and saving taxpayers a few million francs.