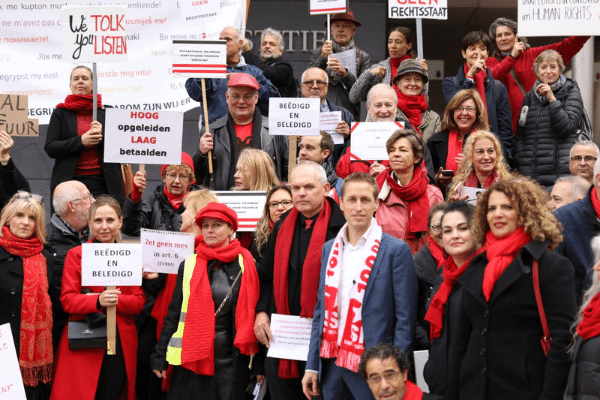 On October 26, 2021, the Dutch Parliament will vote on a motion that proposes better pay for translators and interpreters belonging to the Register of Sworn Interpreters and Translators (Rbtv). For most of October, Dutch linguists have been engaging in mass action under the auspices of a group Slator first wrote about a year ago.

It was back in October 2020 that plans to form a new professional body that would safeguard the interests of Dutch linguists first came to our attention. The group officially launched in December 2020 — although the beginnings of an organization started to come to light the year prior, culminating in the staging of a protest.

Covering how linguists in the Netherlands have ceased to work anew, the Dutch press has highlighted the group’s demand for better monetary compensation. But the group, now called the Order of Registered Interpreters and Translators (Orde van Registertolken en -vertalers or ORT&V), stated that it is actually fighting for two things: the right to negotiate fairer conditions for contracts and the right to work that has been otherwise given to “less qualified” interpreters.

Heleen Sittig, a member of the ORT&V Communications Team and a Spanish translator and interpreter, told Slator that the right to negotiate was given them by a June 2020 update to the Judicial Remuneration and Compensation Act, “although in practice this right is in most cases not granted.”

On the issue of less qualified interpreters being given work, Sittig pointed out that the Register of Sworn Interpreters and Translators (Rbtv) was set up a decade ago in the Netherlands to professionalize the language services sector. At the time, the Rbtv was open only to linguists with a C1 language proficiency level; but (lower) B2-level interpreters have since been allowed into the Rbtv.

Moreover, Sittig said, language service providers (LSPs) “have even formed their own teams — the so-called Noodlijst or Emergency List — of interpreters with totally unverifiable qualifications. These people do not have to pass any test, and the Government permits it. There are enough C1 linguists waiting at home for assignments, but apparently LSPs prefer to engage these other people, with lower or unknown qualifications.”

The ORT&V is of the belief that “the use of unqualified interpreters is not in accordance with the European Convention on Human Rights, Article 6, which grants the right to a fair trial,” Sittig said.

Asked if the ORT&V has, at all, demanded a higher minimum rate — which now stands at EUR 43.89 per hour for interpreters and EUR 0.079 per word for the translators — Sittig replied, “We are not really demanding a minimum rate. We want indexation.” Indexation refers to the adjustment of wages based on inflation, cost of living, etc.

Sittig noted how “rates have been frozen from 1963 (for translators) and 1981 (for interpreters). There is no other sector in the Netherlands where rates have never been indexed during all these years of inflation.”

She added, “We do keep an eye on our German neighbors. In Germany, the per-hour rate is EUR 85, working hours counted from the very moment you leave your home to go to the job, and the rate for translations in Germany is very reasonable as well. We also want to be able to negotiate fairer conditions.” (Germany’s Federal Association of Interpreters and Translators or BDÜ has, of course, criticized this hourly rate.)

And, yes, members of the ORT&V have stopped accepting work in general. Here is a timeline of events as narrated by Sittig.

Linguist Lidija Pomper, who specializes in English, Croatian, Bosnian, and Serbian, and who has been part of the ORT&V from the very start, told Slator, “It is quite a challenge to not accept work as we are all highly educated entrepreneurs who want to work and love to work. Unfortunately, my passion for languages and interpreting has been obstructed by worries about current developments. I am also disappointed and angry that the government is not listening.”

While the ORT&V is not staging a protest over compensation alone, the rates paid linguists by the Dutch government are indeed a sore point. Pomper noted how “compared to the other self-employed entrepreneurs in Holland, our hourly rate is similar to what taxi drivers, plumbers, and car mechanics earn — while we are experts and can be compared to psychiatrists who appear as experts in court as well.”

Compounding the issue is the government’s refusal to negotiate. Pomper said, “I am not prepared to sign additional contracts designed by individual agencies, each of them lowering our rates to the extreme, forcing us to accept lower rates for travel expenses, and not accepting negotiations about an additional 50% for work after 8 p.m. and on the weekend.”

As linguists in the Netherlands brace for the outcome of the October 26 Parliamentary vote, they have found some solace in banding together.

“I now live on my savings,” Pomper said. “I still study and try to be well informed, but I am slowly losing contact with daily developments. I am glad that I can contact my ORT&V colleagues who are going through the same thing.”

Update: With 77 voting against versus 73 for the motion to index wages, the Dutch Parliament on the afternoon of October 26, 2021 rejected the move to adjust linguist rates, which have remained the same for the last 58 years for translators and 40 years for interpreters. Slator will continue to monitor the situation and provide updates as needed.