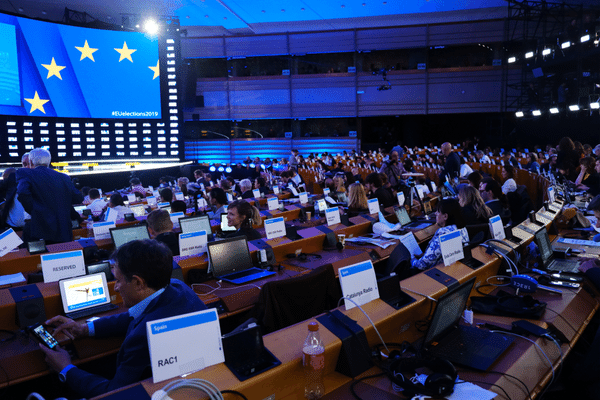 The European Parliament (EP) set into motion back in 2019 the search for a tool that would automatically transcribe and translate multilingual parliamentary debates in real time.

Leading the charge was the Directorate-General for Translation (DG TRAD), which ran the search in three stages as previously reported: (1) Three awarded contractors each developed a prototype, which the EP evaluated after 12 months; (2) The vendor with the best-performing tool integrated nine languages, and the contracts of the other two were terminated; (3) Integration of a further five languages for the succeeding two years.

The EP capped the maximum amount to be paid per stage at EUR 1m; divided among three vendors at stage 1 (i.e., EUR 0.33m each). The initial estimated total contract value of EUR 3m (USD 3.4m) would, therefore, be adjusted downward based on the total amount of stage 1 plus the proposed price of the winning vendor in stages 2 and 3.

All stage 1 candidates were evaluated based on five criteria (including price). The Cedat85-RWS-BertinIT consortium was, ultimately, awarded the contract worth an estimated total of EUR 1.39m.

The quality of linguistic output was of paramount importance for both automatic speech recognition and machine translation, according to Marcin Feder, Head of Speech-to-Text Unit, DG TRAD.

He told Slator, “Given the fact that some [criteria], namely latency and word-error rate (WER) were pass-or-fail type criteria — and all candidates passed — the decisive factor was linguistic quality; and that is where Cedat85 scored the highest overall.”

Feder added, “What is worth stressing is that the linguistic quality was evaluated by humans, expert language professionals at the EP, and that such evaluation is considered by us the gold standard.

Stage 1 was concluded at the end of October 2021. Stages 2 and 3 will each last a year, the tool being evaluated at the end of each cycle. “If everything goes according to schedule, the project is on course to be completed by autumn 2023,” Feder said.

The official name of the tool is LSTT or Live Speech to Text and Machine Translation Tool for 24 Languages. The EP will acquire the license after the project is completed and is willing to open-source the tool for use by other EU institutions, Feder said.

He pointed out, however, that “the EP is developing the LSTT tool only in addition to all other existing language services. It is not looking to develop a specific speech-to-speech solution.”

Feder further emphasized that all DG TRAD’s efforts are “human-centric and we look at technological solutions as an opportunity to support our language professionals […] and enhance their performance so that they can focus on tasks where human intervention is indispensable.”

Although still in the prototype stage, the tool has already been tested during live trials.

During the European Youth Event 2021 in October, LSTT was successfully deployed in seven online sessions. Feder said, “As this is a relatively early stage of the project, there is still a significant amount of work to be done, in terms of both IT integration and linguistic quality given that language models are subject to continuous improvement.”

According to Feder, “The main driving force for launching this project was to increase accessibility for the Deaf and the hard of hearing, who could not follow plenary debates in real time. Apart from the main target population, all other interested parties may benefit from following EP’s debates with the sound off.”

Furthermore, the EP “aims to close the perceived gap” between Parliament and its citizens, Feder said, adding that “the speech-to-text project is specifically aimed at improving accessibility and inclusiveness.”

Feder disclosed that DG TRAD is currently developing another service: off-line subtitling for the Deaf and the hard of hearing. “This year, for the first time, the winner of the LUX Audience Award, the Romanian documentary film ‘Collective’ by Alexander Nanau, was subtitled for the Deaf and hard of hearing in all 24 EU languages,” he said.

The DG TRAD Unit Head noted how uniquely positioned Parliament is in that it is powered by world-class language professionals, who work in all official EU languages, and can thus offer “high-quality human support” even as it develops its own cutting-edge NLP tools. Feder described this AI-powered, human-centric approach as “an integral part of a long-term vision developed for the [DG TRAD] by its Director-General, Valter Mavrič.”

“As the most multilingual parliament in the world, it is in our own interest to follow and influence technological developments, particularly from the human-centered perspective of the EP’s translation service,” Feder concluded.