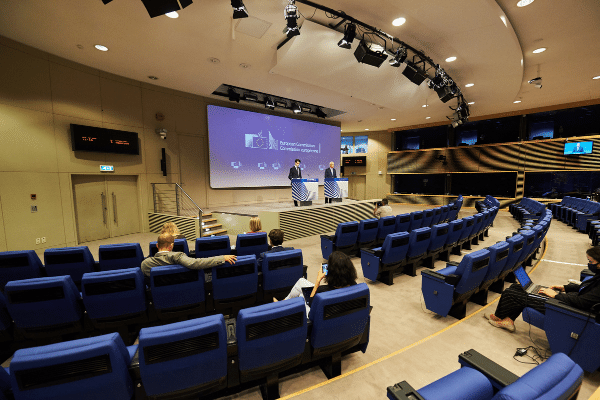 For more than four years, Fink-Hooijer led the DG Interpretation, also known by its former French initialization SCIC. As mentioned on the occasion of Fink-Hooijer’s appointment back in 2016, the SCIC is the world’s largest interpreting service with (at the time) 560 interpreters on staff, supported by an additional 3,000 freelance interpreters.

Contract interpreters working at all four institutions expressed their dismay back in June 2020 over the EU’s Covid-mitigating offer; and consequently gathered in front of Parliament to draw attention to their plight.

The task of heading the DG Interpretation now falls to Carlos Alegria, from whom Fink-Hooijer took the reins four years ago. Alegria’s appointment appears to be of an ad hoc nature as the EC has embarked on a search for a new head of post, as reported by UEPO.de.

36 pages. How and why LSPs get ISO certified. How to succeed in a LSP Quality Management.
$240 BUY NOW

The same report stated that the EC was specifically looking for a woman to be its new interpretation chief as the proportion of female general managers was at 38% as of October 2019 — which is below the 40% target set by former EC President Jean-Claude Juncker, who left the post in 2019.

The new President of the EC, Ursula von der Leyen, “has set her goals even higher: by 2024, half of all managers within the Commission administration should be women,” the report said.

According to UEPO.de, “Since Florika Fink-Hooijer is replacing a man in DG Environment, a renewed female occupation of the chief interpreter’s post would offer the opportunity to increase the proportion of women at this important management level. A total of 33 Directorates-General work for the Commission.”