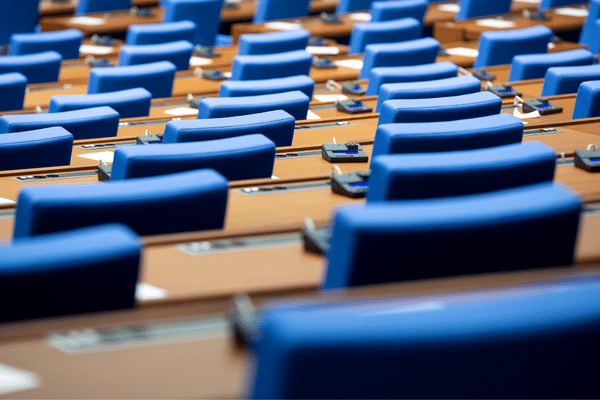 “The interpreters are on strike. They will not interpret remote interventions due to the potentially harmful effect of non-compliant sound on health and the lack of adapted working conditions.”

That was the message European Parliament (EP) interpreters were advised to read for at least two weeks this summer whenever a remote speaker took the floor. As reported in June 2022, the Joint General Assembly of EU interpreters voted unanimously to stop remote interpreting in Parliament with few exceptions.

That strike has ended. For now.

On October 17, 2022, interpreter unions called off the strike “with immediate effect,” according to US-based political newspaper, Politico.

The reprieve, which will last until the end of 2022, was part of an “interim agreement […] a good compromise between the needs of operational continuity in the European Parliament and interpreters’ health concerns related to the changes in the EP working methods,” Politico quoted an EP spokesperson as saying.

While interpreters will now fully serve hybrid meetings, the same report stated that Members of the European Parliament (MEPs) had been issued guidelines on maintaining image and sound quality — which, if the MEPs fail to follow, could stop interpreting services from proceeding.

According to Politico, interpreter unions wrote in their letter to EP President, Roberta Metsola, that the reprieve “does not change the fact that good sound quality and cooperative speaker behaviour are paramount […] should those preconditions fail to materialise, interpreters might be unable to interpret.”

Metsola, who assumed her post in January 2022, reportedly intervened after talks between parliamentary interpreters and the DG LINC (Directorate General for Logistics and Interpretation for Conferences at the EP) broke down.

MEPs had been joining meetings remotely (e.g., from daily commutes or restaurants), leading to poor sound quality and other issues, which have led interpreters to push back, not only in the EU but also at other institutions such as the United Nations. Among the complaints: tinnitus, hyperacusis, ear pain, vertigo, and dizziness.

As the head of DG LINC’s counterpart at the European Commission, DG SCIC’s Genoveva Ruiz Calavera, has pointed out, the interpreting profession is still adjusting to the hybrid culture — and there are many opportunities and challenges left to address.

Interpreter unions are looking forward to further talks with EP officials on post-pandemic working conditions, slated for November 2022. We will monitor the situation.