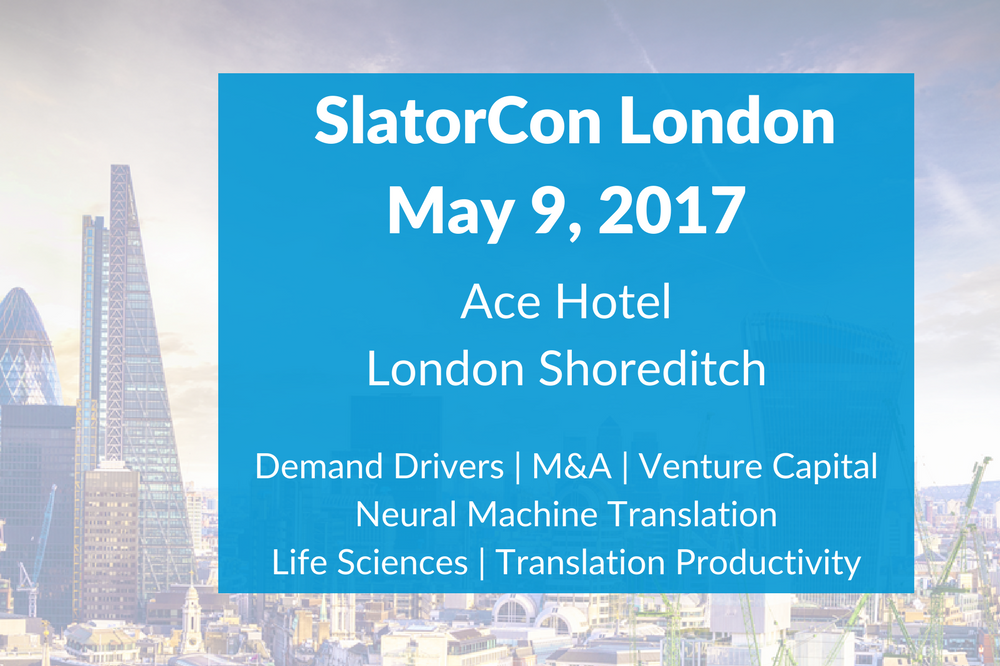 Slator is coming to London. We are proud to host the very first SlatorCon at the Ace Hotel London in the heart of the British capital.

SlatorCon explores some of the key drivers of the language services and technology industry such as mergers and acquisitions, venture capital, neural machine translation, life sciences, and accelerating translation productivity. We are excited to welcome some of the foremost experts in these areas, who will share their views on how these drivers are shaping the industry.

SlatorCon features six 20-minute presentations followed by an expert panel moderated by Slator co-founder Florian Faes. After the event, participants can connect with their peers during a networking reception.

Simon is a Managing Director and Partner at William Blair focusing on M&A transactions in the Technology and Services Industries. Prior to joining William Blair in 2013, Simon worked in Dresdner Kleinwort’s European M&A Advisory team across sectors. Within his sector focus, the translation industry is a key focus – Simon advised on the sale of CLS Communication to Lionbridge and the sale of WIENERS+WIENERS to ECM Equity Capital Management. Simon studied Business Administration at the Frankfurt School of Finance & Management in Germany and at San Diego State University in the US.

Marcus Polke is an Investment Director at Acton Capital Partners, a growth and later stage venture capital firm. Acton invests in technology-enabled businesses across Europe and North America. As with the translation industry, Marcus is attracted by industries on the cusp of fundamental, digital change: he started his career in the mid 90s at Axel Springer when the internet forced publishers to rethink their businesses fundamentally. After joining Amazon Germany early on, he helped shaping what became a complete rewrite of the bookselling business and online retail. He led Abebooks Europe, the largest global marketplace for antiquarian books, which was sold to Amazon in 2008. Since then, Marcus is investing as a VC at Acton Capital Partners. Among his investments numbers Tolingo, a leading German LSP.

John’s background is in Machine Translation, an area in which he received a PhD from Dublin City University. Since then, he has focused on consulting and development of MT technology that has real practical applications and provides true value to its users. The foundations of Iconic Translation Machines are built on methods that John pioneered over almost a decade of research. His ongoing development and innovation in this area ensures that Iconic Translation Machines will continue to deliver cutting-edge translation technology.

Steve Kirk is currently the CPO at QuintilesIMS a company formed from the recent merger of Quintiles and IMS Health. He has responsibility for all Indirect and R&D Clinical spend and his team is located across US, EMEA and APAC regions. He is tasked with delivering the company’s Synergy targets resulting from the Merger. Steve has over 20 years Procurement experience gained in multiple industries covering Direct & Indirect categories, Project Management, Consulting and Leadership roles. Before joining QuintilesIMS in 2011, he worked at Novartis with Global Cross Divisional responsibility for Construction and Equipment. Prior to that role he was Head of Procurement for the UK Procurement team in the Vaccines division. He spent 3 years at IBM as a Procurement Consultant working on projects for large organisations such as Vodafone, Colgate Palmolive and National Grid. After leaving Loughborough University he worked in the Automotive sector for Peugeot and Jaguar Land Rover (JLR). At JLR he gained 6 sigma Black Belt accreditation and also led cross company Global sourcing projects within the Ford Motor Co. group.

Spence Green currently works on machine-assisted language translation at Lilt. He graduated from Stanford with a PhD in computer science in 2014. His research area was the intersection of natural language processing and human-computer interaction. He has published papers on statistical machine translation, statistical language parsing, and mixed-initiative systems; and enjoys studying Arabic. Before graduate school Spence was an engineer at Northrop Grumman Corp.

Based in Zurich, Florian Faes spent over eight years working in Asia, stationed in Singapore, Hong Kong and Shanghai. Before launching Slator in 2015, he was with CLS Communication as Head of Asia and he was part of group management during the trade sale to Lionbridge. Slator is the most up-to-date source of industry news covering language services and technology. Headquartered in Zurich, Slator runs an editorial desk in Manila and has a presence in Singapore.