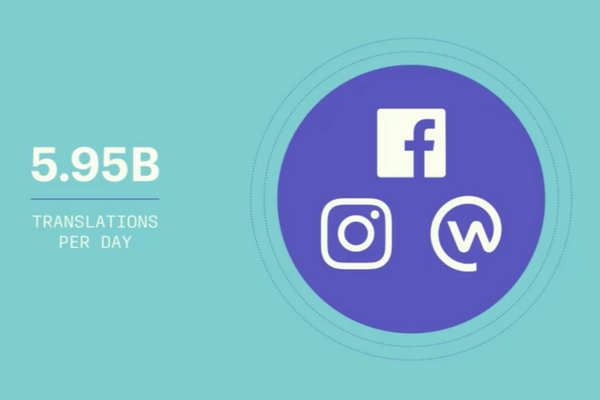 Facebook is open sourcing a tool chain of machine learning (ML) and artificial intelligence (AI) tools that it uses to power many of its own products, including Translate, its open source project based on the company’s machine translation systems.

On the second day of F8, Facebook’s annual development conference being held this week in San Jose, California, Chief Technology Officer Mike Schroepfer took the stage to explain the evolution of its AI tool chain and why it is crucial to share it with developers.

Pino explained that two years ago, Facebook experimented on ideas with PyTorch, and manually re-implemented any successful tests into Caffe2 for production. However, according to him, this process took a lot of time and did not scale.

So they developed ONNX, “an industry-wide effort led by Facebook, Amazon, and Microsoft,” Pino said.

“In our particular use-case,” he explained, “we leverage ONNX to essentially export a model from one framework to the other.” Pino said ONNX improved model deployment by becoming a middleman that made the process automatic instead of manual, speeding up re-implementation of PyTorch ideas into Caffe2 production environments.

This same tool chain that Facebook will be open-sourcing—PyTorch, ONNX, and Caffe2—is currently in use across the company’s products, such as Facebook and Messenger, Instagram, and Workplace.

A post in Facebook’s developer’s blog reveals that PyTorch 1.0 will be available in beta within the next few months, and “will include a family of tools, libraries, pre-trained models, and datasets for each stage of development, enabling the community to quickly create and deploy new AI innovations at scale.”

During the NMT keynote presentation, before Pino explained the relevance of the PyTorch 1.0 package, Ayan opened by updating the audience with Facebook’s multilingual challenges and previous tools they developed to provide incremental solutions to these problems. This included Graph Search in multiple languages, multilingual composer, and one of their most recent deployments: M Suggestions on Facebook Messenger, which automatically translates messages.

Ayan touched upon why NMT and natural language processing (NLP) were a paired effort at Facebook. He explains that their AI work not only needs to be capable of translating from multiple languages, but also understanding context, so it can perform anything from trivial functions like multilingual event suggestions to more serious ones like flagging posts for suicide prevention.

Pino then talked about NMT specifically. Compared to 2017’s F8 conference when Facebook was only running 50% of its translations through NMT and doing two billion translations a day, Pino provided an update: now they are 100% neural and they handle 5.95bn translations a day. He also also discussed Facebook’s NMT model and shared the two major hurdles when it comes to deployment: low-resource languages and scale.

Finally, after Ayan and Pino, Stoyanov took to the stage to discuss Facebook’s work on multilingual understanding, or what he called “how we build natural language processing applications in a multilingual world.”

Stoyanov briefly explained their multilingual understanding projects, including research on word embeddings that then allows their NMT engines to undergo unsupervised learning, or training with only monolingual data.

“Now, amazingly, this whole process works,” Stoyanov said. “We can learn the correspondence between words without having any supervision; without even knowing a single word that’s in common between the two languages.”

Stoyanov also touched upon expanding their research from word embeddings to sentence embeddings, to capture universal similarities across languages in the way they structure sentences and use that learning for unsupervised training of NLP and MT models.

Facebook’s research on Multilingual Unsupervised and Supervised Embeddings (MUSE) is likewise being open-sourced. Stoyanov added: “we are also open sourcing our datasets for multilingual understanding.”

Training data limitations are a major hurdle for so-called low-resource languages, language pairs with very little parallel corpora between them. This makes it difficult to build fluent NMT systems for such pairs since neural network engines typically require a large amount of parallel corpora to be effective.

Facebook CTO Schroepfer said their early work in MUSE among many areas of research is “promising work to bring all the tools and technologies they have to 6,000 languages all around the world.”

Since last year, the social media giant has been besieged by a mountain of problems concerning data privacy, hate speech, bullying, propaganda, and fake news on the platform, which led to CEO Mark Zuckerberg’s testimony at Capitol Hill before the US Senate.

Facebook executives at F8 explained the importance of NLP in its work on keeping the social network clean and to automate many processes at scale.