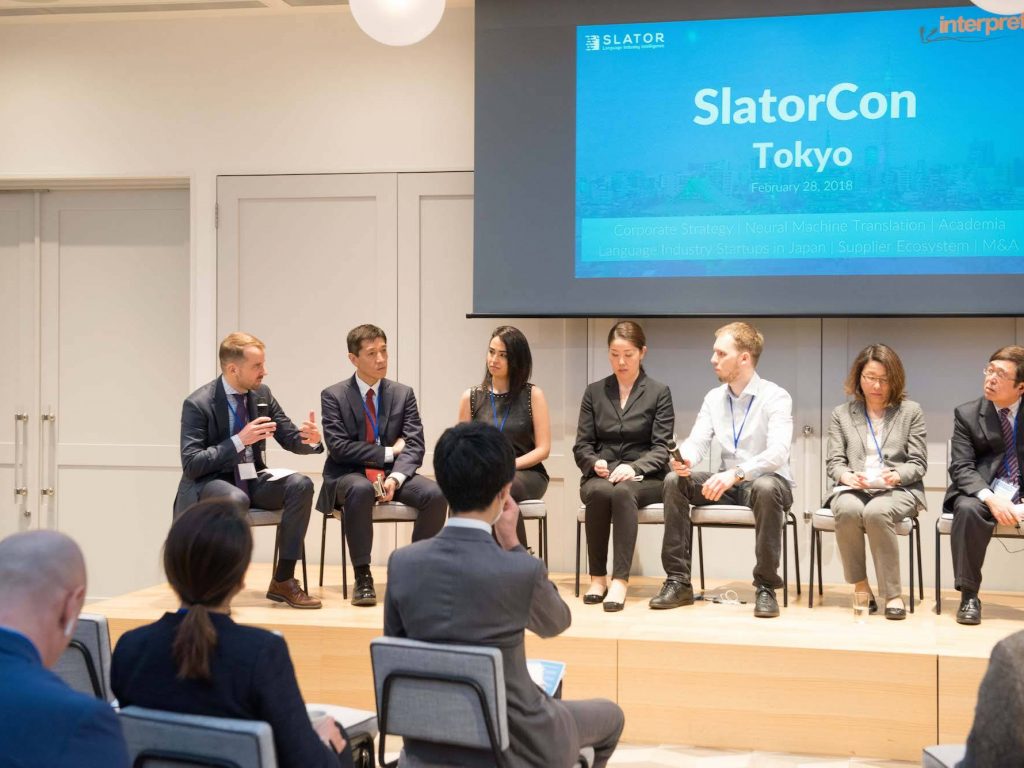 On February 28, Slator was delighted to host Japan’s language industry elite at the gorgeous Trunk Hotel in hip Shibuya for the inaugural SlatorCon Tokyo. Over 40 leading language industry professionals from Japan, Asia, and Europe gathered for an afternoon packed with industry insights and an evening of active networking.

The author kicked off the conference with a presentation that touched on three major points: First, new demand in the language industry flows from verticals such as media localization, life sciences, and global marketing as well as in voice and remote interpretation. Second, the race for market leadership in the language industry has been thrown wide open with TransPerfect passing Lionbridge to take the crown in 2017 and RWS catching up fast. Third, neural machine translation is becoming integrated into the language industry supply chain and is making its presence felt. Language service providers (LSPs) need to act now and adapt both processes and pricing.

Eiji Sano, Director of SAP’s Language Services unit in Japan, then discussed his company’s approach to sourcing. SAP works with a very large network of over 100 LSPs and shares information with its vast language services supplier ecosystem through a Central Information System.

Oya Koc, Founder and CEO of Tokyo-based remote interpretation app Oyraa, followed and provided participants with an overview of the language industry startup scene in Japan. The remarkable data point Koc shared with participants right at the start of her presentation was that only 1% of Japanese startups are active in an area related to language services and technology, while fintech (9%), IoT/AR/VR/Robot (21%), and other areas command a much bigger share of the startup pie.

That said, Koc is optimistic about the market overall and is positive that language startups are going to become more prominent going forward.

After an extensive networking break, Ikuo Higashi, President of Japan’s largest language service provider Honyaku Center Inc., discussed his company’s performance in this fast-changing market. Higashi-san said Honyaku Center closed 2017 with JPY 10.2bn in sales (USD 96.5m) and he projects revenues for 2018 to reach JPY 10.6bn (USD 100.4m). While this is already a large footprint, Higashi-san commented that there is ample room to grow in Japan, as he pegs the total market size at JPY 290bn (USD 2.7bn).

Kayoko Takeda, Professor of Translation and Interpreting Studies at Rikkyo University and former head of the Japanese translation and interpreting program at the Middlebury Institute of International Studies at Monterey, discussed how Rikkyo prepares the next generation of linguists for a competitive market.

Rikkyo University has been offering Research-oriented TI studies at the Graduate School of Intercultural Communication since 2002. In 2016, the university added professional training programs with a Certificate in Conference Interpreting and Certificate in Professional Translation. Takeda-san concluded by calling on all stakeholders in the language industry to adopt a more “holistic approach” to linguist training.

Then it was up to Chizu Tanaka, Team Leader of Booking.com’s Translations & Content Agency in Japan, to give participants an introduction to how her fast-growing company manages multilingual content. Tanaka-san outlined a process that is centered around data and managed by an experienced team. They handle millions of words daily and deploy extensive A/B testing of different translations.

The author then called all speakers on stage for a panel discussion. The panel included Andrey Schukin, CTO of Interprefy, whose remote interpretation app worked flawlessly and enabled a fluent discussion in both Japanese and English.

The discussion touched on a variety of subjects, ranging from tech-driven market disruption to how large buyers interact with the vendor-side. Watch this space for extended coverage of the presentations and the panel discussion.

Andrew Smart, Slator Co-founder and Commercial Director, closed the event by thanking participants and inviting them to join other SlatorCons this year: London on May 17, San Francisco in September 2018, and Zurich in December 2018.