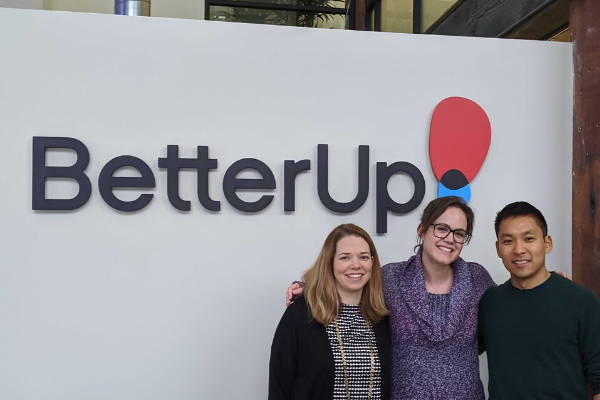 BetterUp is a mobile-based coaching platform headquartered in San Francisco. Their mission: to help professionals everywhere pursue lives with greater clarity, purpose, and passion. Localization is crucial to achieving this goal.

“For us, localization is both an enabler and a differentiator,” said Ella Pętlicka, Localization Program Manager at BetterUp. “It allows us to offer full support to our international members. It also gives us a strong competitive advantage as we are the only company that offers one-to-one, personalized coaching at scale in 30 languages across 62 countries. And we are not planning to stop there!”

CEO Alexi Robichaux founded the company in 2013. BetterUp is a VC-funded, late-stage startup that serves more than 100 enterprise customers, including 32 of the Fortune 1000. Total funding to date is USD 142m, with its latest funding round on Jun 12, 2019 having raised USD 103m.

Among its most recent investors are two Bay Area-based VC funds: Crosslink Capital, which has over USD 2bn in assets and has invested in the likes of Ancestry.com and Coupa; and Threshold (BentoBox, Doximity).

Pętlicka told Slator that building out their localization team remains a key priority for the company as it continues to grow. Among BetterUp’s 230 full-time employees is a dedicated team responsible for localization, which includes product localization and the management of an international content library.

Language selection was initially driven by market research; after which, Pętlicka said, “we started validating our findings with customers, who helped us enormously to prioritize.” She added, “The six new languages that we now support, on top of English, cover our clients’ major international locations as well as major coach hubs.”

“We take the time and effort to include localization from the moment we start ideating on new features and content, rather than waiting until the very end of our production process” — Ella Pętlicka, Localization Program Manager, BetterUp

The BetterUp localization team has, as Pętlicka described it, “quite a few workflows” because they work with so many types of source content, such as product, articles, videos, and podcasts. And they are still developing new workflows for more interactive content.

“Our localization process starts, actually, upon content creation. Our copywriters and subject matter experts know how to create content that is global-ready and optimized for localization. We take the time and effort to include localization from the moment we start ideating on new features and content, rather than waiting until the very end of our production process,” Pętlicka said.

As for translation, it is performed by a team of linguists with the appropriate background. “But having the right linguists is not everything,” Pętlicka noted. “My role as a localization manager is to support the translation team and give them the context and training they need to do a good job.”

Among Pętlicka’s responsibilities as Localization Program Manager, she singles out managing BetterUp’s international content library as being particularly critical. She explained: “Our libraries consist of learning resources that facilitate our members’ growth and help them achieve their development goals. Our coaches, at the end of each session, assign small chunks of content of different modalities to the members (e.g., articles, videos, activities, podcasts), which they can then digest in between their coaching sessions.”

It falls to Pętlicka to ensure that each coaching experience is recreated for BetterUp’s international audiences. She said, “Given the size of our library, one of the most critical tasks under my umbrella is to prioritize which content gets translated first, and which can wait until later.”

“Anyone who has ever worked on localizing psychological assessments will know that it’s often not a 1:1 equivalence. Assessments often need to be tweaked to facilitate the same answers in the target language and culture as in the source”

The Localization Program Manager is also responsible for another important task: safeguarding the quality of the company’s assessments. BetterUp creates evidence-based assessments around their proprietary Whole Person Approach to personal and professional development.

According to Pętlicka, “Anyone who has ever worked on localizing psychological assessments will know that it’s often not a 1:1 equivalence. Assessments often need to be tweaked to facilitate the same answers in the target language and culture as in the source.”

To this end, their localized assessment follows a very specific process, called “trans-adaptation.” Developed by the International Test Commission, an organization of national psychological associations that advocate effective testing, trans-adaptation aims to do what transcreation does for marketing — “but on a deeper and more complex level,” Pętlicka explained, adding that the localization team works closely with subject matter experts within psychology from each target region.

“Straightforward translation, even if it’s entirely correct, is insufficient here because it’s too restrictive”

When Distorting the Original Meaning Is Necessary

Pętlicka said the goal of trans-adaptation is to “facilitate comparisons across different groups of respondents; in our case, comparison between respondents from different countries, completing one of our assessments in different languages.”

She said that straightforward translation, even if 100% accurate, is insufficient simply because it is too restrictive. According to Pętlicka, “Linguists do not have the liberty to distort the original meaning of the source assessment, and that’s what we need to do in some cases.”

This is the reason BetterUp works with SMEs from each target region: “They are either researchers or practitioners within the field of Psychology, with years of professional or academic experience under their belts. They help us understand how each assessment item is going to be perceived by our target audience and, if needed, tweak the translation to trigger the same kind of responses,” she explained.

Pętlicka cited a specific instance showing how crucial it is to get trans-adaptation right: “In our English assessment, we use the word ‘co-worker,’ which, depending on the situation, could mean peer but also a subordinate or a supervisor. In the United States, where the structure is more flat, certain actions, like sharing feedback on someone’s performance, are acceptable in any direction — upward, downward, and sideways. But in a more formal culture, like in China, providing upward feedback would be considered unacceptable; or, at the very least, disruptive. So when we trans-adapted certain items into Chinese, we needed to make sure they would not be interpreted as having an upward direction.”

“If that had been the case,” she pointed out, “they would have triggered completely different answers than our American respondents, and, most likely, cause some serious turmoil.”

Alongside the trans-adaptation of assessments and localizing multifaceted content, BetterUp also works on constantly improving their in-house-developed app, “sending strings on a daily basis,” according to Pętlicka. She added, “Localization needs to keep up with that pace and once our app was launched, we moved into a more continuous model of localization.”

So what’s next on the horizon for BetterUp’s Localization Program Manager? Pętlicka said, “In 2020, our plan is to continue to invest in localization and add more languages and additional local content to meet the needs of our global customers — and make sure we are able to coach as many members as possible around the world.”