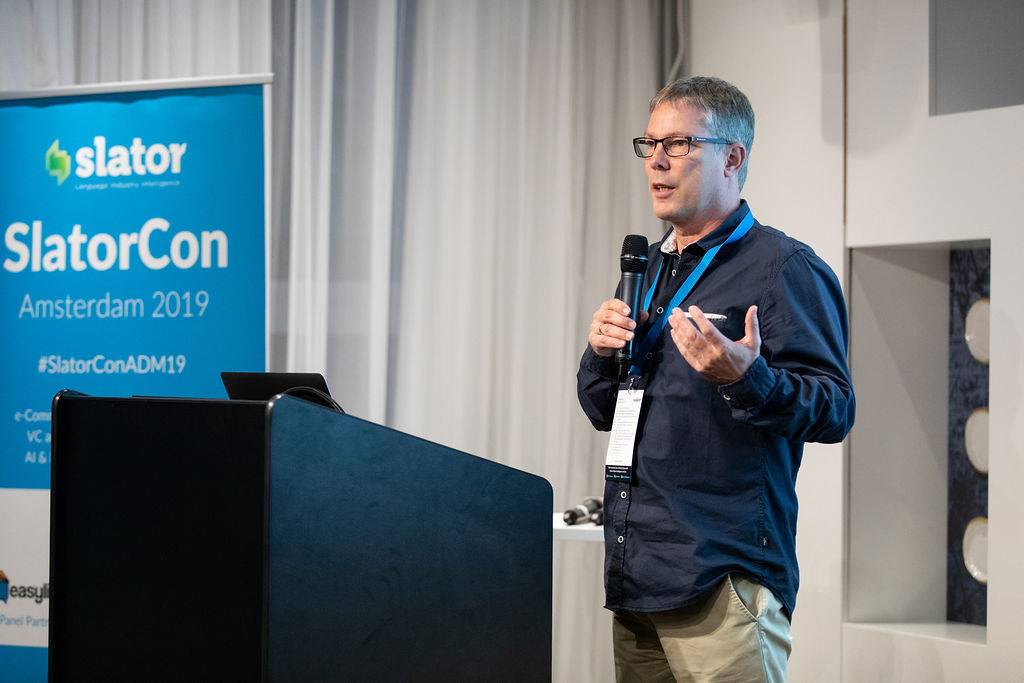 At LogMeIn, a publicly listed SaaS provider (NASDAQ: LOGM) based in Boston, localization is currently evolving from a translation service into a globalization consultancy. The end goal of this journey, to fuel international growth. So did Hartmut von Berg, LogMeIn’s Head of Localization, tell the SlatorCon Amsterdam 2019 audience.

LogMeIn, valued at nearly USD 4bn in market cap, is a company that in 2017 completed a merger with competitor GetGo. GetGo was, in turn, the result of a spin-off the year prior by Citrix Systems of its GoTo product line (e.g., GoToMeeting, etc.). Having been with the Citrix organization since 2012 in product engineering leadership roles, von Berg brought a different perspective to the role of localization at the company.

Seeing the potential of the combined organization’s two small localization teams (which had a lot of overlap in terms of process and function), he decided that they were not going to simply “follow the standard path” and consolidate tools, processes, vendors, and leadership, and then stop there.

Von Berg said he wanted to “revolutionize the way localization operates at LogMeIn, repositioning the function according to the value it could bring to the table.” In short, some reengineering was in order.

From Provider to Influencer

Even as the localization teams kept production up and consolidated workflows and tools wherever possible, according to von Berg, they first had to find a stable place for their function within the consolidated organization. It had to be a department where localization could fuel growth in line with the LogMeIn ethos, which von Berg described as “operating with international markets in mind.”

According to von Berg, “We thought, to fuel International growth, localization needs to be transformed away from providing translation services towards influencing business decisions about investments into international markets.”

So von Berg’s team considered where decisions for international markets are made within the company: The International Department headquartered in Dublin.

Fortunately, he said, the leader of the International Department did not take much convincing about the value that a matured localization function could add to his business.

“That was good because, in the past, we had been working with many American-focused leaders being an American-based company,” von Berg said. “It’s always hard to convince them to think global if the American market is still big enough to drive their business.”

So how did they demonstrate the value that localization could immediately add to the business? Sometime ago, the company had created a framework to assess market readiness for specific products. Von Berg thought they could build on that and create a Localization Readiness Framework across product lines. “Because we were doing our homework, we could demonstrate that we had formed a highly motivated team willing to bring localization to the next level,” he said.

To fuel International growth, localization needs to be transformed away from providing translation services towards influencing business decisions about investments into international markets — Hartmut von Berg, Head of Localization, LogMeIn

At that point, von Berg said, they still had two teams with two different leaders having only partial focus on localization: “One was the tech writing leader and his localization team. The other was me, an engineering leader with a localization function. So we thought about finding an experienced leader. Being a passionate organization developer myself, it was an easy decision for me to apply for that role.”

Von Berg then dropped all his engineering responsibilities to fully dedicate himself to transforming the company’s translation service into a globalization consultancy. “In mid-2018, we officially unified the two localization teams and moved them under the umbrella of LogMeIn’s international organization,” von Berg recalled.

As a next step toward localization maturity, von Berg said they decided to implement “highly automated, end-to-end localization processes in partnership with key internal stakeholders.”

This entailed assessing existing workflows with the company’s internal customers, von Berg said, and then “onboarding them and defining a new sustainable process that starts at content creation and goes down to our language service providers, including the entire localization chain.”

In 2019, the company posted a 156% year-over-year growth in localization demand. Hence, their workload increased by 156% even as headcount stayed flat. “Good thing we had started to automate processes early on,” von Berg said.

Von Berg singled out SEO localization and machine translation as current focus areas. About SEO localization, he said, “We looked into the industry and we couldn’t identify a really good solution. So we are starting to build our own,” he said.

Von Berg said they also aim to leverage machine translation to improve scalability and serve unaided markets. He said, “Quality is usually assessed at the very end, which doesn’t really scale if you have to assess quality in 10 or 20 languages for each and every feature release.”

The solution, therefore, is to improve quality during the earlier stages (a.k.a. “left shifting quality”), von Berg said. He added that implementing robust terminology management allows them to improve quality right at content creation and, ultimately, “deliver a global customer experience with consistent terminology.”

As a parting shot, LogMeIn’s Head of Localization told the SlatorCon audience, “We are still traveling, but we have a very aspirational goal to be an in-house globalization consultancy, not just a translation service provider. If you would like to discuss our approach or an idea that can help us progress, feel free.”