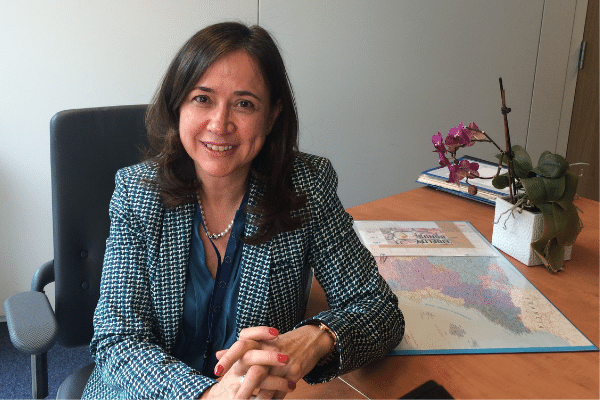 Genoveva “Veva” Ruiz Calavera became the Director General of the DG SCIC on April 1, 2021. The search for the new head of the Directorate General for Interpretation at the European Commission (a.k.a DG SCIC, its French initialization) officially began in September 2020 after former chief Florika Fink-Hooijer stepped down.

In the months prior, contract interpreters (ACIs) working at all four EU institutions had expressed their disappointment over the EU’s Covid-mitigating offer. In June, they gathered in front of Parliament to draw attention to their cause, currently being championed by trade union AIIC and other groups.

Ruiz Calavera told Slator, “I am aware that 2020 was a particularly difficult year for ACIs working for the European institutions. ACIs are an essential partner for DG SCIC and I intend to meet with AIIC representatives as soon as possible to listen to their concerns and to discuss issues. As the conditions for conferences and meetings stabilize and the demand for interpretation increases, we should be able to offer more recruitment possibilities to ACIs.”

On hiring new staff at the DG SCIC in general, she said that while the number of posts is not expected to increase, they plan to replace retiring staff.

Prior to the SCIC, Ruiz Calavera was Director for Western Balkans at DG NEAR, where she managed bilateral relations between the EU and Albania, Bosnia and Herzegovina, Kosovo, Montenegro, North Macedonia, and Serbia.

Asked about other immediate priorities, she replied, “Although I have been a keen customer of DG SCIC’s services for many years, I will need to familiarize myself with the functioning of the DG and the services it provides. Besides interpretation, DG SCIC is also in charge of conference organization and meeting room management for the whole of the Commission; also including, for example, audio-visual and web streaming solutions.”

On her plate as well: new software and hardware to support remote or distanced working. Their tools and equipment, which helped ensure business continuity over the past year, need to be further improved, Ruiz Calavera said, adding “DG SCIC regularly consults its interpreters, as well as its sound engineers and technicians, to identify and adopt necessary updates and improvements.”

“It is becoming increasingly likely that many conferences and meetings in the post-pandemic world will be of a hybrid nature, which might require an increased use of RSI”

The DG SCIC also participates in the work of the International Organization for Standardization (ISO) and is “very active” in raising awareness for remote simultaneous interpretation (RSI) technology among participants and conference organizers at the European Commission (EC).

The new chief interpreter of the EC foresees a post-Covid world of many hybrid conferences (i.e., in-person meetings combined with remote) and said they are “open to testing all possible options.”

However, which solutions the DG SCIC adopts will depend on how these square with the needs of customers, their business model, and their “mandate to offer high quality multilingual interpretation,” Ruiz Calavera said.

In-Person Moratorium and Other Safety Steps

On another matter crucial to work at the EC, Covid-related safety measures, Ruiz Calavera said, “The Commission as a whole has restricted all travel to essential missions and decided on a general rule of telework (for the vast majority of staff) and a moratorium of in-person (physical) conferences until further notice.”

She also highlighted the specific steps, summarized as follows, noting how “since these measures were put in place, no interpreter was infected in the workplace.”

The EC specifically searched for a woman to be its new chief interpreter, as previously mentioned, given the bar set by current EC President, Ursula von der Leyen; that is, half of all managers at the EC by 2024 should be women.

According to Ruiz Calavera, “Women in management grew from 30% in 2014 to 41% in 2019, thus exceeding the target of 40% female representation,” as set by former EC President Jean-Claude Juncker. She added that, over the same period, the percentage of women in senior management increased from 27% to 37% and, at middle management, from 31% to 42%.

“As to the future ambitions of the Commission, the target for female middle managers is 50% by the end of 2024 and we are well advancing towards that goal. The Commission’s current female representation rate in middle management is 44.1%; and, while all DGs work towards the 50% goal, DG SCIC is and has always been a stronghold in that sense, as currently 61% of our middle managers are female,” Ruiz Calavera said.

We also asked the new Director General of the SCIC for her message to the many interpreters — most notably the ACIs — whose livelihood was affected by the pandemic. She noted how, in the face of 2020’s enormous challenges, “all DG SCIC staff (interpreters, conference and meeting managers, technicians, operators, etc.) demonstrated remarkable adaptability and resilience.”

Ruiz Calavera further stated, “ACIs are essential to the smooth functioning of SCIC. As we come out of the crisis, I wish to work with them to define the future of the service and multilingualism in the EU. These are still uncertain times but I am confident that we will cooperate to the fullest in order to find common answers.”