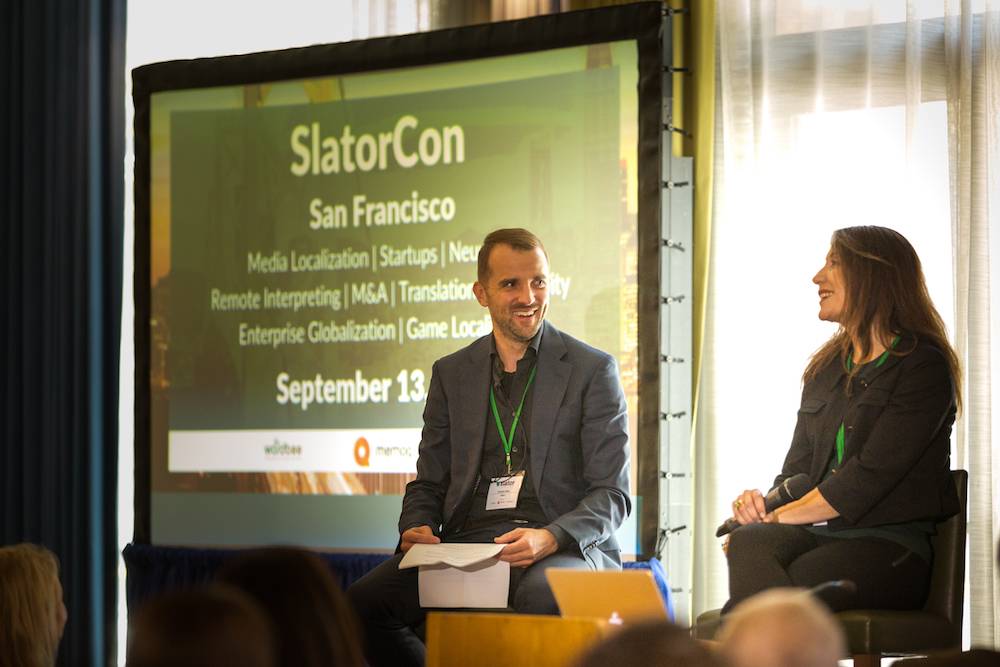 Neural machine translation (NMT) is one of the biggest—if not the biggest—ongoing development areas in language technology today. Yet despite how good NMT has become, there are simply some use cases where it is insufficient.

Marketing and gaming were just two of those verticals, if the discussions on the SlatorCon San Francisco 2018 Technology Panel were any indication. Mark Shriner, Director North America of Wordbee, Sonia Oliveira, Senior Director – Globalization at GoPro, and Mike Kim, Localization Director at Tencent America talked about technology at the sold-out event.

Asked about the languages and content types handled by their organization, Oliveira said for the most part, they needed to amplify their marketing messaging and branding for their product ecosystem. “Our content does not lend itself well to machine translation,” Oliveira said, though she conceded that there are potential application areas.

“If you’ve seen any of our videos, we’re all about adventure; we’re a sexy brand and we want to push the envelope and our marketing reflects that,” she said. “Machines don’t do too well on that front.”

Slator Co-Founder Florian Faes, hosting the panel, probed further on NMT use. Oliveira admitted that whereas “15 to 20 years ago, machine translation was laughable,” today, she thinks that “we’re gonna get even better than we have gotten up to now.”

Her big issue, however, was “misuse of technology.” “We have to be realistic,” she said. “I think it is misuse of technology to try and deploy [MT] for something it was not designed for and where we already know it’s not gonna work.” “Our marketing is very transcreation focused,” she added.

For Tencent’s Kim, it was not even a matter of replacing or augmenting human translation work with MT. “For marketing content, copywriters don’t even speak the source language, they just look at what’s been translated, receive the context, and rewrite,” he said. “Copywriters will write new style guides, new characteristics for heroes, so it’s like creating a new world apart from what was originally created. That’s really hard to do with MT.”

Similarities and Differences in Technology Demands

Another area of discussion in the panel was how specific clients share similar technology demands and how certain verticals, no matter how seemingly similar, tend to face unique challenges.

As the only vendor in the panel, Wordbee’s Shriner shed some light on client demand in terms of technology: “there are a million different features and everybody wants a subset of them”

“They want an integrated platform,” Shriner said. “And they want that platform to be easily integrated into some form of CMS or document management system.” He explained that integrating all these points and platforms enables clients to unlock “the power of automation,” creating process-overlapping efficiencies and generating competitive advantages.

Aside from integration, clients also look for agile development, according to Shriner, “because all organizations have their own proprietary platforms and processes and if I come to you with a big bundle of software and say take it or leave it, it’s not gonna fit all your needs.”

Asked about MT integration, Shriner shared that they have already partnered with 15 different MT companies and are open to client requests.

As for the unique challenges faced by different verticals, Oliveira said video localization has fundamental problems that are not necessarily resolved by current developments in language technology. “Let’s talk about a very basic one,” she started. “Video files are huge. It’s very difficult to send them for quality check to an outside partner, for example.”

In Kim’s experience, since game companies localize for geographies based on spending power and not languages spoken, sometimes they find themselves in low-resource language situations. “In some of the companies where I worked, we would even target Burmese or some very random languages that you’d never think that someone will play the game, because someone will spend a lot of dollars as a single person,” he said.

Shriner mentioned that some companies are making good progress with the unique challenges that they face. “I see a lot of innovation amongst the software and ecommerce companies like Expedia,” he said. “They just developed their own proprietary processes for localizing UGC on the fly.”

Trends for the Future

Throughout the panel and the ensuing Q&A with the audience, the panelists talked about how the current trends in language technology will continue into the foreseeable future.

In terms of collaboration and openness in tech research and development, Shriner said he’s seeing “much improvement towards openness,” citing companies like Microsoft starting to collaborate with others. “If Microsoft is looking at it and they see the benefits of collaboration, I think people in our industry will do so as well.”

“I think it’s both, because there will be companies that are not going to be using open source,” she said. “Sometimes open source develops in a way that proprietary tools will then copy and make better for everybody.”

As for NMT, all of the panelists expected the technology to develop even further, but it remains to be seen whether it will have an impact on more transcreation-focused verticals.

Join the discussion and register now to for SlatorCon Zurich on November 29th. Presenters are from Google, Roche, Ubiqus, Raymond James, and more.