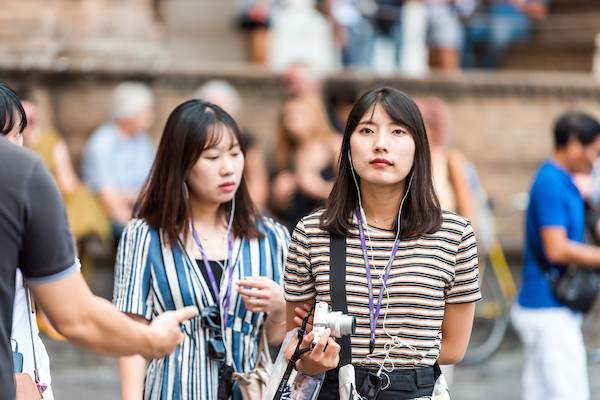 Half the Slator readers surveyed back in February said standalone translation devices (i.e., earpieces) are unlikely to gain traction, while a third found them useless. Whatever the professional opinion out of the language industry may be, consumer demand for translation gadgets is real and, apparently, on the rise.

Slator has done a rundown of “translation devices” for a couple of years now and the brass ring has always been providing output in “real-time.” Apart from the attached marketing hype (e.g., breaking down language, or cultural, barriers; and, lately, “fully-AI”), how do these gadgets fare where it matters: sales?

A new gizmo currently gaining support on Kickstarter seems to have taken into account the limits of “fully-AI” and has incorporated a “live interpreter service” for an additional fee after the first (free) 10 minutes.

Called the ONE Mini, it has drawn an auspicious number of backers on Kickstarter (888 as of this writing) and has, thus far, surpassed its sales goal by over 50% with 21 days to go. It sells for USD 49 and users will be charged a top-up of about USD 2 per minute via the ONE Mini phone app. So not a standalone, but supported by both your phone and a 24/7 human interpreter.

Device creator Transnone admits “AI is not always omnipotent” and “communication is complex in terms of culture and context,” therefore, combining human and machine opens up the device to more applications. The developer claims an accuracy of above-97% across 12 languages, with a one-second latency depending on the network. No offline voice translation at the moment. (Update: ONE Mini has gained USD 52,591 from 893 backers on Kickstarter at press time from an initial goal of USD 28,557.)

Another device called WT2 also pre-sold on Kickstarter back in 2017 and was on show at the CES 2019 in Las Vegas. Creator Timekettle dubs the WT2 the “world’s first ear-to-ear wearable translator for face-to-face bilingual conversations…in near real-time.”

Despite comparisons to the “underwhelming Google Pixel Buds,” reviewers said the WT2 “performed admirably” and was “fast enough and accurate enough to support natural speech.” Well, the WT2 is now Amazon’s No. 1 bestseller for “foreign language translators.” It retails for about USD 220 and gets a rating just a few glimmers shy of five stars on Amazon. The top complaint? It does not work with iPhone X.

The other earpiece is from Fosa, ranked No. 10, ticket price USD 23 on Amazon. But the verdict from customers: “difficult to use” and “not a translator.” One user named dorisF said, “As a translator was not what I expected, doesn’t translate as others speaks, you have to stop and listen at every sentence, and sometimes does not get what the other person is talking, and it was very cheap at others websites.”

Lots of runway left then for new speech-to-speech tech, such as Google’s oddly named Translatotron.

So what did happen to those gadgets from Slator’s 2017 rundown that overpromised and underdelivered.

After Panasonic’s press release and the ensuing media coverage, nothing has been heard again about Megaphonyaku, the translating megaphone that allowed authorities to tell tourists (very loudly) to watch their step.

The ili, launched by Logbar Inc. at CES 2016, seems to have opened the floodgates for pendant-like translation devices (just type in “wearable translator” on Amazon and watch what happens).

After the initial 10,000 pre-order stock shipped out at the end of November 2017, Logbar restocked and started selling on Amazon in the Summer of 2018. Reviews of the ili, which retails for USD 199, have been generally positive — for Chinese. It supports only Chinese, Japanese, and Spanish into English and not the other way around.

Complaints range from the ili only supporting basic Spanish to the high-pitched voice emanating from the device. Still, sales have topped 70,000 and the ili is currently ranked No. 18 among Amazon’s translation device bestsellers.

Waverly Labs’ Pilot earpiece was among the many translation gadgets at CES 2019, with one report stating it is “still going strong” and retailing at USD 179. But where?

After its 2016 USD 4.42m Indiegogo run, you can now either buy it used on eBay or grab the last available one on Amazon for USD 399. It does not look too good for that last available pair though as customers have given it a one-star rating and called it a “waste,” “horrible,” and “disappointing.”

iFlytek seems to be doing a little better with two gadgets in the 400-dollar range making it to the Amazon bestseller list (No. 30; No. 40). Although not selling as well as other iFlytek gizmos, the unranked iFlytek Electronic Pocket Voice Translator, which retails for USD 249, was named by one travel blog the “Best for Translating Chinese.”

After all is said and done, the entire translation device ecosystem remains firmly ensconced in B2C territory. As Slator’s Florian Faes recently pointed out on the Troublesome Terps podcast, mission-critical interpretation is unlikely to move to an automated app anytime soon.