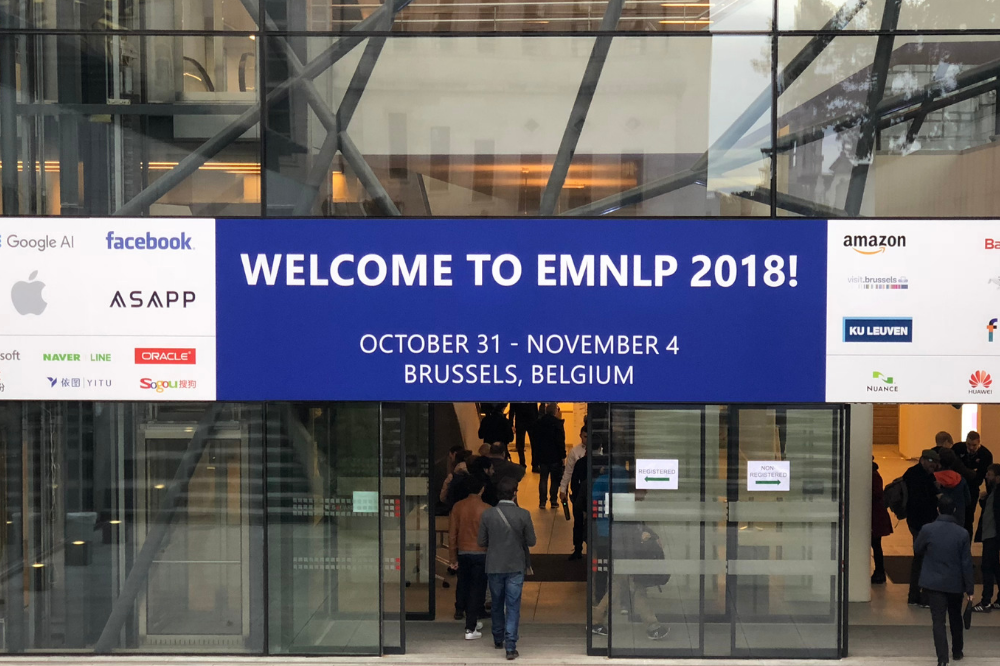 Slator attended this year’s EMNLP conference, held in Brussels, Belgium between October 31 and November 4, 2018. EMNLP stands for Empirical Methods in Natural Language Processing and is organised by the Association for Computational Linguistics (ACL).

The conference has been running annually for over 20 years and attracts participants across the natural language processing research space. On the back of a boom in anything related to artificial intelligence the numbers of participants ballooned to 2,500, more than double the number from 2017. Researchers from across the globe gathered to share insights from the latest research spanning the breadth of NLP.

Each year in the run up to the conference, researchers are asked to submit papers to the conference reviewers for consideration. EMNLP 2018 solicited papers on a range of topics, among them language models, spoken language processing, text mining, natural language generation, machine translation and machine learning for NLP.

Of the 2,231 long and short papers submitted in 2018, just under a quarter (549) were accepted. The authors of accepted papers were invited to showcase their research as either a talk (221) or a poster (328). Posters, containing research highlights from a chosen paper, were displayed on a collection of stands in the main hall. Conference attendees were able to browse the selection and discuss the topic of the poster with its author(s).

The geographic spread of conference submissions showed strong participation from Asia (42.5%). 32.1% of submissions came from North America and 20.9% from Europe, with other submissions coming from Latin America, Africa, the Middle East and Oceania.

Asia and the US also had a hefty sponsorship presence at the EMNLP 2018 conference, while European sponsors were in noticeably short supply.

The many conference sponsors included Google, Facebook, Apple, Amazon, Microsoft, Bloomberg, Baidu, Grammarly, ebay, Oracle, Yitu, Sogou, Duolingo and more. There were, in fact, two European companies on the rosta. For the big tech companies, EMNLP is not only an opportunity to share their own latest NLP research findings, but also to actively scout talent from among the conference attendees: research and development professionals from the academic research community, AI startups and big tech.

Machine translation is not a small part of the EMNLP mega conference and has its own conference stream, called the Conference on Machine Translation (WMT). WMT started out in 2006 as a series of workshops offered at EMNLP and became a full blown conference in its own right in 2016. EMNLP Organizer ACL was in fact originally named the Association for Machine Translation and Computational Linguistics (AMTCL) and changed name in 1962, six years after its founding.

EMNLP 2018 hosted the Third Conference of Machine Translation (WMT18). All accepted papers are included in the thousand-page conference proceedings.

Many of the talks and posters focused on reporting results from a “shared task,” a predefined problem that a group of researchers attempt to solve by approaching the task in different ways. There were seven shared tasks announced in preparation for WMT18:

The task involved building machine translation systems between English and any of seven languages in both directions (Chinese, Czech, Estonian, German, Finnish, Russian, and Turkish). The machine translation output was later evaluated by humans against a test set that had been translated by native, professional translators, selected for their knowledge of the domain.

One MT system that did not quite make the list (it placed fourth on the metric used below but technically tied for second place according to another metric) warrants honorable mention is ModernMT’s production engine, the machine translation engine co-developed by Translated.net, which made it into the second tier for the English to German language pair. Translated.net CEO Marco Trombetti posted on LinkedIn in celebration of the team’s achievement: “What for me is impressive is that 1) this was the first time MMT participated. 2) MMT did not submit a research prototype but its current enterprise product based on software already available on MMT github to everyone.”

Not only did Translated.net submit its enterprise machine translation product for the shared task, but the company also translated the Czech and German test sets to and from English.

The paper concludes that, “in addition to highlighting the best-performing systems in each of the 14 examined translation directions, the results indicate that for some language pairs, the state of the art in machine translation is very close to the performance of human translators.” However, the paper continues, “the style of evaluation (DA for individual sentences) has to be carefully considered before making any strong claims.”

NMT Research on the Up

As neural machine translation research shows no signs of slowing and attracts more interest from big tech names in 2018, adoption and application of NMT throughout the localization supply chain is also becoming more mature, and will continue to impact on productivity and pricing, changing the nature of the language industry landscape.