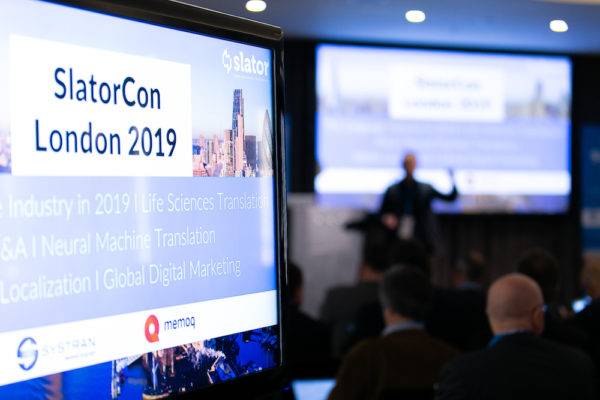 The atmosphere at SlatorCon London 2019 reflected the general climate of the language industry; in a word, upbeat. Held from noon of May 16, 2019 at the Bulgari Hotel just off the historic and picturesque Hyde Park in Central London, the event was sold out. Over a hundred buyers, vendors, investors, and advisors enjoyed the quick pace of the trademark SlatorCon format: back-to-back speakers and panels, a networking break in between, and a networking reception to cap the event.

Faes explained that the report is structured along industry verticals in line with much of the language industry, which, by its very nature, operates cross-border.

After a brief overview of how private equity and venture capital investors view the language industry, the focus shifted to neural machine translation and where it sits on Gartner’s famous Hype Cycle: close to the plateau of productivity.

Faes also touched on data annotation and AI support services as a potential new business line for language service providers. He closed by highlighting Technology, Media, and Gaming as the three most attractive verticals for translation and localization over the next three years, followed by Life Sciences. He singled out the Super Agencies, localization technology platforms, and tech-centric service providers as likely winners as the language industry transforms.

One company making an aggressive bet on the aforementioned AI support and data annotation services is language industry stalwart Lionbridge. During an on-stage interview with Slator Co-founder Andrew Smart, Lionbridge CEO John Fennelly highlighted the fact that the company returned to growth in 2018 as its focus on verticals such as gaming and life sciences paid off.

Asked about Lionbridge’s apparent strategic shift toward AI support services, Fennelly explained that the company has been in the business for over a decade and has developed a strong infrastructure to service this market. Fennelly sees the core localization business as transitioning from services to tech-enabled services — a trend that will likely leave a few smaller players struggling.

Next up was Systran CEO Jean Senellart. The machine translation pioneer discussed how the Tensorflow-based Transformer model appears to have established itself, for the time being, as the go-to framework.

The boom in research output around neural machine translation, Senellart said, meant more studies on areas such as combining MT with TM, post-editing of MT, low resource languages, and MT that goes beyond the sentence level.

Senellart highlighted ongoing efforts in unsupervised learning. He said it could, potentially, have a major impact on the future quality of machine translation, and mentioned the work of two young Paris-based researchers in the field. Furthermore, Senellart sees potential for translation technology to be applied to checking human translations and even content writing.

Media and the Cloud

One area where AI and NMT have had a somewhat limited impact to date has been media localization. Amanda Smith (Discovery Network), Justin Walton (ITV), and Jan-Hendrik Hein (A+E Networks UK) discussed current and future challenges in managing growing content volumes in a panel moderated by Slator’s Andrew Smart.

The panelists agreed that cloud-based dubbing has a bright future, but in-studio was not going to disappear anytime soon. ITV’s Walton said that when it comes to the cloud, he is keen to see progress in cloud-based localization management technologies. A+E Networks’s Hein, meanwhile, explained his team’s recent transition to a comprehensive project management platform. Amanda Smith of Discovery discussed how much linguistic work, such as dubbing and subtitling, is outsourced with only the review process being managed in-country as a final QC-step.

Then it was startup time. Mario Tarantino, Content Manager at Huel, discussed how localization had an immediate impact on increasing e-commerce conversion rates at the fast-growing startup. Tarantino recalled how, over the past few months, he went through several iterations of Huel’s localization operating model to arrive at the current single-vendor setup supported by a lean internal loc team.

From M&A to Linguistic Validation

After Tarantino, Welocalize CEO Smith Yewell took to the stage. Yewell gave a concise, well-structured presentation on how to execute M&A in the language industry, drawing on experience gathered during his company’s 17 acquisitions over the past two decades. Yewell sees three core areas for success: focus on purpose, avoid a culture clash, and clear execution.

The day’s final presentation came from Adelina Lear, Manager, Client Services at CRO giant ICON plc. Lear provided an overview of the vast range of documents in clinical trials that require translation. She then walked participants through what could be one of the language industry’s most complex areas operationally: linguistic validation. The process, which involves a series of steps such as multiple forward and back-translations, as well as extensive quality assurance, leaves zero margin for error.

The conference closed with a speaker’s panel, giving the audience an opportunity to directly engage with the presenters. Slator’s Andrew Smart concluded by giving participants a heads up about the upcoming SlatorCon San Francisco on September 12, 2019 and inviting everyone to join the networking reception.