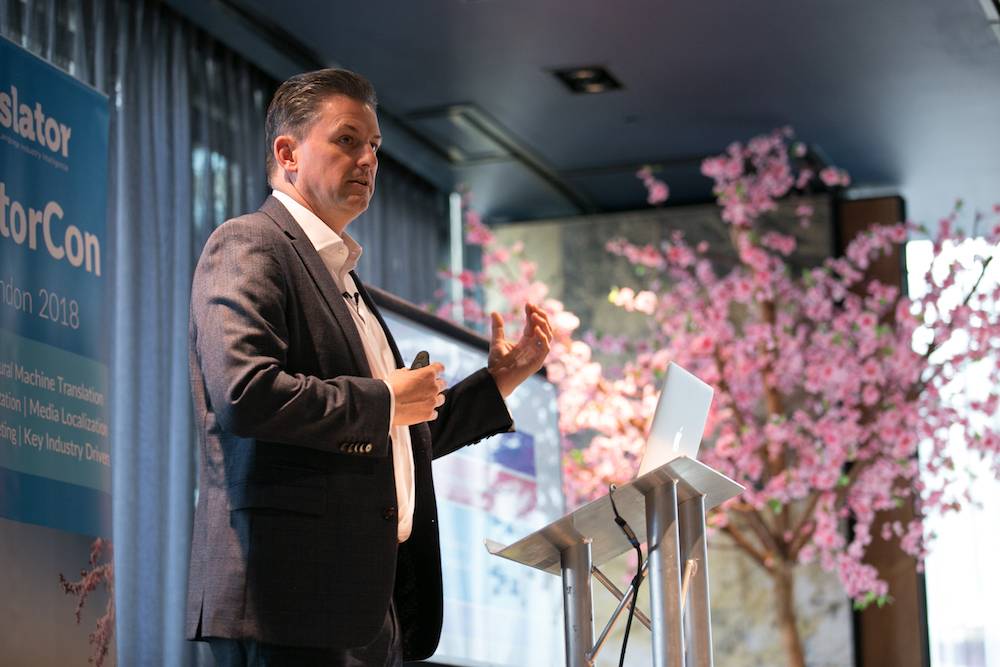 Richard Glasson, CEO of UK-based multilingual marketing implementation agency Hogarth Worldwide, shared with the SlatorCon London audience how his company deals with the increasingly complex requirements of modern content supply chains and delivery on May 17, 2018.

At the 2018 SlatorCon London held in Nobu Hotel Shoreditch, Glasson addressed over 80 industry peers and professionals and talked to them about the way the world of content, including multilingual content, is changing. He explained that Hogarth, part of the WPP Group, is reaching its 10th birthday this year.

“We’ve grown organically from the original 14 people to 4,000 people and half a billion dollars in revenue over that 10-year period,” he said. Glasson attributes the success to their people and “lucky timing.”

It just so happened that the disruptive model Hogarth built from the start caught on rapidly as the way worldwide advertising changed in recent years. It is this same model that allows them to grow today, in the face of what Glasson calls a “market fundamentally changed, driven by clients.”

In the context of global consolidation, clients are increasingly looking at their content on a global basis, Glasson said, adding that global consolidation offers “opportunities for cost savings, for efficiency, for using material more effectively.”

The final trend Glasson described was direct production relationships. Hogarth, he said, deals directly with the client, instead of the traditional setup of going through a creative agency.

“Crying Out” for Some Form of Consultancy

“Client content needs are growing and budgets are shrinking,” Glasson said. “There’s a paradox that is thrown up,” whereby brands need to think big but hit small. They need to communicate globally, but in a way that their marketing messaging is tailored not just to a specific country or culture, but to “a very small demographic within that country, to a particular age group, a particular interest group, whatever it may be.”

This is a significant issue brands need help with, according to Glasson. He said Hogarth found that “clients are really crying out for some form of consultancy and I mean that in the sense that we need to act as advisers, as experts.”

“Clients are really crying out for some form of consultancy and I mean that in the sense that we need to act as advisers, as experts”

Romina Franceschina, Hogarth’s Global Head of Language Services who joined the panel discussion, responded to a question from Slator Managing Director Florian Faes about how the shift in publisher ad revenues to companies like Google and Facebook was impacting Hogarth.

Franceschina said these clients actually present an opportunity since they are brands themselves and understand how different types of content for different users should be treated differently. She said these companies want involvement from their language supplier in terms of creative direction.

Glasson noted in his presentation, however, that a consultative approach often contradicts what clients expect: a price-driven, commodity approach.

Glasson said Hogarth uses a straightforward engagement model: every client should have a production strategy. Hogarth’s approach is on-site, off-site, off-shore, service delivery, where tasks can be broken down into activities that should either happen on-site with the client, off-site but still in a major city, or in an off-shore cost center offering the required quality.

Glasson said this delivery model’s perspective can be changed. For instance, instead of location, where it is “on-site, off-site, off-shore,” companies can look at it in terms of scale: “local, regional, global.”

On-site work is delivered locally, off-site work is usually post-production work done in a time zone shared with clients but not necessarily on the same city or country, and work done on off-shore locations are delivered to clients’ global organization. Hence, on-site, off-site, off-shore can become local, regional, global.

So how does this all come back to language? Glasson explained Hogarth considers language to belong under the “regional” category.

“Language primarily for us as an advertising business is based around transcreation,” he said. Transcreation is an activity that requires real expertise, real specialization, and very high quality talent working together.”

Glasson said Hogarth’s transcreation output comes from a small number of centers of excellence around the world, based in main offices. He also said there is some language work that is global instead of regional: “there has to be some element of commoditized language whether that is using machine translation or whether that is for longer form, if you like, lower value work.”

Glasson ended his talk by posing the question: “who is leading?” He challenged the audience to retake the reins and stay ahead  of the trends driving industry change. Glasson cautioned that “the side of the road is littered with corpses of companies that failed to innovate, change, or adapt,” urging participants to focus more attention innovation and reinvention.

Join the executive discussion and register early for SlatorCon San Francisco, the biggest SlatorCon yet: