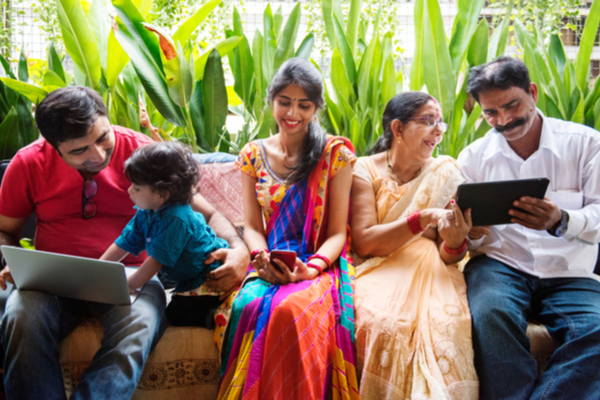 What is it like to be an Indian online user in 2019? Most products and services that an Indian consumer (let’s call her Leela) uses are marketed offline in her language, but supported online in English. That is, advertising and marketing in traditional channels, such as print and TV, have long switched to Indian languages.

Although India recognizes 22 languages as official, Hindi accounts for about half the population. Hindi spans more than one state, while other languages are mostly state-specific. For instance, Assamese is spoken in the state of Assam, Tamil is spoken in Tamil Nadu, and so on.

But online, strange as it may seem, Indian companies are yet to discover Indian languages. Take the online grocery delivery service BigBasket. While it is endorsed by the top-rated actor of the country, Shah Rukh Khan, in a Hindi ad, one would be hard-pressed to find Hindi on the BigBasket app or website.

Now, Leela’s parents, who do most of their grocery shopping at home, can understand some English. But they would have loved the BigBasket app more if they could order vegetables in a jiffy without having to mentally translate dhania into coriander first.

Online services available in Indian languages are making a killing. Indian language users number 234 million on the Internet and are growing faster than the English-speaking segment. The fact that at least 7 of the top 10 apps in India offer local language support is not mere coincidence. These apps are not of Indian origin, but their makers understand the importance of localization.

If Leela decides she wants to swap out her old phone for a new one or, maybe, buy a car, she would look around first to find the best bargain and product that meets her exact needs. The same applies to any financial product, hospital, or vacation.

Typically, she would talk to a friend who might have recently made a similar purchase because their first-hand testimonial really matters to her. She also does the same thing online by reading user reviews.

Different verticals may experience different buying journeys, but they will almost always be cross-channel.

Comparing two studies about the Indian customer’s automotive buying journey reveals their evolution in the span of a few years: While the 2014 Nielsen study showed that 48% of Indians conducted their research online before buying a car, this number shot up to 89% in 2018, as documented by the Google-Kantar TNS study. Brands can no longer assume that offline will continue to be a major influence on the Indian buyer.

User-generated content platforms such as Momspresso and social media networks such as ShareChat are giving regional language users a space to discuss, share, and interact online in their own tongue. However, the breadth of content in Indian languages is still not the same as it is in English. So, Leela’s buying journey is yet to be a smooth, unbroken, in-language experience.

When it comes to paying for something online, Leela is spoiled for choice. From online banking supported by nearly all banks, mobile wallets such as Paytm, international money transfer systems such as PayPal, to government-backed payment interfaces such as UPI, one would think there is no room for more players and products. This could not be more wrong. Yet, majority of Indian Internet users still do not spend online.

While companies try to reassure Leela (and her parents) that it is indeed safe to transact online, the actual payment process is still completely in English. This is one reason why a lot of proxy buying takes place in India.

If Leela’s parents want to buy something online, they would simply ask her to do it for them. Given a choice, however, they would much rather buy directly as they do in the offline world, without having to depend on anyone.

The grocery shopping experience repeats itself to Leela (and her parents), whether she buys toothpaste or a microwave oven on the Internet. But change may be afoot. Even if it looks like India has been slow to adopt text-based localization, the country is set to lead the world in voice — and this may well change how Indians buy online.

A third of all Google searches in 2018 were driven by voice. Also last year, Walmart-backed e-commerce company Flipkart bought an Indian voice and language tech startup.

Leading Indian telecom and Internet service provider Reliance Jio made a similar acquisition with Reverie. The voice search button is at the center of the Jio phone (a feature phone with many smartphone-like capabilities). The phone and data service from Reliance have — and there is no other way to put it — revolutionized the digital landscape of India. Amazon Alexa, too, decided to learn Indian languages.

Indian consumers on the Internet are no different from their peers in other multilingual societies. They like it when you speak to them in their language. Companies that do not see the superficial English tolerance for what it is may lose out to those that do.

The localization curve for India may not exactly mimic that of more mature economies, as the jumpstart with voice indicates. But considering localization as optional for India could quickly turn out to be a very big risk.