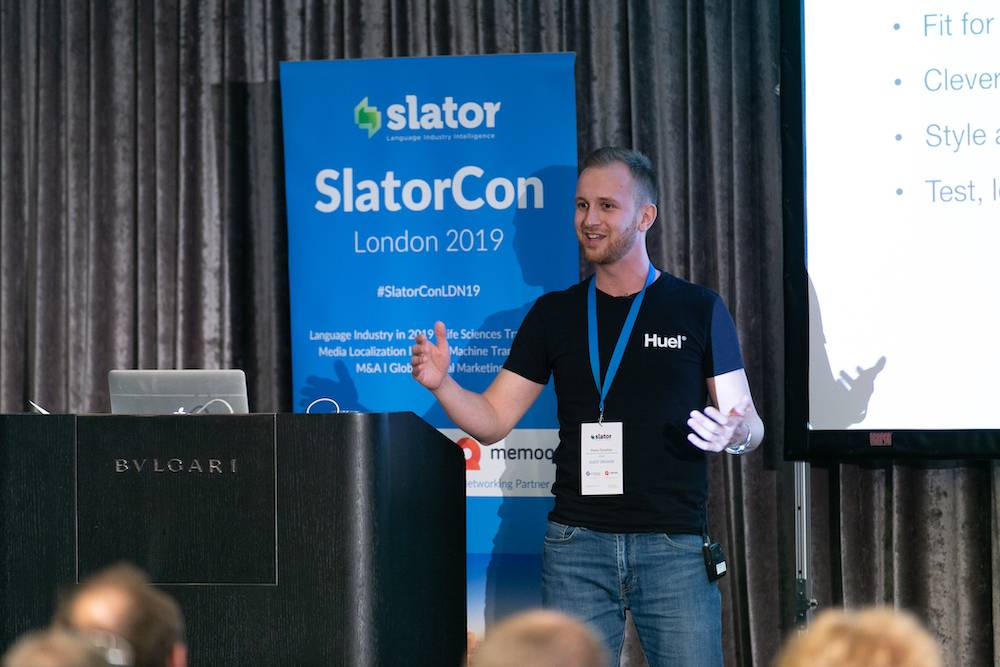 An increase in conversion rate of more than 1% may not sound like much. But when one considers that the average e-commerce conversion rate hovers between 1% and 3%, it becomes something to talk about. At SlatorCon London 2019, Mario Tarantino, Content and Merchandising Manager at Huel, said the company was able to bump up their conversion rate after implementing localization in 2018.

Huel is a UK-based company that makes “nutritionally complete food” for those short on time. It is backed by growth equity investor Highland Europe and claims to have sold over 50 million meals in 80 countries since its inception in 2015. It is present online in more than eight languages.

Tarantino was hired to get localization started up at Huel, which is Tarantino’s fourth employer in the language industry. (The first three were on the vendor side.)

“We have a certain seasonality in our sales activity,” Tarantino said during his SlatorCon presentation. That is, post-payday and the beginning of the week bring in more sales than the rest of the month or week. This impacts the on-demand nature of Huel’s localization workflow.

He explained, “If a Facebook ad or an email marketing campaign is launched in Germany and begins to get good traction, we want to launch the ad or the campaign the same day in Sweden. So, when we say ‘quick turnaround,’ that can mean just a few hours.”

Tarantino said, at Huel, it is essential for localization to not be process-driven. Instead, it needs to be driven by the needs of Huel’s prospects, its user community, internal stakeholders, and by the targets the company sets for itself. They rely a lot on data to make critical decisions as well as to measure success. Additionally, conversion rates are monitored before and after the launch of localized websites.

One of Tarantino’s initial tasks at Huel was to set a general localization strategy: decide on what content to translate and into which languages. Huel makes this decision based on the current and potential size of a market opportunity, along with other factors such as English literacy in target locales, Tarantino said.

As for the tech part of the strategy, Huel runs on Shopify, so do its international websites. “Shopify does not have an in-built multilingual platform. So, we use a third-party app for multilingual content delivery,” he said.

Huel’s localization team initially consisted of some in-house members and freelancers. As the in-house members moved on to other roles in the company, a cloud-based translation management system (TMS) was added to localization resources. In the next stage, they stopped using freelancers altogether and switched to a single language services provider (LSP). Somewhere down the line, Huel got rid of the TMS as well.

Responding to a question from the SlatorCon audience, Tarantino said the decision to ditch the TMS was motivated by two factors, the first being budget. It soon got to the point where content volumes became too much to handle, requiring a lot more management resources than Huel was willing to commit. The other factor was Tarantino’s own background of working at LSPs. He said, “I knew what to expect. I knew the risk factors. So far, it’s paid off.”

Huel now has a decentralized purchasing model for translation. That is, according to Tarantino, while he still owned the relationship with the vendor, other stakeholders in international content — such as marketing, the tech team, new product development, and compliance — do their purchasing independently.

In a pre-event interview with Slator, Tarantino summed up Huel’s localization journey: “When we started, we kept adding more systems and resources to the localization process. At some point, we began to pare it down. We now only have one external resource — an LSP — and one third-party app for delivering the translations. So, from five systems to just two.”