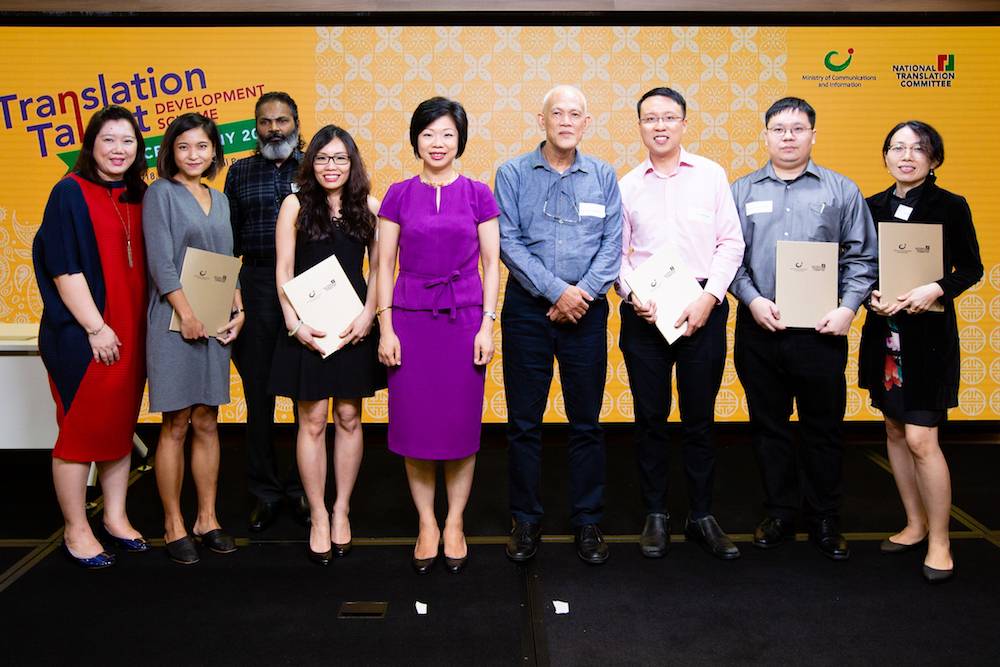 The grant recipients, all Singapore-based professionals working in the translation industry, will receive a bond-free subsidy of up to 90% of costs –  capped at SGD 10,000 (USD 7,647) per awardee – for training and courses related to translation, interpretation and language technology. The winners will also become NTC Ambassadors for a year.

The winners were announced at an award ceremony in Singapore on September 25, 2018 following several months of careful deliberation after the TTDS competition was originally announced back in January 2018.

The panel of judges found that the seven grant winners had all shown “deep knowledge and strong commitment towards their skill development and improvement of the industry,” according to a press release from the Singaporean Ministry of Communications and Information.

According to the press release, the seven grant winners are:

The winning industry insiders will gain access to a range of development activities, spanning conferences and Masters degree courses at local and overseas institutions including the Nanyang Technological University, the Singapore University of Social Sciences and Monash University, in Australia.

In a speech announcing the names of the grant recipients at the TTDS Inaugural Awards Ceremony, Ms Sim Ann, Senior Minister of State, Ministry of Communications and Information (MCI), and Chairman of the NTC, told guests what a number of the winners were specifically planning to do with their grants:

“Ms Lim plans to use the grant to offset the cost of her Master of Interpreting and Translation Studies programme at Monash University which started in July,” while Mr J Karunanithi, “the Deputy Accounts Director with the local Tamil newspaper, Tamil Murasu,…hopes to help the younger generation better appreciate the cultures of their fellow Singaporeans through translation. With the grant, Mr Karunanithi will be taking up modular courses and subsequently a degree in Tamil Language and Literature offered by SUSS.”

Ms Sim Ann also took the time to update guests on the progress that Singapore’s MCI has made with its machine translation project, which is funded under the Translational R&D Initiative (TransGrant) in support of Singapore’s Smart Nation and Digital Government drive. “Our machine translation engine achieved better accuracy in our local context than many commercially available translation tools for the English-Chinese language pair,” said Ms Sim Ann. The Ministry has begun working on the English-Malay engine and also hopes to develop an English-Tamil engine in the near future, Ms Sim Ann said.

“The use of Machine Translation technology is to augment human translators. It cannot replace the need for skilled translators and interpreters, as communication is ultimately a connection between people and we still need the human touch to deal with subtle expressions of emotions and meaning.”

Ms Sim Ann stressed that “the use of Machine Translation technology is to augment human translators. It cannot replace the need for skilled translators and interpreters, as communication is ultimately a connection between people and we still need the human touch to deal with subtle expressions of emotions and meaning.” This pronouncement echoes the sentiment of SAP’s Ferose V R, keynote speaker at the recent SlatorCon San Francisco, who believes that there will always be a place for humans in the translation workflow since “the heart of technology is humans” and the role of technology is to “elevate rather than deflate humans.”

In support of national initiatives

Ms Sim Ann concluded her speech by saying, “I strongly encourage more practitioners to apply for the TTDS grant to enhance your skills and knowledge.” The scheme is open to private sector professionals with at least three years of experience in translation or interpretation (or both). Individuals must be working in English and Chinese, English and Malay or English and Tamil.

The scheme has attracted interest from a range of language professionals in its debut year and the MCI press release says that the hopeful applicants ranged from 26 to 67 years in age, and included “business owners who are practicing freelance translators and interpreters.”

The press release also states that the TTDS grant is testament to the “NTC’s efforts to support local practitioners to deepen their translation capabilities and to nurture translation talents who will be important to Singapore’s translation industry.”

Singapore is a multilingual and multi-racial society, meaning that translation and the language industry play a key role for the local communities. Given Singapore’s linguistic diversity and the country’s geography, economic policies have tended to place significant importance on high-tech, high value-added industries and a well-trained and highly educated workforce.

Through the Translation Talent Development Scheme, the NTC is providing material support for continuous learning within the language industry and reflecting the values of Singapore’s wider initiatives, including the SkillsFuture movement, a national initiative designed to “provide Singaporeans with the opportunities to develop their fullest potential throughout life, regardless of their starting points.”