In this third and final report in Slator’s US language industry series, we look at how the sector has performed on a state-level since 2008. We sourced the data from the US Census Bureau and drilled down into NAICS Code: 541930, which comprises all companies doing business in “Translation and Interpretation Services.” The Census Bureau published the data set in April 2017 with the latest available data being for 2015.

In our May 2017 article, we found that total headcount in the US language industry nearly doubled since 2008. In June 2017, we analysed the average annual payroll per employee and state and found that, in 2015, language industry employees based in New York were paid 56% more on average than their peers in California.

To find out more about how the industry fared across the individual US states between 2008 and 2015 (the years for which data was most readily available), we first looked at the change in the number of companies active in the language industry 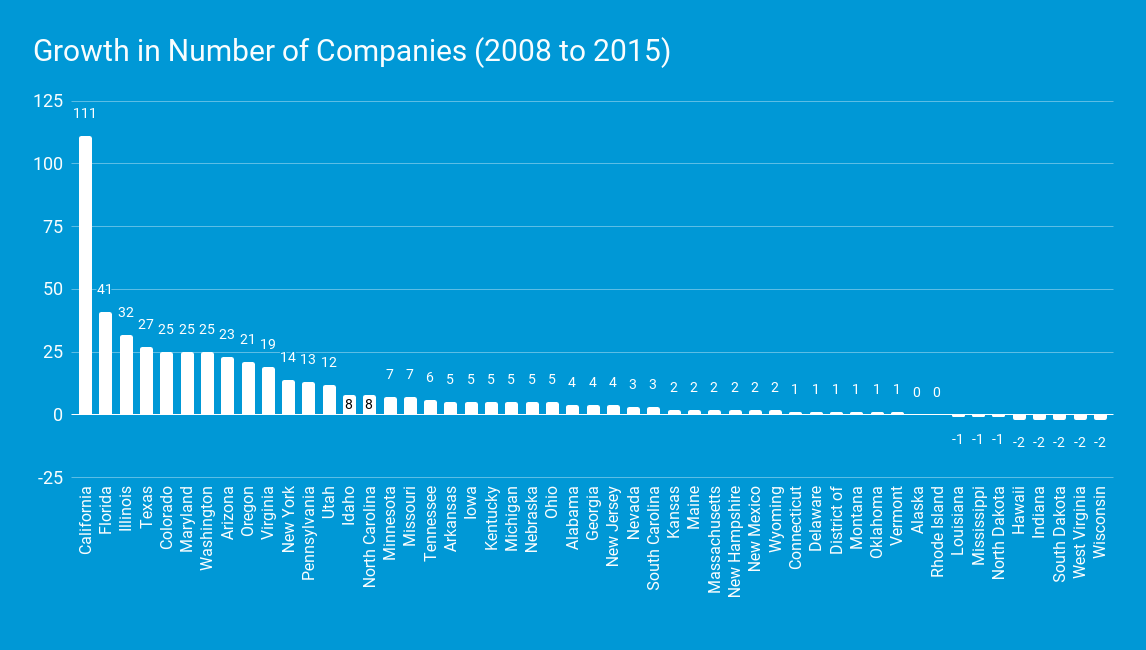 California, by far the largest market in the US by almost any metric, saw the most new companies enter the industry since 2008. Between 2008 and 2015, the total number of language service providers (LSPs) in California grew by 111. Trailing California by a significant gap are Florida (41), Illinois (32), Texas (27), and Colorado (25).

California is also #1 when measured by total number of jobs (+2,078) created between 2008 and 2015. In this category, however, California faced a strong contender for the number one position. Arizona, which also tops the the list of states with the most employees per company, added 2,070 jobs in the same period.

At the other end of the spectrum New York, Virginia, and to a lesser degree Missouri, South Carolina, New Jersey, and Hawaii, experienced a decline in total language industry employment. New York lost 368 language industry jobs over the period, and Virginia shed 253.

Trends in Average Payroll per Employee

The Census Bureau data allows to draw conclusions about average annual payroll by employee by dividing total payroll by the number of employees. While the data appears fairly accurate for larger states, it becomes somewhat noisy for states with only a handful of registered LSPs.

To get a sense of how language industry pay has evolved in the different US states between 2008 and 2015, we analyzed the data for all states which reported a total of 200 employees or more.

One conclusion from the dataset is that company formation and job creation is most active in the West of the United States (California, Texas, Arizona). In terms of compensation, the picture is more mixed. While California and Arizona continue to create jobs, annual average payroll per employee is trending lower in these two states as the market is becoming ever more competitive. Compensation in markets like New York, while still high in absolute terms, is also trending down.