On August 17, 2016, Inc. Magazine published its annual list of the 5,000 fastest growing companies in the United States. The list ranks companies according to percentage-revenue growth over a three-year period. Inc. explained the list includes only privately held, for-profit companies that are independent entities and not another company’s subsidiary.

Many US states and cities as well as industry organizations piggyback on Inc.’s data collection effort and scour the ranking for companies in their respective region or industry. Let Slator do it for the language industry.

To be considered for the list, a company must have generated revenue of at least USD 0.1m as of March 31, 2012 and grown to at least USD 2m by 2015. Inc. Magazine also requires the CEO and a certified accountant or attorney to sign off on the numbers. There is no category for language services (translation, interpretation, etc.), yet most LSPs are listed under “Business Products & Services.” 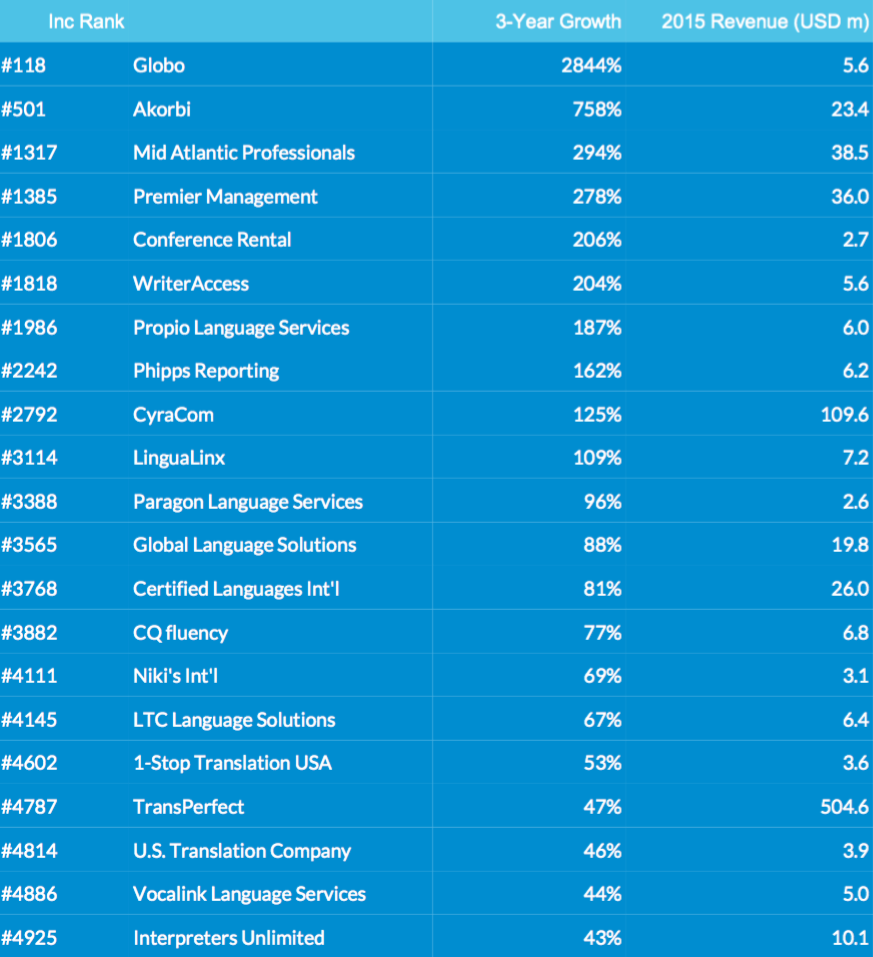 Runner-up is Akorbi. The Texas-based LSP must be doing something right, as revenues grew by 758% over the past three years and clocked in at USD 23.4m in 2015. Also notable is CyraCom. The remote interpretation company grew an impressive 125%, booking USD 109.6m in revenue for 2015. Copywriting platform WriterAccess, which earlier this year added translators to its service portfolio, also had a good few years with a growth of 204% over the three-year period and revenues of USD 5.6m in 2015.

Unlike for 2015, Welocalize was absent from the list this year. Their recent acquisition, Global Language Solutions, registered 88% growth between 2012–2015 and USD 19.8m in revenue last year. If they keep this up, we may see Welocalize again in 2017.

A majority of the companies (11) fall into the USD 3–10m dollar bracket, proving that, yes, growing from a low base is easier, but also that scale is not yet everything in language services; and that niche competency and tech-savviness can propel small vendors to great heights very rapidly.

Editor’s Note: If you think we overlooked any company, e-mail us at editor@slator.com.