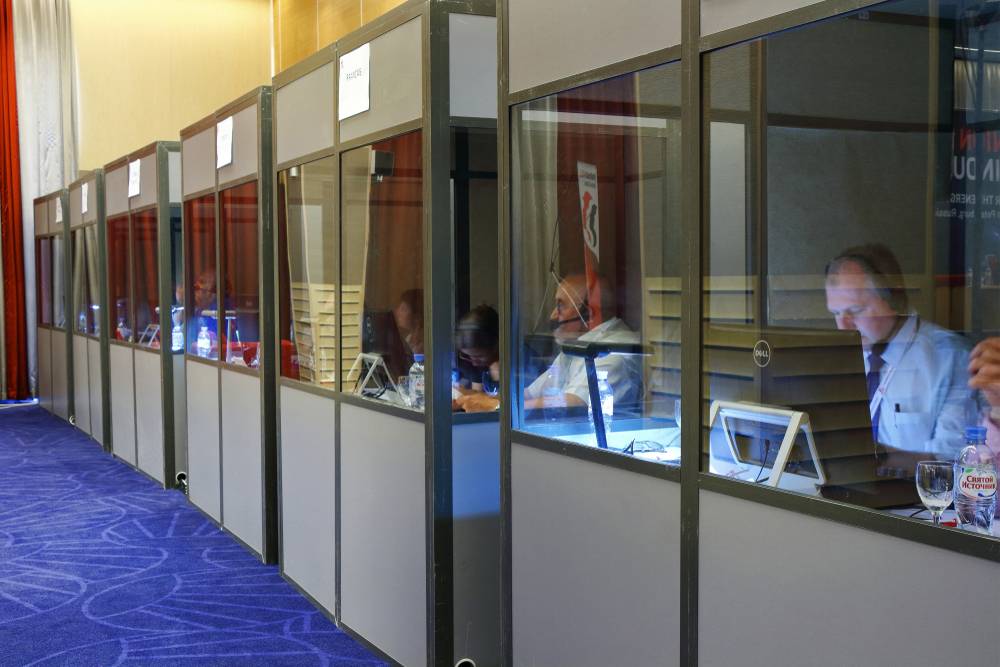 Recent research into simultaneous interpretation shows just how much the task is less about verbatim translation and more about juggling cognitively demanding tasks inside an interpreter’s brain.

Making the rounds of science and medical websites is a research article entitled “Testing the efforts model of simultaneous interpreting: An ERP study.” The article presents the experiment and findings of researchers from the Centre for Bioelectric Interfaces and the Centre for Cognition & Decision Making of the Higher School of Economics, a top Russian university.

The researchers measured what goes on inside the heads of nine professional interpreters while performing simultaneous interpretation using an electroencephalogram (EEG) to scan their brain activity.

The researchers wanted to understand whether interpreters performed these three functions simultaneously or if they instead distributed their attention between functions.

The Efforts Model also predicts that as interpreters need to focus more on memory, they will have less cognitive capacity available for listening. Koshkin notes in the article that this may seem like common sense, but it has not been empirically tested.

Koshkin said that only one other study has attempted to test the model via experiments; although, as the author of that study himself admitted, it lacked “precise quantitative measurement.”

Testing Out the Model

“The art of simultaneous interpreting has little to do with word-for-word translation. Rather, it is to know when to slow down, abstract from the speaker’s words to be able to produce an elegant translation”

As the experiment was only interested in the Russian-English language pair — also the primary and secondary native languages of the interpreters — half the speeches were translated into Russian and the other half into English.

The researchers used a technique called event-related potential (ERP) to help produce measurable output from EEG readings of the interpreters’ brain activity as they performed their tasks.

The research article concluded by saying “the data suggested that simultaneous interpreters work in the mode of dynamic redistribution of attention.”

“The more the interpreter lags from the speaker, the more cognitive resources are engaged by working memory to hold and process previous information, and the less resources are available to process new information,” Koshkin wrote. The research basically supports common wisdom: It is important not to fall behind the speaker too much.

“The art of simultaneous interpreting has little to do with word-for-word translation. Rather, it is to know when to slow down, abstract from the speaker’s words to be able to produce an elegant translation based on a larger context constructed from the speaker’s previous discourse and common sense,” Koshkin stated.

On the limitations of their research, Koshkin mentioned factors such as the narrow scope of participants, the specific language pair, and potential differences in the capabilities of professional interpreters. Furthermore, the experiment did not analyze the third part of the Efforts Model: speaking in the target language.

“I hope that our research will help our colleagues find the perfect number of words that allows them to understand and convey the meaning of what was said to the audience without missing important details due to memory overload,” Koshkin said.