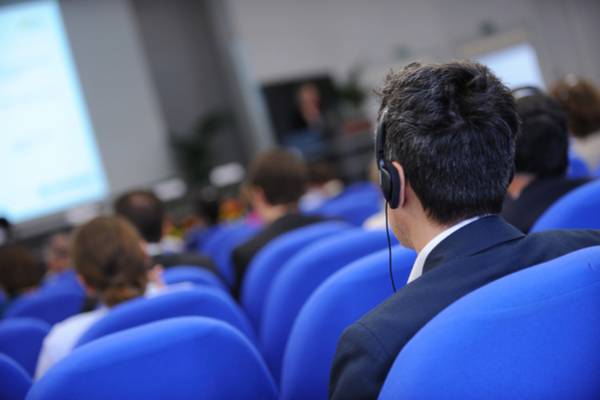 Interprefy, a Zurich-based company that provides remote simultaneous interpretation technology, has raised another CHF 0.5m in bridge funding from private investors. The round, which completed in May 2018, valued the company at CHF 11.5m (USD 11.49m) post-money, according to CEO Kim Ludvigsen.

In addition to its U.S. presence, Interprefy has recently begun selling into Japan through a local partnership. It also has a technical support team in Belgrade, Serbia, and employs around 20 people full time.

The company’s client base include multinational corporations, NGOs, and sports associations and has partners with a handful of language service providers (LSPs) and event equipment companies, including Ubiqus (UK). Interprefy targets the market for simultaneous translation, where its app-based technology allows events producers to cut costs by doing away with on-site interpreter booths.

This is Interprefy’s fifth funding round since the company’s launch in 2014, and its second this year after the company raised CHF 1.2m in January 2018. This latest round brings the total funding Interprefy has raised to date to around CHF 3.7m (USD 3.67m).

Interprefy, which claims to have generated CHF 0.2m in 2017 revenue, will use the proceeds from the most recent funding round to add new features and services to Interprefy’s platform, automate order and events processing, develop marketing and partnerships and build interpreter hubs, according to Interprefty CEO Kim Ludvigsen.

With this fifth funding round, Interprefy is bringing in a new non-executive director in David Medrano, CEO of InterpreNet, who joins the board. Ludvigsen said that InterpreNet is a partner company of Interprefy which “distributes Interprefy’s services in the Americas and also provides interpreters worldwide.”

Former CLS Communication CEO Matthias Trümpy and now CEO of SwissGlobal Language Services, who joined Interprefy’s board of directors in early August 2016, departed the board in May 2018 along with Jeanette Ørsted, Head of Translation at Plougmann & Vingtoft, a consultancy firm for intellectual property rights (IPR). Interprefy’s current shareholders include the management, board members and private investors.

Interprefy is drip-funding its business by raising small amounts of money as and when it needs to, a strategy favored by many financially savvy startup founders. One benefit of doing so is that the company can ask for incrementally higher valuations with each round so the existing shareholders effectively sacrifice less equity with each round and the dilution of ownership is minimized. Ludvigsen also said that “further capital will be raised.”

Interprefy is one in a list of language industry startups who have gone through funding rounds this year. Also in October 2018, localization tech company Qordoba raised USD 11.5m in a series B round, while Lilt raised a USD 9.5M Series A led by VC giant Sequoia. Unbabel raised a USD 23m series B round in January 2018, Smartcat raised USD 7m in series A in June 2018, and interpreting software start-up Boostlingo raised USD 3.4m in series A funding in August 2018, making 2018 one of the busiest years in language industry funding ever.

Join the discussion and register now to for SlatorCon Zurich on November 29th.