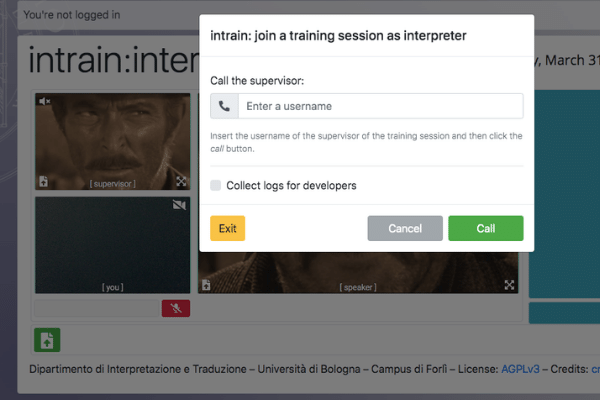 The platform, accessible through the European Commission’s Knowledge Centre on Interpretation (KCI) since March 6, 2020, had actually been up and running since Nov 2019.

Spinolo told Slator that, even before the outbreak, InTrain was already being used at the Department of Interpreting and Translation (DIT) of the University of Bologna at Forlì, where both she and Carioli work. Students would usually log on to InTrain to practice together during weekends and holidays.

“During the outbreak, and after news on InTrain was published on the KCI, we have noticed an increase in requests for help on using InTrain from colleagues both in Italy and abroad,” Spinolo said.

After having studied remote dialog interpreting, Spinolo, a researcher and trainer, began looking into remote simultaneous interpreting (RSI), which she had practised as a professional. Then Carioli, an IT specialist at the DIT, “worked the real magic with the development,” Spinolo said. Thus, InTrain was developed within the DIT at the University of Bologna, with Carioli credited as developer.

According to Carioli, InTrain is open source and was developed under the GNU Affero General Public License and is, “at the moment, a fully client-based web application and the source code is actually downloaded completely every time you run it. We have not packaged it yet, but it will be fully available on GitHub.”

Carioli said they do not, as yet, have any usage statistics as they are still focused on developing the application. Asked to elaborate on which aspects they are currently working on, Carioli told Slator that “some features are still experimental, for example the possibility to use a YouTube video instead of a speaker; and we will try to make InTrain compatible with more browsers. At the moment it only works with Google Chrome and Mozilla Firefox.”

As its name suggests, InTrain was conceived and developed specifically as a training tool that connects (for now) a maximum of three participants with as many user profiles.

The Interpreter is the student or trainee practising simultaneous interpreting. The Supervisor is the teacher or assessor listening to or evaluating the Interpreter. The Speaker could be someone delivering a speech in real-time, or the Supervisor may opt for a video.

Spinolo said the platform can currently be used for one-on-one sessions between trainer and interpreter (with or without a speaker), or for peer-to-peer exercise and assessment, where one interpreter can log in as the Supervisor, listen to their peer interpreting, and then provide feedback.

She added that this allows interpreters to train “with peers located elsewhere in the world, in a sort of tandem exchange where they can pair up based on their working languages to practice together.”

As an example, Spinolo cites an instance where “an Italian in Forlì with Spanish as a working language could pair up with a Spanish [interpreter] from another university having Italian as his/her working language, and they could read speeches to each other and give each other feedback.”

The InTrain user manual can be found here; and you can try out the platform here.