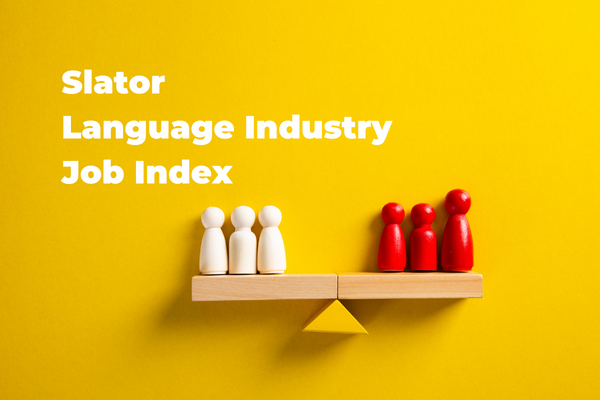 Employment and hiring activity in the global language market continued its upward trend, hitting its highest-ever level in November 2022 since the Slator Language Industry Job Index (LIJI) was launched in July 2018.

An analysis of indicators that contribute to the Slator Jobs Index reveals that the number of jobs within language service providers (LSPs) decreased in October 2022 compared to the prior month, and is lower than at the start of 2022.

However, the overall number of roles in the industry — taking into account in-house localization roles with buy-side enterprises — increased.

The broader economic picture has also proved better than feared as Q3 2022 GDP numbers in both the United States and the European Union surprised on the upside.

In the month’s only funding story, AI content platform Jasper announced it had raised USD 125m in series A funding.

London-listed Super Agency, RWS, also published a trading update for FY 2022, which reported an 8% increase in revenues despite a “reduced volume of activity” in H1 2022. Meanwhile, in New Zealand, Straker posted revenue growth of 19% driven by acquisitions.

Overall labor market conditions remain tight in the US with the unemployment rate falling marginally to 3.5% in September 2022, but remaining below market expectations. Unemployment rates in Europe continue to broadly decline in 2022, compared to 2021.

Despite this, the language industry jobs market remains steady across the US and the EU. This was reflected on Slator’s job platform LocJobs, where there were 15 new job postings in October. Companies such as Morningside, Supertext, memoQ, and posted their vacancies for roles in translation, engineering, and more.