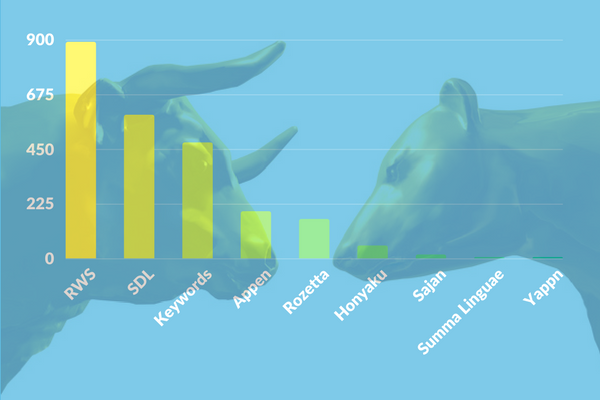 While the the MSCI World (a broad measure of the world’s stock markets) is up 5.9% YTD and 16.4% over the last 12 months, for a group of nine listed language service providers those figures averaged 15.1% and 47.1%.

Annual revenues have somehow become the yardstick of choice in the language industry. But if revenues were such a good indicator of a company’s current and future performance, why is Tesla (USD 7bn in revenues) about to knock General Motors (USD 166bn in revenues) off the throne as America’s most valuable car company?

Now that the first quarter of 2017 is behind us, it is as good a time as any to check in on how shares in LSPs have performed recently, and what value investors assign to this select group of companies. 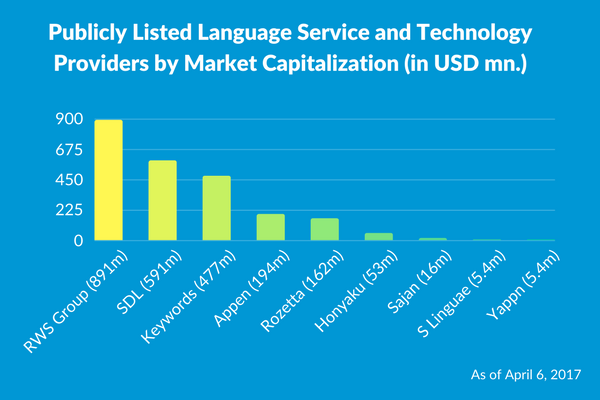 Retaining its crown as the world’s most valuable listed LSP is UK-based patent translator RWS. The company recently appointed a new CEO and splurged on the acquisition of life sciences specialist LUZ.

After a strong bull run through the end of 2016, investors have taken a bit of a breather and the stock is down by almost 10% YTD. Still, RWS’ market capitalization weighs in at a hefty USD 891m.

Investors who bet early on game localizer Keywords Studios are now enjoying their time in the sun. The Dublin-based company again outperformed peers over the past 12 months, as shares surged over 200%. Keywords’ year-to-date rise of 36% has pushed its market cap near the half-billion-dollar mark.

SDL CEO Adolfo Hernandez has managed to convince investors that he is succeeding in turning around the UK-based language service provider. After a few acquisitions had turned sour, Hernandez was brought on board to refocus the company on its core: language services and technology. 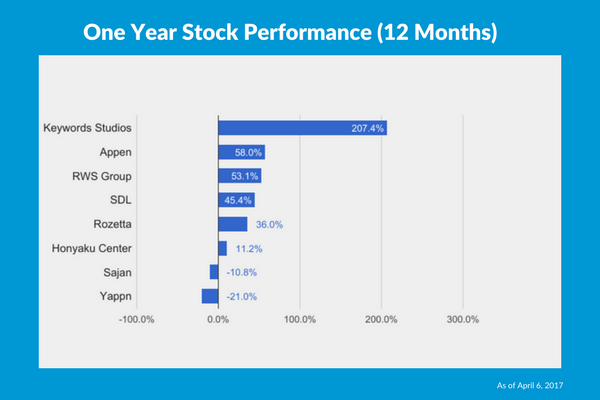 The markets seem to agree with the new strategy, and SDL’s shares have been up 45% over the past 12 months. Meanwhile, the broader UK stock index FTSE 100 has been up 18% over the same period. SDL’s market cap is closing in on USD 600m.

SDL may just have a few more tricks up its sleeve to further drive the stock north. CFO Dominic Lavelle recently told Slator SDL’s “current operating model is not much younger than the age of the business itself” — and the company disclosed its internal translator army of hundreds spends less than half their time, well, translating. Higher internal productivity and the corresponding widening of the gross margin would filter down directly to the bottom line and likely support the stock this year.

So far in 2017, Australia’s Appen has given up some of the strong advances it made in 2016. Still, while the stock is down by about 7% this year, it is up nearly 60% over the last 12 months. A few investors probably decided to cash in on their gains. 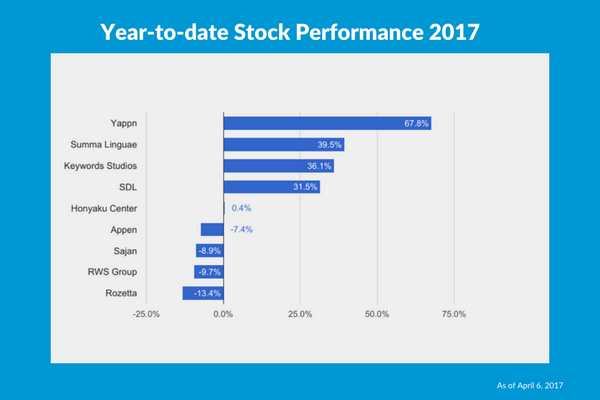 Listed conglomerates operating language service units, such as Donnelley Financial or Teleperformance, were not included here as the majority of their business is not related to language services or technology. Twelve-month figures for Summa Linguae were not immediately available.