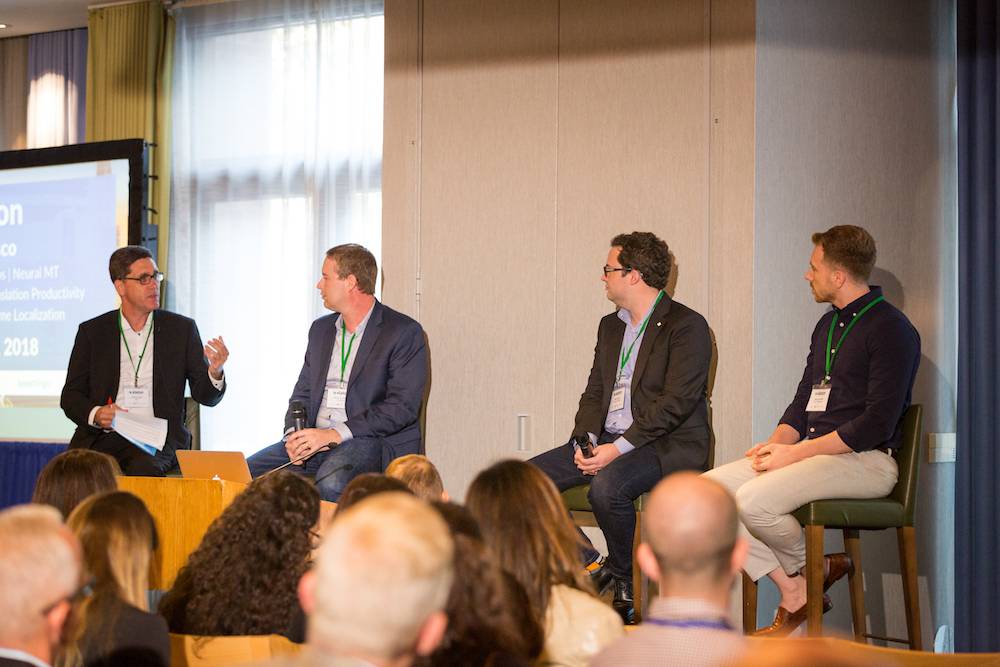 Conventional wisdom shows that two-thirds of startups will stall at some point within the VC investment process and fail to secure follow up funding or exit. Less than 1% will ever become unicorns with valuations exceeding USD 1bn.

At SlatorCon San Francisco 2018, Slator Co-Founder Andrew Smart talked to a panel of startup founders and leaders within the industry to learn more about the opportunities and challenges of building a startup in the language services and tech market.

Bryan Forrester, CEO of Boostlingo, Matt Conger, CEO of Cadence Translate, and Jeffrey Sandford, Co-Founder and CTO of Wovn Technologies joined Smart on stage to share their experiences and insights with the 120 senior executives in attendance.

According to a Fortune article on startup failure, the top self-reported reason why startups failed was that there was no market need for the solution they developed.

Forrester commented that despite headwinds such as compliance and immigration, “we actually think it’s a huge growth market, a greenfield market and there’s a lot of businesses out there that actually need interpreting but they don’t even know these services exist.”

“There’s a lot of businesses out there that actually need interpreting but they don’t even know these services exist” — Bryan Forrester, CEO, Boostlingo

As for Cadence Translate, CEO Conger explained they were resolving a unique challenge for a premium niche market. “Every day we found that there are around five thousand investor due diligence calls that happen around the world, and they’re paying anywhere from a thousand to USD 1,500 per phone call,” he said.

And so Cadence Translate became a multilingual research partner for firms that perform overseas investments or M&A due diligence.

However, Conger said they were doing more than just interpreting—they were facilitating. “Interpreters are taking this Hippocratic oath not to insert themselves into a dialogue,” he said. “But in reality, investors…want someone who’s going to get on these calls and get to the bottom of the truth, almost like a journalist or an investigator.”

“Investors want someone who’s going to get on these calls and get to the bottom of the truth” — Matt Conger, CEO, Cadence Translate

“We’re focused on training both clients and more importantly interpreters to help bridge that gap,” he concluded.

For Wovn, CEO Sandford explained they resolved two major pain points: they allowed developers “to go completely outside of the localization process and not worry about how their code will affect [it],” and they allowed content managers “to not worry about the details and hiccups along the way and just focus on the content.”

As a website localization service, Sandford encapsulated their solution as separating the development from the content management.

He was enthusiastic about inter-market opportunities between Japan and China, and said Southeast Asia, India, and Africa are all emerging digital economies and potential markets.

Where’s the Money at?

All three companies in the panel have raised funds, with Slator covering Wovn’s funding rounds as early as 2015 and 2016. In 2017, Slator covered Cadence joining 500 Startups Accelerator and securing a USD 0.65m seed round. As the youngest of the group, Boostlingo recently completed a Series A funding round worth USD 3.4m in August 2018.

Both Boostlingo and Cadence Translate were keen on Angel Investors. Part of the reason why, according to Booslitngo’s Forrester, was because other investors did not fully grasp what they wanted to do and had to be informed in layman’s terms. “At our stage we preferred to stay away from institutional money. VCs and private equity” he said, “because we know a lot of angel investors who believe in what we do.”

For Conger, he said they “found the most traction from executives who left their home country and either worked as an executive in another country or became a startup founder. Those were very quick conversations because they all felt the pain point immediately,” he added.

In comparison, Wovn has a broad variety of current investors. Sandford said the investment base is “a little bit different in Japan,” noting that all their investors are Japan-based. “Some are purely investment funds, some are printing companies that want to do translation as well and kind of work with us,” he shared.

“It’s actually been quite easy for us to find investment,” he said, explaining that they had “really good reactions” from investors and the investment climate was favorable at the moment with the Japanese government trying to push funds into startups.

It turns out all startups had a common theme: a learning curve where they all had to change their target clients and / or offering from what they originally planned.

“When we started Wovn we expected it’ll be used by personal blogs, little corporate websites here and there. We were very wrong about that” — Jeffrey Sandford, co-founder and CTO, Wovn Technologies

He said they had to explain to clients how localization workflows worked. He explained that instead of the simple, self-served SaaS solution they envisioned, clients needed more of a localization service as well.

For Conger and Cadence Translate, they wanted to first build an interpreter marketplace. “No one really wanted that,” he said, “Interpreters didn’t want the exposure, didn’t want to sign up for yet another service, and our buyers just wanted to get on the phone and speak to an account manager.” Today Cadence runs on Salesforce and Conger said it accelerated their capabilities in terms of data security and serving clients quickly.

Boostlingo likewise had their own pivot moment. “Early on when we didn’t know better, [we wanted to be] Uber for interpreting,” Forrester said. But then they learned about the complexities of what they wanted to achieve. “It took us about four days [to realize] that we wanted to not be a service provider and qualify and vet interpreters,” he said.

“We’d probably already be out of business if we had gone down that route,” Forrester admitted. “We decided that we wanted to be the technology layer…[and tell partners]: ‘you do what you do best—vet and qualify your interpreters and provide services to clients. Let us do the technology piece’.”

Among other discussion points during the panel were the challenges each startup faced in their experiences thus far.

Wovn’s Sandford told a cautionary tale about making sure clients are educated about the limitations of machine translation without human post-editing. Forrester said it was difficult letting team members go.

Cadence’s Conger touched on the difficulty in finding talent. “I think that hiring is very difficult. You’re selling dreams. You’re selling them less pay, more equity, and you’re selling them on the vision,” he said. “Especially here in San Francisco, when you’re up against the ‘Salesforces’ of the world, [talents] go into interviews and they’re already being served caviar.”

A common challenge among all the panelists—and startups in general—was funding. Forrester said they “knocked on a lot of doors” and Conger shared that he found it was harder to figure out how to spend the money and return value than to actually raise the money.

Join the discussion and register for SlatorCon Zurich on November 29, 2018.