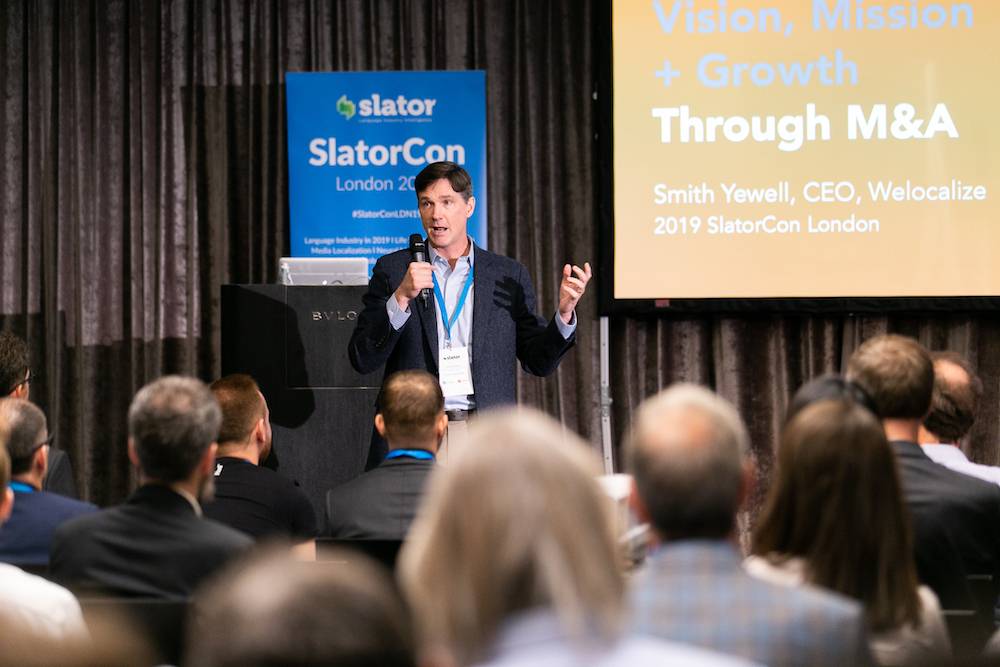 “More than half of M&A deals fail to create value,” Welocalize CEO Smith Yewell told the audience at SlatorCon London 2019. Yewell spoke on “Mission, Vision + Growth Through M&A” at the sold-out event held on May 16, 2019 at the Bulgari Hotel in Central London.

It has been over two decades since Yewell founded the Maryland-based language service provider, and Welocalize has, thus far, acquired 17 companies in nine countries. “Out of those 17, we had one that didn’t work as expected,” Yewell said.

He likened M&A to an arranged marriage. “Imagine, all your life your parents tell you, ‘Don’t talk to strangers. It’s dangerous.’ And then, one day, they tell you it’s time for you to marry one.”

“Like marriage, unfortunately, half of M&A fails,” Yewell quipped, eliciting laughter from the room. He cited three reasons for this failure: a lack of clear vision in the combined company; a culture clash; and an unclear path to execution.

However, according to Yewell, “the biggest threat to M&A is when the talent leaves.” This holds especially true for Welocalize because, as its CEO said, “We’re a service company.”

The potential for the employee — personal and professional — must be articulated, he explained. “Why is it going to be more interesting for you in the combination? Why would you even want to stay in the combined company?” Pointing to Welocalize’s track record in the area, he said it is important to “produce tangible evidence” that staying is a good option for talent to have a sense of purpose going into the combined organization.

Another thing that throws a spanner in the works is the wrong attitude. “‘Did we merge? Did you buy me? Are we equals?’ — these are the wrong questions to ask,” according to Yewell. “If you ask such questions, it creates a struggle right out of the gate. So it has to be moving from those questions to ‘Where’s the potential for our staff? Where’s the potential for our clients?’”

Ultimately, he said, “regardless of what culture you come from, we should agree on the basics: Doing the right thing; communicating when something goes wrong, not burying it; getting in front of a problem; and creating an environment where conflict can happen without destroying relationships.”

Next Up, Data Transformation

Yewell recalled, “When I came to the industry 22 years ago, it was an analog world. Language was a feature, it wasn’t a function. And it was a feature that was left at the end of the train.”

“In a digital world,” he continued, “because everything is so instantaneous, it’s now moving to the front of the train. It has to because it becomes a function that actually drives performance of whatever you’re trying to achieve in a customer experience — and that’s measurable.”

It is here, in “leading the convergence between digital marketing and localization services,” that the Welocalize CEO sees the “opportunity in the industry [and] what we’re looking for in M&A.”

Yewell said the average size of a language task at Welocalize is less than 200 words. “For our biggest customer, we might do over 30,000 tasks a month. For a workforce to adapt to that, you need technology. You need metadata, on the client side and on the workforce side, to make the ideal match.”

“Data Transformation is the fastest growing part of Welocalize right now,” he added. “That’s taking unstructured datasets and transforming them into structured data sets that can drive business outcomes. For example, voice data sets — the biggest segment — matching input with output, and annotating where it went right or wrong. That applies to NLP (natural language processing) data and machine translation.”

He described Digital Transformation as taking place in four phases: analog, digital, machine learning, and artificial intelligence; and that “over 50% of Welocalize services today go beyond translation projects to enable clients, especially in phases 2 and 3.”

An ideal M&A target for Welocalize would, therefore, be a company that can, Yewell said, “expand and deepen our content and data transformation capabilities across all phases.”