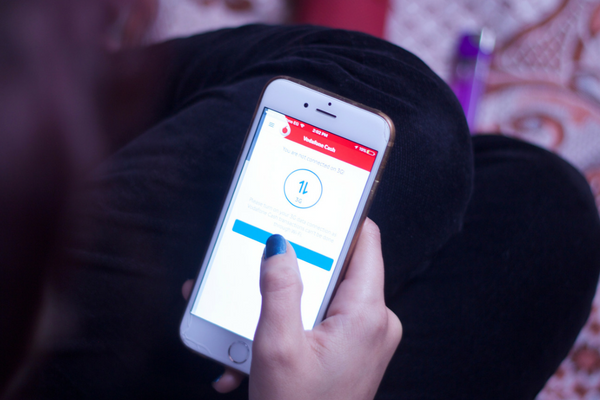 Chat via SMS revolves around money management and personal finance. These conversations are with people who are enabled by the platform to manage their meager income well and even set aside money for savings.

In the words of CEO and Co-Founder Ben Knelman, the challenge for their young company is that “so many people feel isolated in their financial lives. How do you create tools that change how people think and feel about their money?”

The eight-year-old company headquartered in San Carlos, California started out as a class project at the Sandford design school in 2010.

Knelman wrote in the company’s first blog post that they continued the project after seeing that the financial coaching system they developed was able to help their interviewees in a big way. Karina, a Mexican immigrant who works as a night shift janitor, in particular, was able to save USD 2,000 in a year’s time on income that’s barely enough to cover the basic necessities of life.

Hence, the platform’s first users were first-generation Latino immigrants around the Stanford area. They keep track of their daily expenses and send the details to Juntos via text message. At the end of the month, they get a summary of their expenditures to help them make sense of their finances. The platform also coaches people on how to work towards a financial goal.

The company has since received some USD 7.4m in funding to keep the conversations going.

“During the early years of Juntos, we created our messages directly in Spanish. As we grew to other regions, we realized that by writing in English and then localizing to many different languages we would be able to scale up and reach many more users more quickly and efficiently,” said Peter Illetschko, Director of Localization at Juntos, in an email interview with Slator.

This year, the company is launching partnerships in Vietnam, Ivory Coast (French), India, and South Africa while continuing work in Zambia, Colombia, Mexico and the Philippines.

“As many of Slator’s readers probably know juntos means “together,” and we try to embody that credo in our daily work as a global company,” Illetschko said.

Localization as a Force Multiplier

As Juntos’ business model is anchored on conversations, Illetschko emphasized that localization is a force multiplier.

“At Juntos, we are in the fortunate position that we all understand that localization is central to our work,” he said. The localization team, however, is a one-man team who manages the front-to-end localization process and is part of the design team.

The linguistic work is all outsourced to freelancers and Illetschko is responsible for the creation of the localization process, advising on technical integration between internal systems and the localization workbench, vendor management and training, and management of the translation cycles.

“Because of a character limit of 160 per text message, it is challenging to communicate empathy, trust, and content in each message. Maintaining an appropriate linguistic style for our user base under these circumstances is an interesting challenge,” he explained.

“To be successful, we collaborate directly with freelance translators. We often spend hours discussing the best way to write the source and translate one string. Because we are working mostly in none-tier 1 languages, we face many day-to-day challenges of running a global localization team. We find that communication is key to success,” he added.

Currently, Juntos and its linguists use Transifex as a translation tool. “Transifex is lightweight enough to allow our freelance linguists to log in from in-country and offers robust enough technical features for their work,” said Illetschko.

Some of the most important localization management actions, according to the localization director, are applying localization 101 standards such as style guides, using XLIFF as a file standard, Translation Memory to increase repeatability, and conducting translation tests while hiring linguists.

“When possible we reuse TMs across projects of same languages. We have done back-translation TM hacks with existing translated messages to minimize translation costs of user conversation which saves thousands of dollars each time”

“When possible we reuse TMs across projects of same languages. We have done back-translation TM hacks with existing translated messages to minimize translation costs of user conversation which saves thousands of dollars each time. As our needs change within a rapidly evolving environment we are starting to explore transcreation and specific translation for mobile content strategies,” he disclosed.

Automation at Juntos, however, refers to the company’s “ability to answer our user’s responses to our text messages automatically, rather than machine translation (MT),” according to Illetschko.

“From a traditional software localization perspective, I do think that MT has a place, especially in the translation of documentation. But translating legal or financial educational or marketing materials are a long shot from being able to use MT. The language is usually too nuanced. In fact, even though we have a completely human approach, it is still extremely challenging to reach the appropriate translated text,” he explained.

“We have an automated conversation platform where people — when they are text messaging — talk back and forth with the Juntos assistant,” explained Knelman in a corporate video.

Illetschko affirmed that the software automatically delivers a script of conversation to users and is able to respond to inquiries with a set of pre-existing (and human translated) content. “Ultimately, the outcomes of different conversations are evaluated and we scale up the most effective conversations from hundreds to thousands to millions of users,” he said.

In the meantime, the company expects that demand for linguists will increase in tandem with increasing project load. “We usually collaborate with two to three linguists per language and expect this to continue,” Illetschko disclosed.