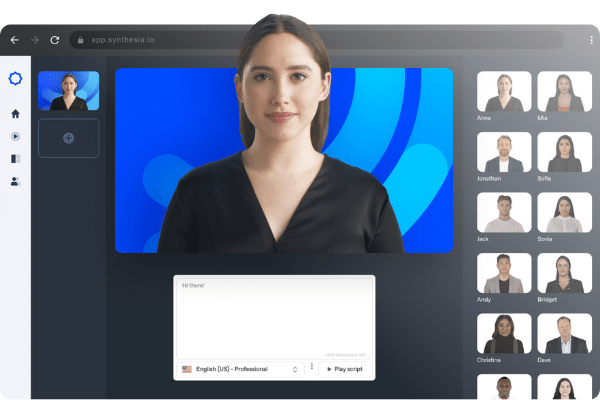 On December 8, 2021, AI video platform Synthesia announced that it had raised USD 50m in series B funding. The round was led by Josh Coyne from Kleiner Perkins, with the participation of GV (formerly Google Ventures).

All existing investors in Synthesia — including Firstmark Capital, LDV Capital, Seedcamp, and MMC Ventures — also participated, as did a number of angel investors, including Patrick and John Collison (Stripe), Anne Raimondi (Asana), Soleio Cuervo (Facebook / Dropbox), among others.

Synthesia raised USD 12.5m in series A funding in April 2021 following a USD 3m seed round in 2019. CEO and Co-founder Victor Riparbelli told Slator their Series B comes “on the back of some very, very significant traction on our end over the last 14 months.”

Synthesia was founded in 2017 by entrepreneurs Riparbelli and Steffen Tjerrild along with computer vision professors Matthias Niessner and Lourdes Agapito. They tripled their headcount in 2021, and now employ 60 people, Riparbelli said.

Synthesia is an AI video-generation provider that enables users to create scripted videos using pre-loaded avatars or by creating their own. It is a solution for non-pros. As Riparbelli explained, “We work less with professional video production departments and much more with anyone at the enterprise who used to produce PDFs and slide decks, for example. Think business analysts, office managers, learning instructors, consultants.”

Despite not having focused much on marketing, so far, the company has developed a client base; according to Riparbelli, “around 10,000 customers ranging from smaller individual businesses to the larger enterprises.” Synthesia counts advertising giant WPP and consulting and auditing firm EY as customers.

The use cases for Synthesia-generated videos span the range of internal training, learning and development, sales enablement, and sales prospecting. Riparbelli told Slator, “25% of the people who today use PowerPoint on a weekly basis will eventually be using Synthesia in their professional lives.”

“We work less with professional video production departments, and much more with anyone at the enterprise who used to produce PDFs and slide decks” — Victor Riparbelli, CEO, Synthesia

Asked about the market opportunity for AI videos, Riparbelli said, “There’s been a rapid surge in demand for video and audio content in the enterprise — because text is just not a great way to communicate with people in 2021, particularly the younger workforce.”

Over the longer term, the CEO envisages expanding into entertainment and advertising use cases, “and eventually Hollywood films,” he said. “But for the next five years, we’ve got to be focused pretty heavily on this kind of business communications.”

A key feature of Synthesia is its portfolio of multilingual voices. Users input their video script as text in any of 60-plus languages, and then select the relevant language for the avatar to speak aloud. Users can simply click to add same-language subtitles to their video based on the original script, while translated subtitles are likely to be supported in future.

“[LSPs could] jump in, translate the text, and render out the video” — Victor Riparbelli, CEO, Synthesia

Synthesia does not offer translation services internally. Rather, Riparbelli said they are keen to enable clients to “work in an easier way with translation agencies” and are currently exploring how to facilitate faster, better video translation in the future.

One way to get there would be to add a button in Synthesia (e.g., “Translate this video”), which provides users with access to third-party translation providers (LSPs). And then the selected LSP could simply “jump in, translate the text, and render out the video,” Riparbelli explained.

Synthesia will use the funds raised to focus on growth and develop their product further. This means some funds will go toward investing into “longer-term R&D that might not materialize into the product in the next two or three years,” Riparbelli said. Such as 360-degree characters.

While, today, Synthesia is known for videos with front-facing avatars, Riparbelli said they eventually aim to create dynamic, 360-degree characters that will be required to support advertising use cases, for example. To do so, Synthesia will spin up a studio in Central London to work on capturing high-fidelity, 3D data of people.

Riparbelli said they also plan to increase marketing efforts and do “more targeted outreach to build the learning and development sector, where we have quite a strong product-market fit.”