The world’s most valuable listed language service provider (LSP) delivered another impressive set of results. Revenues at UK-based patent and life sciences translation provider RWS rose 35% to GBP 76.6m (USD 97.6m) for the six months ended March 31, 2017, compared to the same period in the prior year.

The figures include a full contribution by CTi (acquired in late 2015) and a six-week contribution by LUZ (acquired in February 2017). RWS bought the two LSPs to enter and build out its life sciences translation business. Like-for-like revenue growth (adjusted for acquisitions) still came in at a relatively strong 10%. The group’s headcount now totals 887, which includes a large contingent of internal translators.

The bulk of RWS’s revenues and profits still derives from its Patent and Commercial Translations UK division. However, with CTi and LUZ acquisitions, the group has grown the Life Science’s share from virtually zero two years ago to nearly a quarter today. 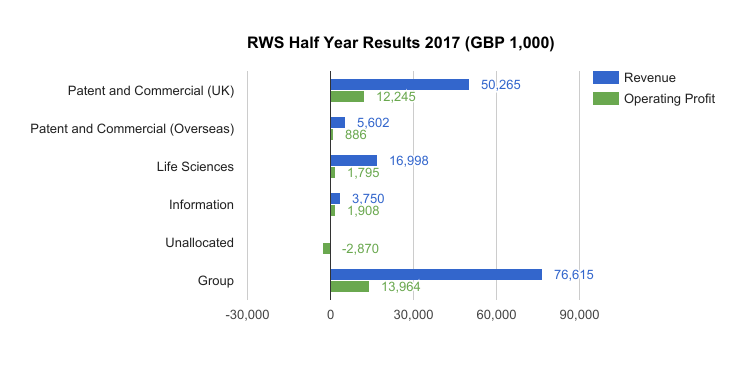 In its earnings comment, RWS highlighted the continued growth in its core patent translation and filing business. International patent filing was traditionally done by patent attorneys who engaged freelance linguists to provide translations. Over the past decade and a half, RWS streamlined that process, creating a market it now largely dominates.

In life sciences, the integration of CTi and LUZ appears to be on track. LUZ’s previous owners Sanford Wright and Monique Rivas have exited the business. RWS assures investors, however, that LUZ’s senior operational team has transitioned well and now reports to Sheena Dempsey, who RWS hired from Lionbridge in 2016 and who is now Managing Director of RWS Life Sciences. 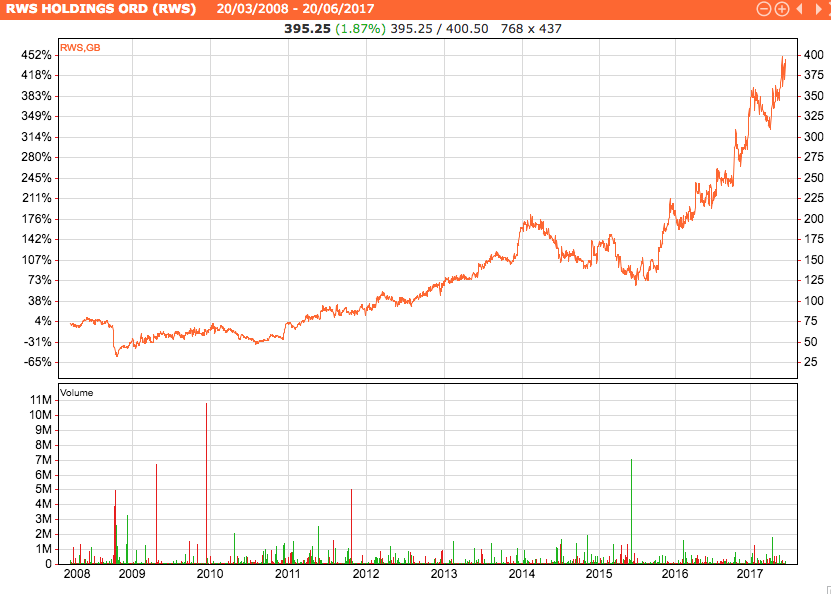 Slator discussed the results with Chairman Andrew Brode and CEO Richard Thompson. Asked where demand for RWS’s shares comes from, Brode pointed to a generally buoyant mood in global markets as well as demand from large institutional investors such as Liontrust.

“The business was built on referral” — Andrew Brode, Chairman, RWS

He also highlighted another important driver. RWS is listed on the UK’s Alternative Investment Market (AIM) market. AIM-listed shares are exempt from inheritance tax if an investor has held them for two years or more. According to Brode, the few dozen funds which have specialized in spotting attractive AIM-listed companies have become significant investors in RWS (approximately 20%) and are “rather sticky shareholders” given the two-year rule.

RWS is not known for its aggressive sales approach and has generally been very low key in its marketing efforts. Asked about the company’s sales approach, CEO Thompson disclosed the RWS has around 30+ sales people in total – about 15 in the United, 10 in Europe and the rest in Japan and China. Still, major lead sources, according to Thompson, are recommendations and trade shows.

“The business was built on referral,” Chairman Brode explained. He said that when Huawei (now one of RWS’ top 10 clients) went international with patents and established their head office for Europe in Germany, they hired the number two patent executive from Siemens (a large and long established RWS client). “The moment he set up Huawei’s Europe HQ he came straight to us and said we would like you to work for Huawei,” Brode remembered.

For future acquisitions, RWS continues to focus on the life sciences and IP space. Asked whether deals in what RWS calls commercial translation are also on the table, Brode said they are not a major priority. “That’s of course where we have the most direct competition,” he said. Brode added, “the problem (with companies in commercial translation) is that their margins are usually not very exciting and (with an acquisition) we’d effectively be buying market share and, by the time we have applied our pricing and quality controls, quite a bit of that market share may have melted away.”

We Would Never Buy TransPerfect

Asked whether RWS is participating in the TransPerfect sales process, Brode quipped: “If you got one, I’d like to get a copy of the information memorandum.”

He continued in no uncertain terms: “We would never be buyers of TransPerfect. We don’t have a high opinion of the quality of their work. We regard them as more of a sweatshop and a very sales-driven organization. We, of course, compete with them in some areas. They are big in life sciences. And we occasionally run into them offering ridiculous pricing in patent translation. So, we would not be buyers of the whole of TransPerfect by any stretch of the imagination.”

And with that, Brode removed RWS from any long- or short-list for a potential acquisition of TransPerfect.

Slator also wanted to know more about technology at RWS. For translation productivity, the company is an “extensive user” of SDL Trados in the IP business and increasingly also in the life sciences business. In terms of translation management and ERP, RWS has not integrated recent acquisitions and the patent business, CTi, and LUZ each run their own TMS.

“As NMT improves and becomes more commercial, we will be turning our internal translators into post-editors” — Andrew Brode, Chairman, RWS

“We have over 100 internal translators,” Brode said. “They are our most expensive resources. As NMT improves and becomes more commercial we will be turning our internal translators into post-editors. And so the checkers we use at the moment will be dispensed with.” 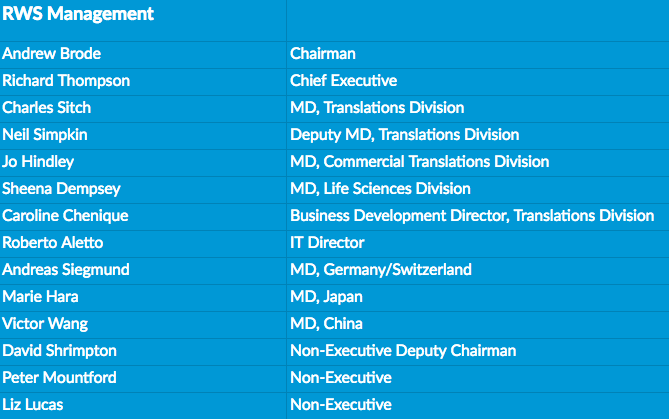 Finally, with the results announcement, RWS disclosed for the first time the names and positions of its senior management.