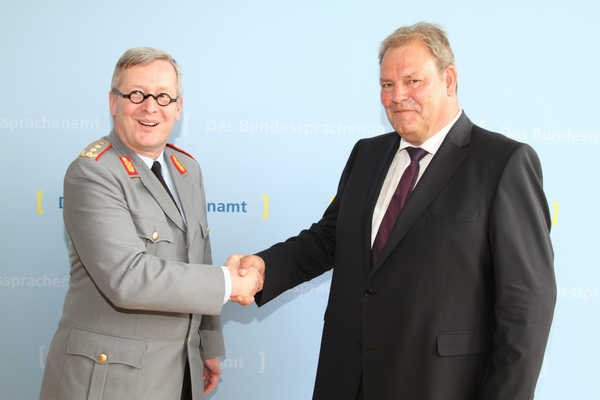 Germany’s Federal Office of Languages has appointed a new boss to head its 1,000 strong workforce. Dietmar Johannes Zimmer heads the “Federal Office of Languages”, a so-called higher federal authority that reports to the Federal Ministry of Defence. According to its website, the Office “meets the linguistic needs of the Bundeswehr as well as of other federal and regional ministries in the field of language training.”

The translation and interpretation volumes processed are considerable. According to a press release, the Office translates around 170,000 pages and logs over 20,000 hours of interpretation annually. Furthermore, the Office provides foreign language courses to over 15,000 people every year and provides German lessons to up to 700 members of allied armed forces. The Office operates across more than 60 locations.

Zimmer was officially inducted into his new role by Lieutenant General and Head of Personnel at the Ministry of Defence Klaus von Heimendahl at a reception attended by 300 people on May 23, 2018.

Zimmer is new to the language service space. The 61-year old has a legal background and, prior to his appointment at the Federal Office of Languages, was the Head of the Germany Ministry of Defence’s vehicle fleet service, a unit that in 2017 employed around 500 staff.

According to its website, the Linguistic Services Division’s responsibilities include:

Meanwhile, in the private sector, Germany continues to be an extremely fragmented market with hundreds of small language service providers competing for business from the country’s big corporations. At USD 54.6m annual revenue, KERN Global Language Services was the only Germany-based provider to make it into the 2017 Slator LSPI.