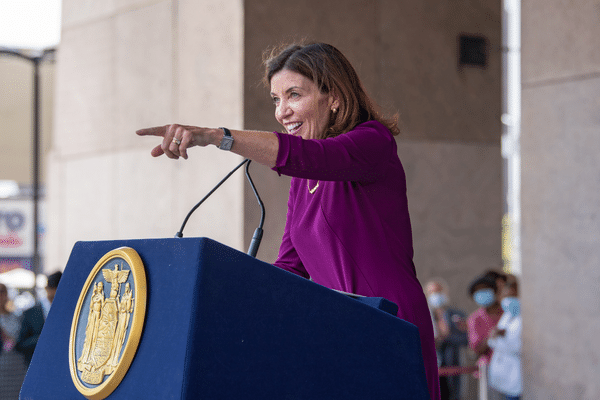 New York State Governor, Kathy Hochul, announced on October 3, 2022 that the Office of Language Access (OLA) is now open for business. The agency will provide oversight and guidance for state executive agencies in applying legislation and policy related to residents of limited English proficiency.

New York State already had a language access policy. It was put in place through a 2011 Executive Order by then-governor Andrew Cuomo. At the time, government agencies were required to translate documents into six commonly spoken languages. In 2021, the number of languages increased to 10.

A new allocation of USD 2m for the OLA is part of the state’s FY 2023 Enacted Budget. It makes good on a commitment made by Governor Hochul earlier in 2022 to improve and expand language access.

The expanded law took effect in July 2022 and requires all agencies in charge of state programs to provide interpretation services in any language and translation of “vital agency documents” into 12 commonly spoken languages.

The top 12 languages were chosen based on Census Bureau data. They are Arabic, Bengali, Chinese, French, Haitian Creole, Italian, Korean, Polish, Russian, Spanish, Urdu, and Yiddish. Each agency will also have the ability to expand services into up to four additional languages based on local needs.

Today, we're launching the Office of Language Access — part of our nation-leading work to make it easier for all New Yorkers to access services.

By tearing down language barriers, we're showing that Lady Liberty's message rings true: New York is welcoming to all.

The OLA operates within the state’s Office of General Services. The latter is responsible for managing contracts with language services providers (LSPs). Under the new legislation, each applicable state agency must designate a language access coordinator “to ensure compliance and measure performance.”

All requirements under the OLA’s oversight are effective immediately, as an initial planning period of 90 days after the law’s enactment in July 2022 has now passed. Agencies will also have to post a new Language Access Plan every two years following a list of requirements on the OLA website.

US Census figures indicate that more than 5.7 million people in New York State speak a language other than English. Given the increase of economic migrants and refugees entering the US in 2020 and 2021, the general expectation is for these figures to increase regionally.