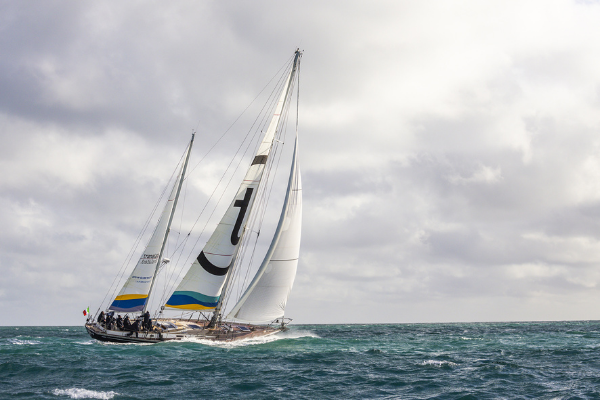 Rome-based language service provider Translated has announced that it will participate in Ocean Globe Race 2023, which will see sailors navigating vintage boats around the world sans modern technology or equipment.

The regatta follows last winter’s creative coup, the short film Lara. Asked why they would embark on such a gruelling, physical journey, Patrizia Boglione, Creative Director at Translated, quipped, “It’s the way we work here. No challenge is impossible.”

If the short film Lara depicted the dedication and skills of translators and interpreters, the global regatta represents “how linguists connect people and cultures across vast oceans,” said Communications Manager Chiara Sansoni.

Marketing VP Daniele Patrioli admitted they immediately realized how counterintuitive it was for Translated to compete in Ocean Globe Race, where they could only rely on ancient tools to navigate — no mobile phones or GPS: “We’re a company specializing in AI technologies, but we’re taking part in an adventure where modern technology is not at all allowed.”

“If you focus on great humans skills, you can achieve anything” — Marco Trombetti, CEO, Translated

However, when they broached the idea to Translated’s partners, they were amazed at the positive response. This fueled the team to start turning the idea of joining a regatta into reality. “We thought to ourselves that maybe this crazy idea wasn’t so crazy after all,” Patrioli said.

He explained that although Translated is indeed AI-driven, the foundation of their success is people more than technology. Patrioli said racing in a regatta that will traverse the globe is another way of paying tribute to “the powerful network of partners from all over the world, their resilience in the face of challenges, and our desire to develop a deep connection with them.”

With the Translated team and partners on board, the next step was to find a race-worthy vessel to sail in. They found one in the ADC Accutrac, which was captained by the first woman to helm a boat in the same regatta.

The skipper was Clare Francis, who steered the boat to a fifth-place finish in 1977. The following year, Francis, a British novelist, was awarded an MBE (Member of the Order of the British Empire) for her services to sailing.

The boat has been rechristened Translated 9. Its crew will race under the Flyer Class in 2023, the 50th anniversary of Ocean Globe Race, which was previously called the Whitbread Round the World Race after its first sponsor.

The crew will train in Italy and the US and comprise anywhere from 32 to 48 members — linguists, localization managers, language experts — anyone with a passion for sailing.

Boglione said, “We would like to invite translators, interpreters, clients, partners, anyone from the global language industry, to participate. This is not just a challenge for Translated, but for the entire localization industry. The more people who join, the better.”

Calling all amateur sailors or anyone with a passion for sailing and is willing to train for Ocean Global Race 2023, click the Join the Crew button here.

Crewmembers in Rome have already started training aboard Translated 9 during weekends. In San Francisco, participants led by world champion Paul Cayard will be assigned a second boat and begin training in September 2021. Both groups will train for the next couple of years.

The crew will comprise 12 people on any given leg. Three will be professional sailors, and the rest, amateurs. Translated founders Marco Trombetti (CEO) and Isabelle Andrieu (Chairwoman) will each participate in at least one leg.

The three pros will stay aboard for the entire four-leg race, while the rest of the crew can disembark at any of the four ports and hand off their spots to other sailors.

Safety measures will be in place for tracking boats and ensuring the safety of participants, and standard radios will be used to communicate with organizers. As for documenting the race (since digital devices are banned), the team may use a Super 8 or Polaroid camera.

Even before they formally opened the application process, people already started applying, according to Boglione. There are 10 applicants from Translated, thus far, and about a hundred from other companies.

“We will try to build as diverse a team as possible — various age groups, nationalities, genders — to show that diversity is a great way to overcome a challenge. And because our CEO, Marco Trombetti, a very competitive person, is racing, we have to win,” Boglione said.

The regatta begins in Europe in the latter part of 2023 and will cover four continents — South Africa, Australia and New Zealand, South America — before returning to Europe in spring 2024. Crews may sail up to 50 days without stopping at any port.

Join the Translated 9 crew for Ocean Global Race 2023 and embark on a once-in-a-lifetime journey!

As mentioned, no modern navigation, communication, or weather-forecasting equipment will be allowed. Instead, the crew will rely on celestial navigation equipment (e.g., sextants), barometer readings, and other old-world methods to complete the 7-month, 27,000-mile journey. This will highlight human skill over technology.

According to Sansoni, “The regatta has used the same kinds of boats and equipment for 50 years. Although we are a pioneer in AI, we believe in humans. Only human values and skills can face down this challenge of going against nature with the passion and commitment of dreamers.”

Main image: Translated 9 is a Swan 65 (All images from Translated)