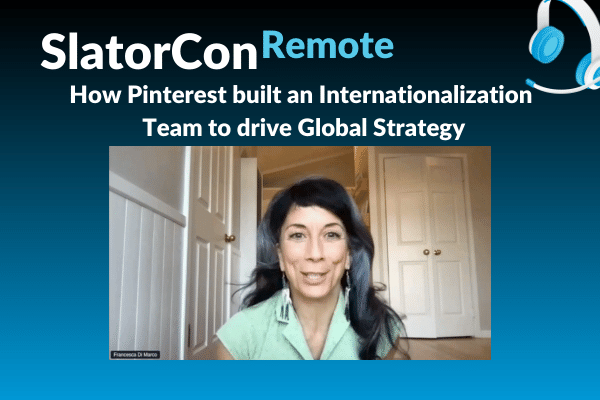 Francesca Di Marco, Internationalization Lead at Pinterest, was localization employee No. 1 at the creative social media platform (or “visual discovery engine” as the tech unicorn likes to put it). As such, Di Marco told the SlatorCon Remote September 2021 audience, she had a blank canvas on which to design the team the way she wanted.

From a unit that provided the organization with translation services in the early stages, Di Marco developed her team into one that impacts global growth at Pinterest by providing key strategic support.

According to Di Marco, internationalization sits within the product organization at Pinterest — something she described as “definitely beneficial” as it positions them that much closer to international growth.

Today, as a strategic support unit, Di Marco’s team also contributes sentiment analysis and copy-tuning, international SEO, creative production, and so on. And because their goal is to ensure that everyone finds inspiration on Pinterest, Di Marco said, “our responsibility is to ensure that these users are represented in our product globally.”

“We needed awesome vendors who could step up in terms of responsibilities and whatever they could take on in terms of processes and localization” — Francesca Di Marco, Internationalization Lead, Pinterest

According to Di Marco, “We reach over 450 million monthly active users and over 65% of our user base is from outside the United States. These users sit in over 200 countries and territories.”

To build this kind of global reach, Di Marco decided that she wanted a centralized team with the ability “to focus on building ties with our cross-functional partners.” She explained, “I wanted a core team of superstars who could strategize and persuade our engineering teams. Engineers are pretty much like 60% of our company.”

Crucially, Di Marco sought out program managers rather than project managers. She said, “I wanted teams that focus on building partnerships internally — and then we could outsource anything else, as much as possible, to vendors. This meant we needed awesome vendors who could step up in terms of responsibilities and whatever they could take on in terms of processes and localization.”

Asked by a member of the online audience why centralization was important, Di Marco replied, “The team is centralized in the sense that there is one team at Pinterest. So I didn’t want to separate the team from marketing, product, and so on. We wanted to leverage assets — TMS (translation management system), for example — but we also wanted to have a centralized place where we could receive internationalization requests.”

This also gave the team “greater visibility in terms of whatever is coming, whatever other teams are updating or working on.” She qualified, however, that her team is actually distributed in “numerous locations around the world because we use a follow-the-sun model.”

Di Marco told the audience, “I primarily use Pinterest for planning activities with my kids, planning my treats, my outfit, checking on recipes. But, as a company, our mission is to bring everyone the inspiration to create a life they love.”