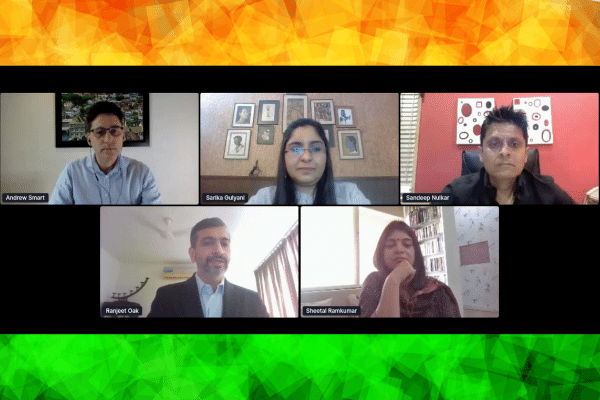 Inside India’s High Growth Language Industry, Slator’s well-attended online conference on November 18, 2020, focused on the world’s fifth-largest economy with a GDP of USD 2.9 trillion; expected to soar to USD 5 trillion by 2025.

This despite the impact of Covid, as pointed out by conference moderator and Slator Commercial Director, Andrew Smart. Moody’s forecast a return to 8% growth next year, Smart added.

While many factors drive growth in India, one of the most significant is mobile Internet penetration — “currently up 50% and rising fast,” according to Smart. “Affordable smartphones and mobile data plans are forecast to help increase penetration to one billion users by 2025. This presents great challenges and opportunities for the Indian language industry.”

These challenges and opportunities were highlighted by Esther Bond, Research Director at Slator, who presented the results of a survey conducted among India’s language service providers (LSPs) in August and September 2020.

Bond said the primary business challenge relates to sales and growth, followed by the availability of linguistic resources. “A little more than half the respondents said they’re seeing a decline in rates, around a fifth said they saw significant impact from Covid-19, while many others said they were seeing no impact at all,” she said.

One of the biggest challenges has to do with machine translation (MT), identified by India’s LSPs as the biggest external threat to their business, Bond said, adding that it was also named as the most significant industry megatrend. Thus, MT also presents a huge business opportunity.

But unless MT vendors offer India pricing, they will not achieve scale in India. If they do, the India market is likely to be a lucrative one for MT providers, Bond quoted Sandeep Nulkar as saying. Nulkar is President of CITLoB or the Confederation of Interpreting, Translation and Localisation Businesses, which, in tandem with Slator, conducted the survey.

Bond also discussed which language tools are most popular in India, specific growth areas (e.g., e-commerce, e-learning, OTT or streaming), customer trends, and much more. She encouraged participants to check out the detailed survey results and analysis of the India language market, available free on Slator.

Up next was Sarika Gulyani, Director and Head of ICT and Digital Economy, as well as FICCI-ILIA, a division of FICCI. The biggest chamber body in India, FICCI has been around since 1927. FICCI-ILIA was founded in 2017. (FICCI stands for the Federation of Indian Chambers of Commerce and Industry; ILIA is the Indian Language Internet Alliance.)

Gulyani explained that these bodies were set up to represent different stakeholder groups and encompass innovation, networking, technology, community development, advocacy, and so on. She highlighted the fact that “India is a country with the second highest number of Internet users” (i.e., 745 million strong), while content in vernacular languages is scarce.

Ranjeet Oak concurred, noting that, “There are certain gaps that need to be crossed before we see the actual conversion of the online space in India into a language of choice for the consumer.” Oak is Chief Commercial Officer of the India division at global beverage giant Pernod Ricard.

Oak went on to explain in detail the top three barriers that companies face in India: cost, capacity, and context. In terms of cost, for example: If a company has to translate descriptions for millions of products into six primary Indian languages, “you’re going to end up with a [huge] bill, and you’re not even sure of that kind of return.”

Oak added that while businesses still operate on a per-word cost, it will be extremely difficult to unlock substantial value. “It needs to move away from being a high-touch, concierge kind of industry to a low-touch volume kind of industry,” he said.

As for capacity, Oak noted the “mismatch” between available supply and the speed or agility with which translation is needed by businesses; and context is critical as well because “As a brand owner, I am actually very worried about getting something wrong online because it can stay forever!”

Also present was Sandeep Nulkar. Aside from being CITLoB President, Nulkar is Co-founder and CEO of LSPs BITS International and Vernac Language Technologies. Taking off from his Slator-CITLoB survey analysis of the hot-button topic of machine translation, Nulkar said, “Translators need to move away from the translator’s mindset to a post-editor’s mindset.”

He explained: “Because Indians’ speech is mixed, that means we always speak a combination of English and some Indian language, effortlessly switching between these two languages. The problem here is, it’s very easy to say machine translation is the future. But I see a major mindset issue.”

The typical translator mindset will focus on what’s wrong with the MT, “and thereby be very unhappy about having to edit a lot of content within a given sentence,” Nulkar said. The post-editor’s mindset, however, is “really thankful that you don’t have to type out an entire sentence or parts of it; and, at least, some of it is not bad.”

One way to speed up the paradigm shift is through training, Nulkar said, adding that CITLoB has already started exploring training opportunities for its members.

Sheetal Ramkumar, Founder and CEO of LSP White Globe agreed with Nulkar, pointing out the need to break away from bias against MT; that is, the common opinion in the Indian market “that machine translation is cheap and, therefore, the quality is not good enough for the consumer.”

She said, “To break into Indian languages is going to be a tough thing for machine translation, but there is no escaping this. We have to embrace machine translation if you are going to talk about faster turnaround times, better productivity, pricing, value for money, all of that.”

The online conference ended with an open forum where the panelists fielded questions such on how the India language market measured up against the likes of China as a hub for the translation of Asian languages going forward; as well as how a company would, based on actual practice (1) roll out a product or campaign, (2) select an LSP, and (3) target the market.

A full recording of the online conference is available on Slator’s On-Demand channel.