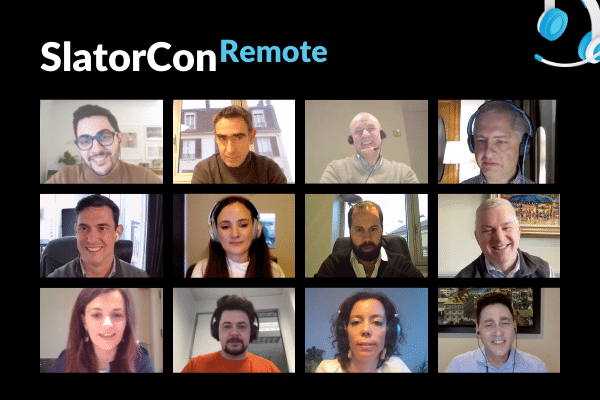 On December 3, 2020, before 9 a.m. EST, more than 250 people from 30 countries representing all continents fired up their devices to join the second SlatorCon Remote 2020. As with previous editions, virtual or live, the conference was packed with quick, back-to-back presentations followed by a Q&A with speed-networking sessions in between.

Andrew Smart, Slator Co-founder and Commercial Director, kicked off the series of presentations by, as he pointed out, “six CEOs, a CMO, and three enterprise clients all in a highly focused, four-hour program.”

Florian Faes, Slator Managing Director, was up next with the most exciting developments of 2020 and what’s in store for the global language industry in 2021. Faes “followed the money” as he tackled M&A highlights, tech investments, public sector demand, the jobs landscape, and emerging business lines for language service providers (LSPs). He capped his presentation with a forecast covering M&A, process automation, and the natural language space.

Next on stage were Acolad Group’s Benjamin du Fraysseix, President, and Olivier Marcheteau CEO, who discussed the company’s M&A strategy in detail. Du Fraysseix shared what he described as the “intense journey” of the last five years. He said Acolad has emerged as a truly “multilocal company with 2,000 employees worldwide,” achieving recent significant growth through its acquisition of AMPLEXOR.

The Acolad leaders explained how they adopted four levers for an M&A strategy that could bring more than just organic growth. According to du Fraysseix, “We are strongly dedicated to pure language services today. We’re operating mainly in the written language services industry. And our next move is to go deeper into the data management value chain; meaning not only written and oral language services, but much more.”

Marcheteau also provided an update on the integration of AMPLEXOR into Acolad, adding, “What we’re busy doing right now is making sure we capture the quick wins and the things we can land very fast to generate upside on both sides.” The duo then finished the track by fielding questions on how to find the perfect match when identifying M&A targets and activating synergies post-sale.

“Regulation is part of the daily business. It drives how we work” — Aurélie Baechelen, Localization Manager, Varian Medical Systems

The discussion revolved around localization demand and how regulation factors into the localization process. “Regulation is part of the daily business. It drives how we work,” Baechelen said. She explained how it defines how Varian reaches out to external vendors and qualifies suppliers, down to how a translation is performed and all evidence of the process archived.

Aside from regulation, there is also the impact from when a new medical device regulation replaces an old directive, as took place in the EU. Medtronic’s Magalhães said, “It brings major requirements, both for pre-market and post-market clinical evidence, for R&D, quality, and labeling.” She added that new directives can even force organizations to rethink certification strategies.

The panel also covered how to manage risk in the localization workflow within the regulated context, the concept of hybrid localization or procurement modules, as well as the tools and tech used in medtech localization. The group then fielded questions from the audience on their companies’ R&D strategy, how Agile Software Development feeds into the localization process, and the adoption of machine translation (MT).

About the latter, Varian’s Baechelen said, “There’s great interest, at my company at least. The big question is how do you fit MT into the regulatory framework. For example, how do you document the process? How does post-editing fit into the certification for medical devices?”

Konstantin Savenkov CEO at Intento was next on stage to delve into the barriers to and strategies for enterprise MT adoption, and why a traditional approach to integration will never work in certain enterprise scenarios.

The Intento CEO said that one barrier to MT integration is the long supply chain. “The actual effort is hard to track across all subcontractors and TMS, CAT, and project management systems. Existing metrics are [also] hard to adjust; another reason is the [un]certainty of quality. If for some reason it didn’t work, a small discount may be absorbed by LSP margins or projected to subcontractors.”

This, among other factors, Savenko pointed out, leads to the fear of losing business. He then outlined popular approaches to overcoming these challenges and cited cases where adopting MT resulted in huge productivity gains.

Next on the agenda was Lionbridge CMO Jaime Punishill. Speaking on digital marketing transformation, Punishill said he was surprised at how many organizations discovered that they were doing a Kabuki-theater version of it when Covid hit. “They were trying to be agile, but hadn’t really rethought the process top-to-bottom, trying to be digital first,” he noted.

“Many organizations found they were really doing a sort of Kabuki theater version of these things. They were trying to be agile, but hadn’t really rethought the process top-to-bottom, trying to be digital first” — Jaime Punishill, CMO, Lionbridge

Punishill then covered seven digital transformation trends and used Lionbridge’s 2018 rebranding as a case study. The Lionbridge CMO also shared the tactics they used (including hard data and what the company spent on) to drive traffic to their website and increase overall brand visibility.

To cap his talk, Punishill answered questions on how the Lionbridge marketing team is structured, what percentage of sales is spent on the marketing budget, and how much spend on online marketing would make sense for an LSP.

Three CEOs on the Future of TMS

Joining the next panel from just outside London in the UK was Bob Willans, CEO of XTM International. Speaking from Hungary was Balázs Kis, Co-CEO of memoQ. Live from New York was Jack Welde, CEO of Smartling. Slator’s Florian Faes moderated the panel from Switzerland. The topic, the role of translation management system (TMS) technology and localization management in the language industry and its future.

At times diverging in their opinions, the three CEOs weighed in on the topic of connectors as a differentiator in the TMS space, machine translation, developments in the broader natural language processing (NLP) space, what enterprise customers need and want, the projected shift in pricing models, and much more.

Opposing views spiced up proceedings. For example, while Willans explained why XTM decided against producing its own MT engine, Smartling’s Welde said he thinks “machine translation is going to be much more important, and we think that companies need to own that capability of being able to provide that level of service.”

“Machine translation is going to be much more important, and we think that companies need to own that capability of being able to provide that level of service” — Jack Welde, CEO, Smartling

Meanwhile, Kis said his views diverged from his fellow panelists’ as memoQ’s take is to focus on integrating machine translation. He said, “Just like resources, just like connectors, we integrate with as many machine translation frameworks and engines as possible. We also believe in getting translators, reviewers, participants in the process the best available productivity tool, the best available resources, and the interface, so they don’t have to worry.”

As for the future of the industry, Smartling’s Welde said it will rely on “not just technology only or services only. The real winners in this space are going to have to figure out how to combine both of these in a solution that meets the customer’s real need.”

XTM’s Willans concluded by saying that any sensible enterprise will, in the future, want to have a vendor-neutral TMS so it can control assets, monitor progress, and compare suppliers, “moving between one and the other, completely seamlessly.”

Winding down the conference was Alex Katsambas, Head of Linguistic Services at Farfetch, a luxury retail fashion platform for 1,300 of the world’s best brands, boutiques, and department stores.

“We want to push out 2.5 billion words this year, which is almost double from what we were doing about a year and a half ago” — Alex Katsambas, Head of Linguistic Services, Farfetch

“We want to push out 2.5 billion words this year, which is almost double from what we were doing about a year and a half ago. So there’s been an acceleration in more online content as we go,” Katsambas told the SlatorCon Remote audience.

He also talked about how the company’s language analysts operate and how metrics impact localization. Katsambas cited a recent case where they successfully proved that certain relatively small markets (e.g., Dutch, Swedish, Danish) needed language support as well. He concluded by sharing his view on machine translation’s role in accelerating digitization and growth online.

SlatorCon Remote December 2020 ended by opening its session rooms to all participants for networking.