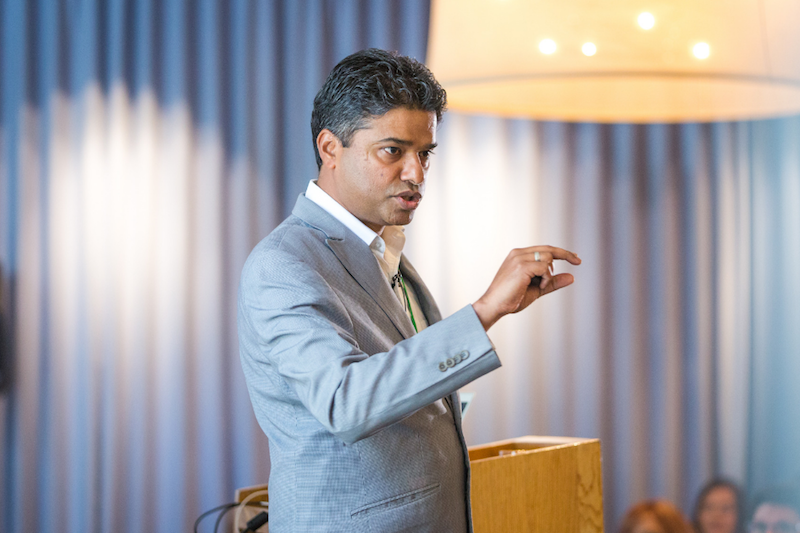 Ferose V R, Senior Vice President and Head of Globalization at SAP, gave the opening keynote presentation at a sold-out SlatorCon San Francisco 2018. He spoke about his experience of leading the enterprise software company’s globalization team of 1200 people, a role which he has held for five years, and gave his take on the biggest enterprise opportunities in the language industry.

SAP localizes into a maximum of 44 languages, depending on the product, an undertaking which would be a major challenge for any multinational corporation. The task of localizing the full suite of SAP products into as many languages is made all the more daunting as new companies continue to join the SAP group. As Ferose explained, SAP “has grown organically and through acquisitions worth more than USD 30 Billion over the past eight years.”

With these acquired companies joining the SAP group, the SAP Globalization Services team is “always working full-steam” as it aims to localize its products into a wide range of languages. Localization across products is an important endeavour from a UX perspective since the end user does not have a consistent experience if one product is translated into a user’s preferred language, but another product is not.

Two of the main markets that Ferose identified as still mostly untapped and ripe for massive expansion were Asia and Africa. The countries that make up these continents are distinct from other burgeoning markets such as Latin America since many (e.g. India) are multilingual, which brings additional localization challenges alongside the huge opportunity that these countries represent, Ferose said.

1.2bn people in India have mobile phones, which means there is a big business opportunity for companies there.

Ferose told SlatorCon participants that his native country of India has 122 major languages, 1599 other languages and 22 official languages. This means that cracking the India market is both incredibly complex and commercially attractive. According to Ferose, 1.2bn people in India have mobile phones, which means there is a big business opportunity for companies there. Moreover, movies, for example, tend to be localized into four languages in one for India.

One “unintended consequence of subtitling” in India, Ferose told the SlatorCon audience, is that it is the “best way to increase literacy,” and has the potential to generate a “reading revolution.” India is home to half a billion people who cannot read, a problem which he believes could be solved through same language subtitling.

For a global company such as SAP, looking to take their solutions to as many people in as many markets, this means delivering a lot of languages, Ferose stressed. Increasingly, companies are requiring more languages and dialects for both internal and customer facing content. Indeed, Ferose said, the opportunity is in the long tail; those languages for which translation demand was much less prominent a few years ago but is now growing as companies see potential in new markets.

For internal content, the right languages must be available to the workforce for there to be equality of access to training material. 20% of the SAP workforce is located in what Ferose called “smaller countries.” Indeed, Ferose’s own team is split across 40 different countries. This creates many challenges as learning opportunities and training material need to be available in the local language the employees are most comfortable with.

Despite the challenges of increasing content and languages, Ferose V R pictures a bright future for the translation industry in the form of human and AI interaction. According to Ferose, there will always be a place for humans in the translation workflow since “the heart of technology is humans” and the role of technology is to “elevate rather than deflate humans”. Ferose believes that the future is the “convergence of three things: translation, transcription and voice” and, while automated transcription is 99% accurate in Ferose’s estimation, translation is not there yet, and nor is voice.

There will always be a place for humans in the translation workflow since “the heart of technology is humans.”

For translation, the role of technology will be in producing the initial machine translation output, while humans will continue to be responsible for the value-add tasks, which Ferose sees as being editing of machine translated content or collaborating with machines in real time. At least for enterprise and other industries where the margin of error is extremely small and quality is paramount, Ferose thinks that humans will always be in the loop since machines will never have the ability to introspect, meditate or be mindful, he said.

The use of voice commands, Ferose said, is on the rise and has increased 35x since 2008. 40% of adults now use a voice command at least once a day and the most frequently used command is “navigate home”, Ferose told SlatorCon. But the complexities of the security concerns relating to voice technology mean that “security will actually slow it down,” and that it may take between three and five years before voice capabilities become mainstream in enterprise software, he added. There is nonetheless a huge opportunity for companies in the integration of voice-based APIs, according to Ferose.

This positive outlook is best summed up in Ferose’s own words: “if people are writing the obituary for the translation industry, I think they are completely off the mark.”