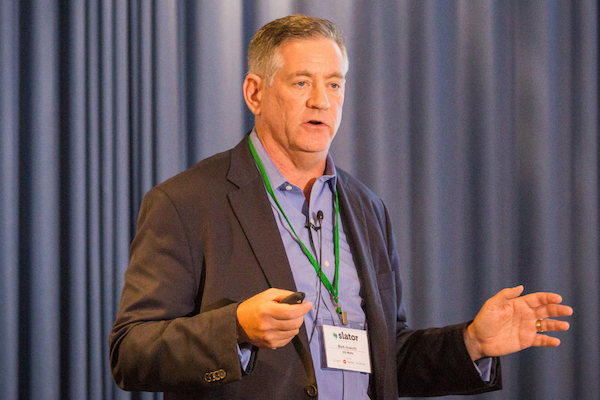 Generating USD 221m of revenue in 2017, SDI Media earned itself a top 10 spot on the Slator LSPI. Los Angeles headquartered SDI Media is the largest media localization company globally and is the highest ranking non-generalist language service provider in the index. Indeed, by its own reckoning, SDI Media is more of a post-production company than an LSP.

With SDI Media and many of the other major media localizers posting double digit top line growth from 2016 to 2017, one might very well think that this is the golden age of media localization.

However, in a packed room at the sold out SlatorCon San Francisco 2018, SDI Media CEO Mark Howorth, debunked this myth : “do not be fooled by the top line growth rates that make this sound really cool and sexy,” he cautioned. Howorth described a growing industry, yes, but one experiencing an onslaught of disruption and turbulence also.


Howorth credited a number of factors with driving turbulence in the media localization industry and discussed the impact of each: from Netflix to talent shortage, and from new entrants and workflows breaking to pressure from procurement.

When disruption becomes the new normal

Of Netflix, he explained that there has “never been a content producer that’s come in and grown as fast as Netflix.” Howorth described how the online streaming giant entered the market and began looking for volume, quality and speed from their foreign language subtitling and dubbing in unprecedented measures. Netflix “reset the bar on episodic quality,” said the SDI Media CEO, and required a huge number of resources to meet their short timeframes.

Hoping to get in on the action, new entrants who saw that there was money to be made from providing localization services to the over-the-top (OTT) market have also emerged. These new entrants, said Howorth, “struggle with delivery and quality,” largely because the bulk of the work is post production and heavy lifting of files not translation. To compete with the incumbents, many have dropped their prices to secure business.

With increased expectations for receiving top quality localized content faster and in multiple formats, Howorth said that existing workflows could not keep pace. Localization companies have had to reach deep into their pockets to redesign workflows that could match the rising expectations of the customer.

“A good translator is worth their weight in gold. But it is challenging to pay them in gold because our customers are not willing to accept higher prices” – Mark Howorth

On the customer side, “the finance departments are paying attention”, said Howorth, pointing to the fact that as volumes have grown, localization providers have found themselves on the procurement teams’ radar. There is also supplier rationalization, which can fall in SDI Media’s favor, said Howorth, since the 1600-person, 37-office company is the largest of its kind and often an incumbent provider. Still, Howorth continued, “having margins put under pressure is a really tough thing.”

But what was an appropriate response to these disruptive factors? Howorth told the SlatorCon audience how SDI Media had to “put ourselves in the shoes of our customer and say ‘if we were starting from scratch and gave the customer a wishlist, what would they want?’” In doing so, SDI Media saw a crucial need to provide customers with speed, simplicity and transparency.

Customers required speed because their deadlines had changed. The industry used to be governed by specific release windows, which dictated the timeline for a title to be released in the theaters, for home entertainment, and for in-flight movies, etc, Howorth said. Now, there is no staggered release, and the industry operates under the concept of “day and date.” This means that when a title is released in one place it is released globally at the same time, in some cases leaving as little as one week from when shooting finishes to when the content has to be put out. To deal with this, SDI Media keeps voice actors and translators on hold, for a price.

Ease of process was also essential for customers, Howorth explained. This means that the media localizer needed to adapt to specific customer workflows and systems, which differ from company to company. One aspect of this was being able to deal with non-finalized content and rounds of updates, according to Howorth. Another aspect was coping with growing volumes of non-English source content, which Howorth says is an “increasingly big issue for our industry” since many companies are historically more geared up to work into or out of English and have limited provision for newly emerging language combinations such as Korean to Thai.

Transparency, meanwhile, means visibility at all times, said Howorth, so that customers can know what’s happening with their content in real time on mobile devices or desktops rather than checking in via email for a status update. As one might expect from a company who has been operating since 1974, the ability to provide real-time status updates was not yet built into SDI Media’s systems. There had been no need, Howorth said, because there used to be ample time.

There is still much to do to keep up in what Howorth sees as “frankly, a very uncertain future.” Firstly, media localization companies need to continue investing in technology, from project management software and machine translation to media asset management (MAM) systems. Moreover, it is important to expand the talent pool of translators and voice actors while maintaining quality standards, which is no mean feat given that 90% of hopefuls fail the tests, according to Howorth, despite appearing qualified on paper.

Some customers “are having to react to Netflix volume using so much of industry capacity” that they are more inclined to commit to volumes in order to ensure capacity for themselves.

Finally, new business models such as end-to-end systems and cost and volume contracts need to emerge to ensure seamless and secure content delivery and lock in the best possible resources. On the plus side, while media localizers may have been hard pressed to convince customers to commit to cost and volume contracts before now, Howorth admits that some customers “are having to react to Netflix volume using so much of industry capacity” so they are more inclined to commit to volumes in order to ensure capacity for themselves.