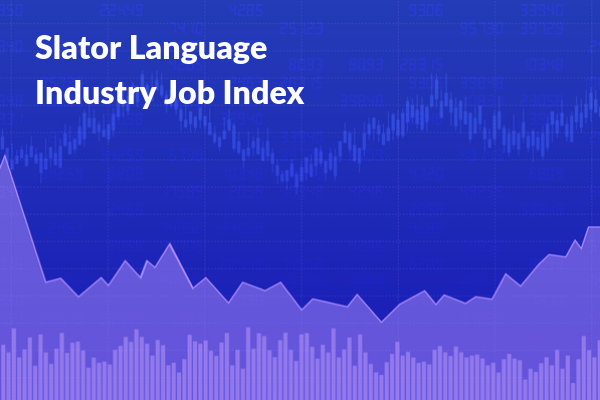 In June 2019, its eleventh month, the Slator LIJI fell to 102.38 down from 103.41 in May 2019. The baseline was taken to be July 2018 (100), the starting point from which to measure expansion or contraction of employment and hiring activity across the industry.

The downward trend in June was reflected in most of the indicators used for the LIJI, including the number of profiles returned using a keyword search for those registered under the Translation and Localization category on LinkedIn, and a number of job aggregation sites monitored by Slator. There was an increase in the number of job postings listed among Slator LSPI companies and on a number of the job aggregation sites monitored, which mitigated the overall decrease.

Observational data relating to activity across the language industry in May 2019 show good indicators of a buoyant industry, with M&A and funding activity continuing strongly, and the generally encouraging performance of a handful of listed LSPs.

In funding news, remote simultaneous interpreting technology startup Interprefy raised CHF 2.875m (USD 2.86) in its sixth and largest funding round, doubling its valuation to USD 21m in the process.

And after more than three years of tracking M&A activity in the language industry, Slator recently took a look at the post-sale career choices of over 100 LSP owners who sold their company. Sign up for Slator Pro to find out where they are now!

New Zealand-based Straker published its first set of full-year results as a publicly listed company having gone public in October 2018 on Australia’s ASX market. Sales for the 12 months ended March 31, 2019 (FY19) came in at NZD 24.6m (USD 16m), up 44% on acquisitions. Organically, the company said it grew 12.6%.

Several news stories highlighted likely drivers of localization demand, such as the roll out of Ukraine’s new localization law and another huge European Union RFP. Meanwhile, the top role at another large cross-border organization, the United Nations, is up for grabs. The UN is looking for a Chief Interpreter to head its Interpretation Service. Across the pond, there is some good news for linguists: the median annual pay for US translators and interpreters climbed to nearly USD 50,000 in 2018.

The Slator LIJI relies on LinkedIn for a substantial part of the underlying data. The site has some 500 million users, many of whom share data about their skills, experience, location, company, and job title on their personal LinkedIn pages. There are over 600,000 profiles under the Translation and Localization category and a search for the keyword Localization also yields over 600,000 profiles.