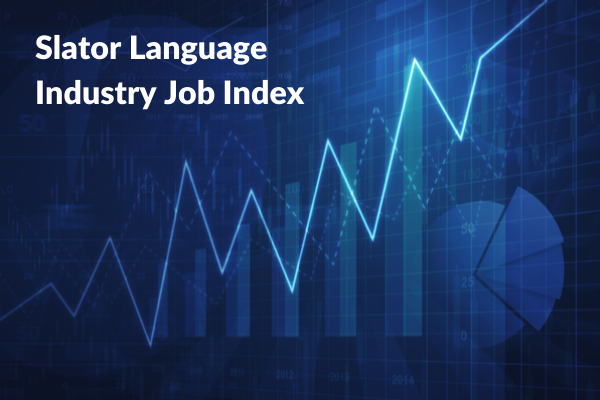 In February 2020, the Slator LIJI rose to 109.59 from 107.69 in January 2020. The baseline was taken to be July 2018 (100), the starting point from which was measured expansion or contraction of employment and hiring activity across the industry.

Observational data relating to activity across the language industry in January 2020 shows a healthy start to the year, with M&A and hiring activity continuing strong, and several companies breaking out record-setting revenue figures for 2019.

And there was a large deal Stateside. AMN Healthcare announced it was buying private-equity-owned interpreting provider Stratus Video for USD 475m, less than a year after Stratus merged with InDemand Interpreting. The deal is expected to close by early March 2020.

It was an active month for earnings reporting, with largely positive results across the board for language service providers (LSPs):

Several news items highlighted likely demand drivers for language services in January 2020, including the publication of an EU award notice naming more than 50 suppliers for a translation contract into 18 languages. Meanwhile, the Netherlands public sector saw some turbulence, as over 1,500 Dutch linguists went on strike to oppose the use of unqualified interpreters within courts and immigration services.

In hiring news, a job posting revealed that the United Nations in Vienna is seeking a new Chief of Interpretation. Slator also reported on key industry hires at several language service providers, including Acclaro, ULG, lengoo, and Peter & Clark as well as Lingotek, Take1, ProTranslating, Language Connections, and Travod. In addition, we tracked 15 buyer moves in the January 2020 Language Industry Buyer Tracker (SlatorPro).

Moreover, results from Slator’s reader polls, published in January 2020, indicated a strong sense of optimism among language industry professionals for 2020, with the majority of  respondents describing their outlook for the year as either “positive” or “very positive.”